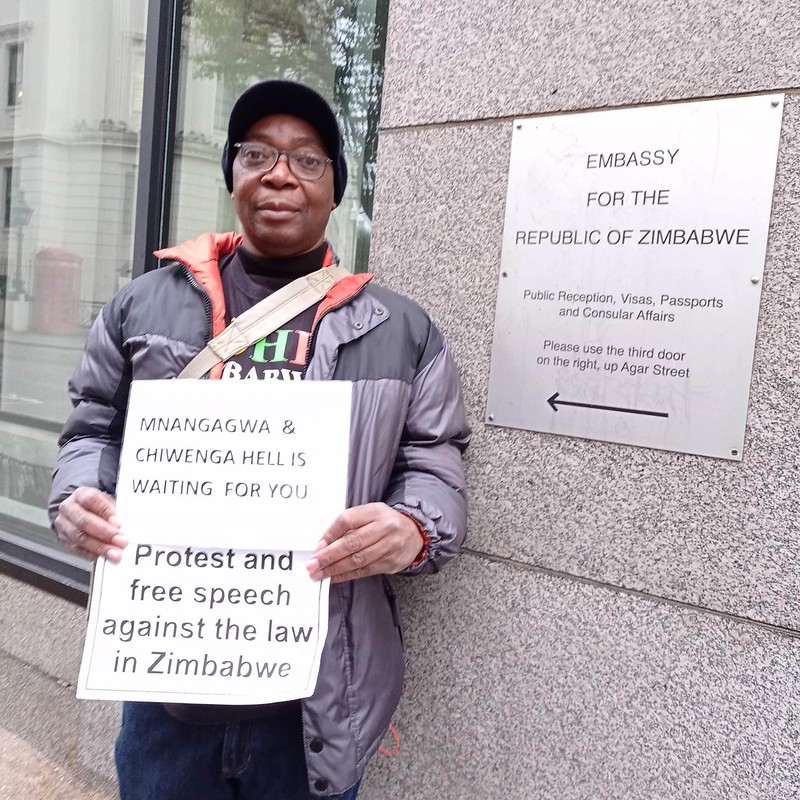 The Vigil was saddened by the sudden death of Dewa Mavinga, the Southern Africa Director of Human Rights Watch. Our deepest condolences to his wife Fiona and their four children and other members of the family.

Among those he supported was journalist Hopewell Chin’ono who tweeted that Mavinga was ‘a great advocate for human rights in Zimbabwe and beyond. A gentle giant who was always there for anyone who was facing political persecution.’

The Africa Director of Human Rights Watch, Mausi Segun, said: ‘We have lost a true gem, a treasure of a person and colleague. We’re devastated by Dewa’s passing’.

We can testify to this as Dewa visited the Vigil and was very supportive of our efforts to bring the human rights crisis in Zimbabwe to public attention here (see: https://www.hrw.org/news/2021/12/04/human-rights-watch-mourns-loss-dewa-mavhinga).

Human rights continues to be a crucial issue in Zimbabwe, where the British Embassy has called for an investigation into the fatal assault of MDC Alliance activist Nyasha Zhambe Mawere by suspected Zanu PF supporters during Nelson Chamisa’s meet-the-people tour of Masvingo in October. Not long before his death, Mavinga had also called for an investigation, saying the attack undermined the rule of law.

Meanwhile President Mnangagwa told the UK to stop interfering in Zimbabwe’s domestic affairs. He claimed that Zimbabwe has the most democratic constitution in the SADC region (See: https://www.newzimbabwe.com/hands-off-my-zimbabwe-ed-tells-uk/).