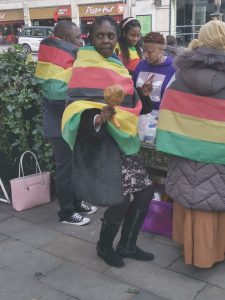 Better the economy dies than our people do declared President Mnangagwa the other day: you can revive the economy but can’t bring back a dead person. He was speaking at State House while accepting donations for the fight against the coronavirus (see: https://www.chronicle.co.zw/better-the-economy-dies-than-our-people-president-mnangagwa/).

Mnangagwa later went on to extend the lockdown and announce a massive US $720 million stimulus for the economy (see: https://www.reuters.com/article/us-health-coronavirus-zimbabwe-idUSKBN22D5SJ).

But where is the money coming from? The Vigil’s guess is that it will come as usual from bleeding the people through massive inflation. Finance Minister Mthuli Ncube is earlier reported to have warned that if Zimbabwe didn’t get a big bailout it would again have to resort to printing money.

The respected London-based magazine Africa Confidential said Ncube had written to the international financial institutions based in Washington appealing for money to save the country from disaster.

The magazine says it has seen a copy of the letter, which warned that the situation in Zimbabwe is so bad that it could cause an implosion of the state and threaten security in neighbouring countries.

It quoted Ncube as acknowledging ‘recent policy missteps’ which had seen inflation soar to over 500%. He said that without help the government would have to revert to printing money, risking a return to hyper-inflation and the crash of the Zimbabwe dollar.

In the letter Ncube asks for the rescheduling or cancellation of Zimbabwe’s foreign debt arrears and US $ 200 million to fight the coronavirus. He promises in return to introduce a market-determined exchange rate and end the Reserve Bank’s ‘quasi fiscal operations’.

Africa Confidential observes: ‘this according to finance officials in Washington is code for saying conditions are so horrendous that Ncube has been given the political cover to promise a crackdown on grand corruption at the heart of government’.

The magazine says that neither the World Bank not the International Monetary Fund have responded officially to Ncube’s letter, nor do they intend to do so despite him following up with phone calls. An official is quoted as saying: ‘Zimbabwe is a political, not an economic policy crisis and . . . Without credible change on that level nothing else will move’.

The magazine sums it up: ‘Senior finance officials in Washington say that grand corruption and state violence have to go before they resume economic co-operation with Zimbabwe (see: https://www.africa-confidential.com/article/id/12945/Government_close_to_collapse_as_it_sends_plea_for_cash).

So dust off your old trillion dollar notes!