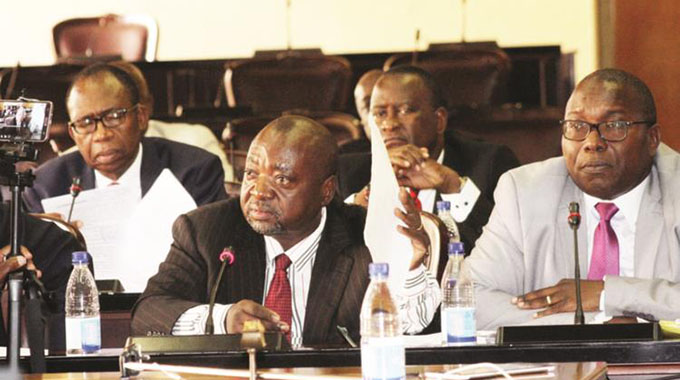 Farirai Machivenyika Senior Reporter
The decision by the Ministry of Mines and Mining Development to cancel Anjin’s diamond mining licence at Chiadzwa was illegal because it contravened the special grant they were given to mine the mineral.

Secretary for Defence Mr Martin Rushwaya said this when he appeared before the Parliamentary Portfolio Committee on Mines and Energy yesterday.

Anjin is a joint venture company between the Ministry of Defence and Anhui Foreign Economic Construction.

Mr Rushwaya said the decision to embark on business ventures was taken to bridge the gap as a result of Treasury’s failure to fund its budget.

“We then sought the legal requirements after having been given the leeway to proceed by the former President and we got a special grant from the ministry (Mines and Mining Development) allowing us to operate, as a result we subsequently were involved in the operations in the mining area,” he said.

He said Anjin was instrumental in acquiring the Kimberley Process Certification Scheme certificate which enabled other miners to export their diamonds.

“We were then surprised when we were told to abruptly stop mining operations and the takeover that happened on the 22nd of February in 2016.

“They were alleging that the grant had expired, but if you look at clause 8 of the grant it states that ‘the holder shall mine in this special grant as long as is feasible provided inspection fees are paid as provided for in the Mines and Minerals Act’.

“We were paying inspection fees and to us the mine was still viable that is why we were surprised when we were told to stop because we thought we had the legal basis.”

Mr Rushwaya said clause 10 of the grant also gave them a right to be heard before such drastic action was taken, but that was not followed.

On the reported missing $15 billion, Mr Rushwaya said Zimbabwe had no capacity to produce diamonds of that value and queried how former President Mugabe arrived at such a figure.

“He might have been given that figure by some official somewhere,” he said.

“In order to justify consolidation (of mines at Chiadzwa) somebody mischievously gave that figure to the former President because there is no scientific evidence to prove that we have the capacity to produce those figures.”

Speaking before the same committee, Director-General of the Central Intelligence Organisation, Ambassador Isaac Moyo, said he was not privy to the contract the organisation signed with its Chinese partners to carry out diamond mining at Chiadzwa.

Another CIO director responsible for Economics, Mr Jimias Madzingira, professed ignorance on the shareholding structure of the joint venture company.

Committee chairperson Mr Temba Mliswa then directed the CIO to bring the whole board, including its partners in Sino-Zim, to clarify issues around their operations.