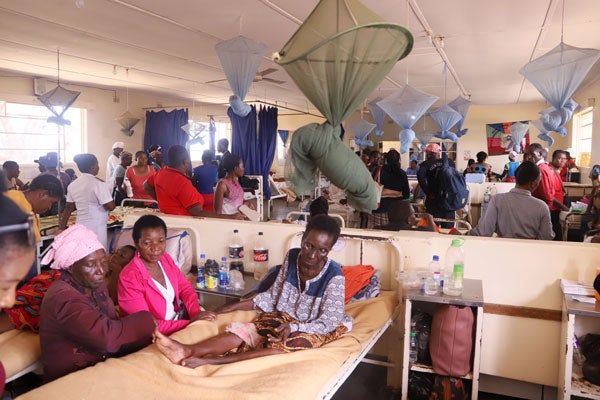 After travelling tens of kilometres from Harare to seek treatment at a mission hospital deep in Mashonaland Central, Moses Vhori has been in the queue for almost a month now.

Vhori from Gutu in Masvingo had been admitted at Parirenyatwa Hospital in Harare pending an operation to remove a steel implant inserted in his leg after he was injured in a scotchcart accident in Gutu. Unfortunately, doctors at public hospitals went on strike in September.

After waiting in vain for several weeks at Parirenyetwa, his wife Gladys Chidhakwa decided to take him to Karanda Mission Hospital in Mt Darwin. The couple arrived at the hospital on November 5, but Vhori is yet to be attended to by doctors because there are hundreds of patients that were booked before his arrival.

“We have been here since the fifth of this month and we were told that we will only be able to see a doctor on the 27th,” Chidhakwa said.

“The doctors were supposed to remove the steel rod, but that is when the strike began.

“We stayed at Parirenyatwa for a while, but there was nothing that they were giving him and he was discharged.”

Vhori said he was in great pain as the metal has taken longer than usual to be removed.

“It gives him a lot of pain,” Chidhakwa said.

“He cannot sleep comfortably because the rod sticks out through the knee forcing him to lie on his back most of the time.”

Chidhakwa and her husband are staying at a house, which is still under construction, at Karanda growth point while awaiting admission at the hospital.

“We could not go back home because it would have been impossible for us to put together another round of bus fare and besides, it will be impossible to travel considering his condition,” Chidhakwa said.

“We were given a prescription, but we can no longer afford, so he has had to endure the pain.”

Vhori, however, takes pain killers to ease the pain.

The couple is among hundreds of Zimbabweans that travel from many parts of the country to seek treatment at Karanda Hospital, which is among a few hospitals in the country that are fully operational following the strike by government doctors.

The strike has paralysed operations at most public hospitals and human rights groups say dozens are dying at their homes due to lack of treatment.

Karanda, a 150-bed hospital built by the Evangelical Church of Zimbabwe in 1961, has become the last hope for thousands of Zimbabweans that cannot access treatment at public hospitals and it is already overwhelmed.

According to the hospital’s website, Karanda performs over 4 000 surgical cases annually.

“The patient population is drawn from the entire country as people seek affordable, reliable and companionate healthcare,” the hospital says on the website.

A visit to Karanda, however, showed that the situation is getting out of hand with hundreds of patients being forced to wait for weeks to receive treatment due to the large number of patients that are trekking to the health institution.

Some desperate patients are sleeping on the verandas of shops at the nearby growth point while waiting for their turn to be seen by doctors.

Chidhakwa and other women do odd chores like ferrying water, firewood and serving customers as the growth point has become a hive of activity.

She said the owner of the house offered them free accommodation and they repay him by fetching water and firewood.

“It is the least we can do for someone who has been so helpful. The owner is God-sent,” Chidhakwa said, adding that she was now homesick.

“I miss the younger ones more. “One is in Grade 5 and the other one in Grade three. It breaks my heart as a mother that I just left them.”

She appealed to the government to resolve its dispute with doctors for the sake of patients.

“If the government is listening they should make efforts for doctors to come back to work because here at Karanda the entire country is coming here,” Chidhakwa added.

“We are struggling. Does the government want to rule over graves or people? They should feel pity for us.”

A few metres from Chidhakwa and Vhori’s new found home in Karanda was Rachel Jocho (41) from Gokwe, who broke her leg after she was hit by a car in Harare.

She was initially admitted at Harare Hospital, but ended up travelling to Karanda because there were no doctors to treat her. At Karanda her turn to see a doctor will only come this Thursday.

Jocho had no money to travel back to Harare and decided to camp at the growth point, while awaiting her turn.

“The service at the hospital is very good, but there are just too many people coming here and that is why many have to wait for more than three weeks to be attended to,” she said.

“Look at how much money we are spending travelling long journeys to get help.

“It is not right because the long trips are too painful if one is sick.

“That bumpy dust road to the hospital is rough on patients.”

The patients were full of praises for Canadian-born doctor Paul Thistle, who has become a household name in Karanda.

“One day it was about to rain and we were just sitting by the gate bracing ourselves for the downpour,” said a man who was accompanying his wife to the hospital.

“Thistle came and invited everyone to come inside and go into the church until the storm was over.”

Inside the hospital, a number of patients could be seen sleeping in corridors as they waited for their turn to consult a doctor.

A hernia patient from Nyamapanda, Biggie Mudzimu, said he had been queuing for treatment since Sunday last week.

“I am here waiting patiently to be treated by one of these doctors. “I came from Nyamapanda last Sunday,” said Mudzimu.

“I have no choice, but to wait here until l get treated. Thank God they have rooms here. They have about 20 waiting rooms for patients, which are all fully booked.”

Hope Manyeruke from Nembudziya in Gokwe North said she brought her daughter, who needs an operation for tumour on her back.

“I came all the way from Gokwe Nembudziya after I heard about the excellent work being done here,” she said.

“I have been here for more than a week now, but I am very optimistic that when I leave this place my child will be well again.”

A hospital official, who spoke on condition of anonymity said the institution was now overwhelmed by the number of patients.

“We are just a small hospital with 150 beds and four doctors, two locals and two from abroad.“The patients that are coming here are now too many,” he said.

“We have since told our security to control cars here that is why you saw some cars being turned away. The pressure is now too much.

“Since we are a non- profit making hospital, under developed and meant for this malaria catchment area in Mount Darwin, people are now taking advantage of our services

“Our main goal is to save lives, so we go for many hours clearing the numbers and we usually skip our tea and lunch. There is no time to rest here but we enjoy it because we are saving our people.”

The patients fear that with the onset of rain seasons travelling to Karanda will become a nightmare due to the poor road network.