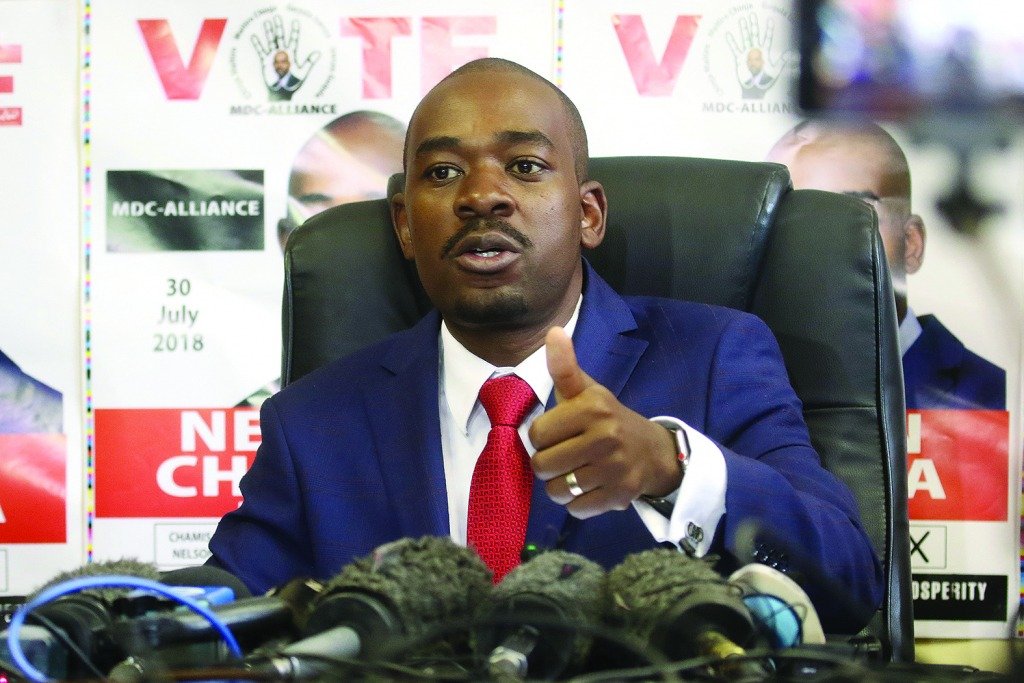 MDC Alliance leader Nelson Chamisa yesterday said President Emmerson Mnangagwa was doomed and will not be able to resolve the country’s worsening economic meltdown because his government suffers a serious legitimacy crisis.

The opposition leader, who still insists that Mnangagwa rigged the July 30 polls, said until the legitimacy crisis stalking the Zanu PF administration was resolved, the economic crisis would continue on a downward spiral.

Chamisa said had he been declared winner, confidence would have increased with Zimbabweans living in the Diaspora already trooping back home.

“There would be an economic hara-kiri right now if there was no political rape on July 30. Rape has consequences and this failing economy is what we are now suffering from,” he said.

“But as both a leader and citizen, I am deeply concerned by the level of suffering of Zimbabweans. There is violence in the minds of people due to the painful challenges they are facing everyday under Mnangagwa’s controversial leadership. The situation tells a lot about the previous elections. The elections, instead of being a source of joy, have brought about a lot of uncertainties.

“The economy is freezing and even fuel is in short supply. What is more in short supply is market confidence. Business is not settled because elections were tampered with. You can change statistics of elections, but you cannot tamper with figures in economics.”

“Mnangagwa did not win the elections, but he was declared winner. This has to be resolved first,” Chamisa told NewsDay in an exclusive interview.

“This problem will not go away because we inaugurated a lie. There is dispute on who should lead the country. Disputed mandates will always cause a dispute of failed economy.”
Chamisa’s remarks came after the country experienced a wave of price hikes of basic commodities since the elections, with foreign currency shortages worsening and some critical commodities such as cement disappearing from shops. Many companies were also scaling down operations and giving notice to retrench.

Mnangagwa was last month confirmed winner of the presidential polls by the Constitutional Court after Chamisa challenged the poll outcome as announced by the Zimbabwe Electoral Commission.

However, the opposition leader rubbished the court ruling, insisting he won the presidential race against the Zanu PF leader.

Chamisa insisted there were no talks between him and Mnangagwa to form an inclusive government, saying instead the Zanu PF leader should be grateful to him for cooling down tempers and restraining his supporters to avoid an implosion following the July 30 disputed polls. Chamisa said the country was facing a serious deficit of leadership and unless Zimbabweans’ votes and voices were respected, the situation was going to get worse.

“How do we move forward when we don’t respect what people have voted for?” he quipped. “Mnangagwa should actually thank me. I calmed down the people, but there is a limit to that goodwill. People are becoming impatient because they know that they voted and they were cheated on. It’s a political tinderbox. Why do you [Mnangagwa] want to lead people by fear and force?”

But Zanu PF dismissed Chamisa’s claims, saying there was no legitimacy crisis in the country because Mnangagwa was declared winner by the court.

“I don’t waste my time dwelling on what has already passed. President Mnangagwa was declared winner by the court and we are now focussing on the 2023 elections and we will trounce them again,” Zanu PF secretary for legal affairs Munyaradzi Paul Mangwana said, adding his party would address the economic challenges.

Soldiers on August 1 killed seven people when they opened fire in the crowded streets in a bid to quell post-election protests. Mnangagwa last week appointed a seven-member commission to probe the shootings, although analysts have dismissed its composition and terms of reference as a mere international public relations stunt.

Chamisa dismissed claims that he had been engaged by the European Union and the British government to goad him into a coalition government with Mnangagwa. “For the record, no one has approached me with an indication of progressive engagement on nation building. Not that I want, but to move the country forward there should be genuine engagement, not about power, but people,” Chamisa said.

“I engaged the various embassies on behalf of the MDC Alliance and to discuss what we think are the issues going forward. As you know, we have been given a window period to consult our people and we are alive to the fact that the people are determined to resolve their own issues.”

Chamisa said there was need for fundamental reforms in politics, judiciary, and economy and electoral fields to deal with the scourge of repeated electoral disputes which have the potential of plunging the country into permanent instability.

Key institutions, Chamisa said, should be reformed to arrest the polarisation that is affecting the country. He also underscored the need for proper and inclusive international re-engagement to unlock funding from multilateral institutions.

Meanwhile, Chamisa’s deputy Elias Mudzuri yesterday called for tolerance between his party and Zanu PF to allow each other space to perform, failure of which the country would be doomed.

Mudzuri also said Mnangagwa has to deal decisively with issues of human rights violations that have dogged the country in the past, causing investor flight and instability that has worsened the Zimbabwean situation.

He said Zanu PF will be controlling the central government while on the other hand the opposition controls most of the local authorities, hence the need to create an atmosphere that allows people to carry out their constitutional mandates.

“There is not much on working together or not because what has happened is that we are in control of the local authorities and the central government is under Zanu PF,” Mudzuri said.

“We need to tolerate each other. We don’t need a repeat of what happened in the past where our leadership in local authorities was always under attack. There must be some form of co-operation and not for the ministers to be out to frustrate the local authorities just to get loopholes to suspend.

“The bottom line is to make sure that the ordinary person on the street benefits, a common man is not a politician and doesn’t deserve all that.”