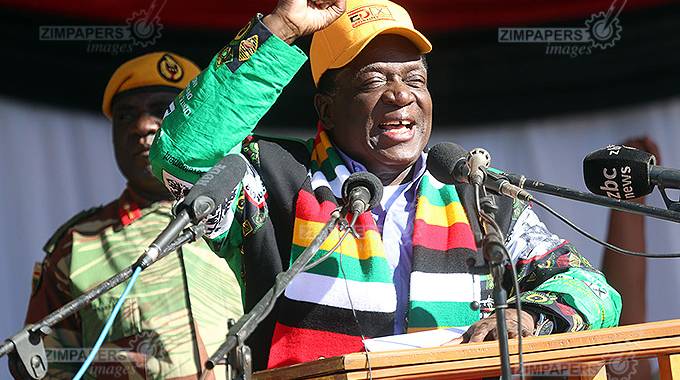 Farirai Machivenyika Senior Reporter
President Mnangagwa is expected to tour the Cotton Company of Zimbabwe depot at Gokwe Centre today as he pursues his economic recovery vision, and then to address Zanu-PF supporters as part of his election campaign trail. Zanu-PF Midlands provincial chairman Cde Daniel McKenzie Ncube told The Herald yesterday all was set for the two events.

“As we speak we are at the venue and also mobilising people to come in their thousands tomorrow.
“The President will tour the Cottco depot where management will make presentations on their operations including the challenges they face.

“Thereafter we expect the President to address the masses in Gokwe,” said Cde Ncube.
Gokwe is a cotton growing region with most households relying on the crop, commonly referred to as white gold”, for their sustenance while also earning the country precious foreign currency.

Government has already indicated that it will introduce Command Cotton which will be sold through an auction system to create competition in the pricing of the crop.

The crop also supports a number of downstream industries in both the Midlands and Mashonaland West provinces that employ thousands of people.

President Mnangagwa has emphasised that Government’s focus is on growing the economy.
He has toured a number of areas across the country where he has commissioned several new projects.
Last week he laid the foundation stone for the $1,5 billion Hwange Thermal Power Station expected to create employment for at least 3 000 people from the local community.

The President has also opened a number of companies in the past few months including the $40 million Willowton cooking oil refinery in Mutare, the $30 million Pepsi plant in Harare and the $12 million Davipel plant also located in the capital and is into manufacture of consumer goods.