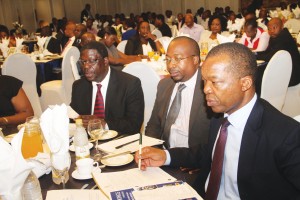 YESTERDAY, the Confederation of Zimbabwe Industries (CZI), in partnership with this newspaper, published the 2017 manufacturing sector survey.

Key among the published metrics is the manufacturing sector’s capacity utilisation data, which shows a decline to 45,1 percent from 47,4 percent last year.

The indicator has come off its post-dollarisation peak of 57,2 percent in 2011, tracking the slow-down in economic growth.

It is interesting that the decline comes at a time when government and the central bank are pushing measures to stimulate output.
As it turns out, output did rise by six percent, driven by firms with plants that are less than 10 years old.
This raises an important dimension; capacity utilisation paints an important picture, but it is not the whole picture.

Important considerations worth taking into account include the state of machinery in use and aggregate demand.
Household expenditure slumped 12 percent in 2016, reflecting weak aggregate demand in the economy.
It is clear that the economy has extra slack and, therefore, has capacity to absorb significant increases in output.
However, the question is, if with the diminishing demand and high levels of unemployment, that is an option at all.
More so, when one considers that currently Zimbabwe cannot leverage on its excess capacity to export.

As we recently reported, the edible oils industry, whose capacity now exceeds domestic demand, still cannot export into the region due to the high cost of exports and our strong adopted currency, the United States dollar.

So, while capacity utilisation is an important indicator, effective policy-making should go behind the mere metric and explore ways of enhancing the quality and competitiveness of the levels of production.
The collapse in manufacturing exports, from about $1 billion three years ago to $400 million currently, is reflected in the wide current account gap and foreign currency shortages the economy is grappling with.
This calls for targeted policies to arrest the decline and it is commendable that the CZI continues to provide empirical data to assist government in fashioning appropriate interventions.
CZI should also be applauded for embracing womenomics.

For the first time, the 2017 manufacturing survey incorporates a study on gender.
It is a no brainer that, because they make up the majority of the population, women have to be at the centre of economic activity at every level.

As such, current low levels of women in leadership, not just in industry, but across the economic sectors, are counter-productive.