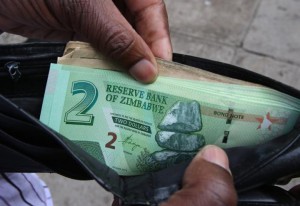 As at mid-morning yesterday, the US dollar to Bond note rate stood at 30 percent, while bank transfers to the greenback ranged between 55 percent to 60 percent.

AFTER a brief lull, Zimbabwe’s cash premiums have begun soaring again, with cash traders now charging as much as 60 percent premium on bank transfers to US dollar transactions.

While the authorities have gazetted a law to curb illegal cash and foreign currency trading — with offenders facing a mandatory 10-year jail term, forfeiture of cash and bank account closure ­— the underground black market has been thriving.

As at mid-morning yesterday, the US dollar to Bond note rate stood at 30 percent, while bank transfers to the greenback ranged between 55 percent to 60 percent.

The rates depend on the notes being sought, with high value notes such as crisp USD$100 notes attracting a higher premium

Mid-September, the rates surged as Zimbabweans got into panic mode, but came off early this month following various interventions by the authorities as well as the commencement of the drawing down of a US$600 million African Export Import Bank foreign payment facility.

The central bank says the AfreximBank facility will stabilise the foreign payments situation for up to 8 months, by which time the country will be receiving forex receipts from next year’s tobacco selling season.
Zimbabwe generates in excess of US$500 million annually from tobacco sales.

Retail industry officials say at least a quarter of their forex requirements are met by the black market. Local business owners who spoke to The Financial Gazette said various ways of getting cash and transferring it outside the country had been devised as the country’s foreign exchange shortages escalate.

“Rates are now going up to as high as 60 percent. What local companies have been doing is they are now getting someone outside the country to pay suppliers directly from there then they settle whatever local expense they have locally plus 60 percent on top.

“Most businesses that have links outside the country have resorted to this while others are now taking money to South Africa and Zambia then process telegraphic transfers from there to suppliers.

“In the past, banks used to give priority to cash customers but this has not been the case, indicating a plummeting confidence in the banking sector, local businesses are now taking their cash elsewhere to process transactions,” a local business owner, who spoke on the condition of anonymity, said.

Another method is companies are now purchasing the South African Rand on the local parallel market to deposit into offshore accounts then have Diasporans re-send the money into Zimbabwe via Western Union or MoneyGram for them to collect in US dollars.

This method is no different to the practise that forced mobile money platform, EcoCash, to slash its international MasterCard withdrawal limits and subsequently halting the card’s usage outside the country.
While cash traders have admittedly disappeared from the country’s streets, “big fish traders” are said to be working with local bankers to access foreign exchange as local companies now take their cash to neighbouring countries to pay foreign suppliers from there.

A “big fish” trader who spoke to The Financial Gazette — anonymously because cash trading is now illegal — said his account was processing amounts above US$500 000 monthly.

“Of course I have different accounts with various banks and in a good month I process transfers worth over $500 000 since July. I have a few teller friends who help me with the process and facilitate for a little something.
“Government cannot completely ban us; we have phones and conduct business from the comfort of our homes. Clients are desperate and they come to us. I really don’t deal with small individual clients,” the cash dealer said.
This comes as local banks have run out of bank notes, forcing people to spend hours at financial institutions queuing for money.

While the Reserve Bank of Zimbabwe (RBZ) governor John Mangudya has accused bankers of abuse and said their move to channel cash to illegal black market dealers was “a sign of the ugly face of indiscipline”, Zimbabwe is yet to clamp down on bankers fuelling cash trade.

Bankers Association of Zimbabwe president Charity Jinya is on record saying the sector was against “illegal or unethical practices by both clients and members of staff within banking institutions” and urged people to report bank officials engaged in the currency black market via RBZ hotline numbers.

The central bank also has dedicated hotline numbers —TelOne — 08006009 and Econet — 08086770 — for the public to report individuals and firms or traders that may be involved in cash hoarding, selling or abusing or externalising of cash, or any related misdemeanour, however this has not stopped cash barons.

A cash reward equivalent to five percent of the reported and recovered cash amount will be offered by the central bank has also failed to motivate cash-hungry Zimbabweans to report those buying and selling cash.
Confederation of Zimbabwe Retailers president Denford Mutashu said the situation indicated bankers were not interested in acting on the situation.

“It’s easy for banks to monitor if they are willing through the Know Your Customer (KYC) to trace transactions that are suspicious.Their silence or inaction speaks volumes. Most suppliers have increased prices and reduced payment terms from 30days to 7 days and they allege that they cannot access foreign currency via banks,” Mutashu said.
Market watchers have blamed the central bank for failing to tighten the screws on bankers with financial research firm Equity Axis alleging banks have been instrumental in fuelling the crisis through funding parallel market dealers and similar activities.