EDITORIAL COMMENT: Let’s rebuild our nation as one people 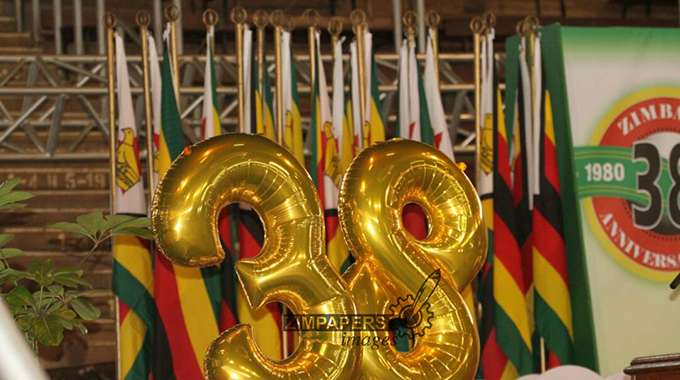 Source: EDITORIAL COMMENT: Let’s rebuild our nation as one people | The Herald April 18, 2018

TODAY, the nation commemorates 38 years of independence. This year’s celebrations are unique in every aspect. As aptly captured by President Mnangagwa on Monday, today’s celebrations “carry even greater resonance”.  The celebrations come six months after Operation Restore Legacy, which ushered in a new administration led by President Mnangagwa. The coming in of the new administration marked a change of culture from the past and embracing a new socio-political and economic mindset in everything we do as a nation.

For its part, Government has opened the country for investment and is engaging with all countries of the world through President Mnangagwa’s “Zimbabwe is open for business” investment pitch.

The new administration is walking the talk on clearing perceived and existing impediments to foreign direct investment. It has also shown its eagerness to learn and the recent visit to Zimbabwe by Rwandan governance expert Ms Clare Akamanzi is a case in point.

Under President Mnangagwa’s leadership, Zimbabwe is building bridges at regional level and beyond. At regional level our relations with Botswana, which under the previous administration had been reduced to cross-border insults, have been mended. Overseas, re-engagement efforts are underway with the United States, Britain, the European Union and other Commonwealth members.

Government is also strengthening existing relations with all-weather friends such as China and Russia to ensure they bring economic benefits for the nation. Earlier this month, President Mnangagwa was in China for a fruitful State visit at the invitation of his counterpart President Xi Jinping and last month Russian Foreign Minister Mr Sergey Lavrov was in Harare to bolster economic and political co-operation.

Two United States senators, Messrs Jeff Flake and Chris Coons — who were involved in the drafting of a recently proposed amendment to the Zimbabwe Democracy and Economic Recovery Act (ZDERA) — were also in the country early this month for engagement.

For the first time in a long time opposition political parties have been campaigning in villages and hitherto no go areas. The opposition has been everywhere campaigning for votes and the electoral field has never been this level.

Government has also declared war on corruption and those caught with their hands in the till have been arraigned before the courts to answer to the charges.

The Zimbabwe of yesterday is dead. A new nation has been born. As we commemorate our independence, let us cheer these achievements too. It is time we, as Zimbabweans, played ball by complementing Government efforts at reviving our economy, fighting corruption and national unity.

Reporting the corrupt, putting maximum effort on our work and loving one another even in the face of an election are never an overarching task. We are Zimbabweans first and foremost and nothing living or dead must separate us. The only homage we can pay to the departed and living liberation heroes is loving each other and working for our nation day and night to ensure it stands out among the best in the league of nations. In that vein, it is unpatriotic for any political party to seek the throne by evil means. It is everything unpatriotic to soil the motherland for the love of power. Speaking evil about our motherland for the sake of the ballot chases away investors and leaves our youths in the streets, unemployed.

Battering the image of our motherland for a few coins of silver equally destroys current efforts by Government to rebrand our nation as a stable investment destination.

It is time we prove our “Zimbabweanness” by what comes out of our mouths at rallies and international gatherings. We are from the same womb and the time to build our nation is now.

It is far easier to destroy a nation than to build it. As we mark 38 years independence today, let us prove our oneness by building together our beloved nation for ourselves and posterity.