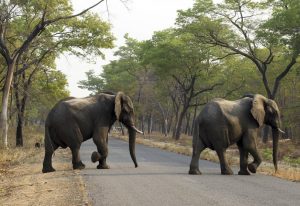 U.S. Magistrate Judge Scott Varholak sentenced Paul Ross Jackson to pay a maximum fine of $25,000, according to a news release by U.S. Attorney Bob Troyer  and Special Agent in Charge Steve Oberholtzer of the U.S. Fish and Wildlife Service.

“When American hunters violate the laws of foreign countries in the unethical pursuit of trophies, they don’t just undermine the conservation efforts that make hunting possible. They break the law,” Troyer said in a news release.

In the spring of 2015, Jackson shot and killed the elephant in violation of Zimbabwe’s Parks and Wild Life Act. He was working with a South Africa based professional hunter, a New-York based export facilitator, and several Zimbabwe-based hunting businesses.

The government of Zimbabwe initially blocked the Jackson’s effort to export the elephant to South Africa because Jackson was from Colorado. The defendant then worked with others to get false South African identification for him, the news release says.

“The U.S. Fish and Wildlife Service is committed to protecting imperiled species around the globe from poaching and trafficking,” Oberholzer said.