Fadzai Muchemwa, curator of the 2022 Zimbabwe Pavilion at the Venice Biennale writes about four up and coming Zimbabwean artists featured in Africa Present on Artnet Auctions.

At the upcoming 59th Venice Biennale in 2022, Zimbabwe will be represented by four exceptional artists whose innovative works interrogate the ambiguities between reality and fantasy. These four artists—Ronald Muchatuta, Wallen Mapondera, Kresiah Mukwazhi, and Terrence Musekiwa— create evocative works that are politically charged, pushing back against the use of brute force and grabs of power plaguing their nation. Right now, works by all four artists are being offered now in the “MEET” section of Africa Present, live now on Artnet Auctions, and co-curated by Latitudes, a new online marketplace for contemporary art from Africa. Created in partnership with Serge Tiroche, this sale is live now through September 14.

The below five works move beyond the usual discourse of Zimbabwe, depicting the country as a space of encounters, resilience, and small acts of care, against the spectacle of human suffering. They attend to both the spectacular and the mundane experiences in the face of catastrophe and polarization. The convergence of this group of artists goes beyond protest art’s rigid, often formulaic confines. 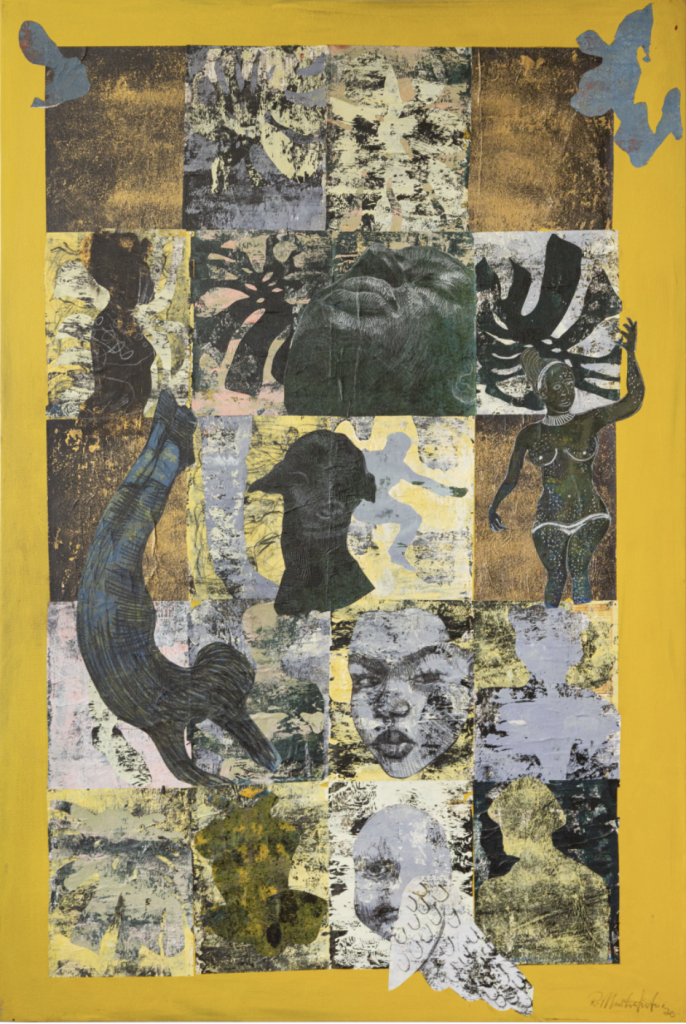 Her Bliss by Ronald Muchatuta is self-reflexive, satirical, and deliberately digressive. Inspired by the character Anta in Djibril Diop Mambéty’s 1973 film Touki Bouki, this work explores issues of migration and hardship. Her Bliss contains various visual elements that nod to Mambéty’s seminal work, including the pool, the goat, the charged energy, and, of course, Anta.

The warm, summery colors represent the attractive life that one envisions when coming from a place of darkness, a reminder of the social, political, cultural, and geographic contention that one associates with Zimbabwe. Yet, there are other layers to the messaging of the work. The reference to Touki Bouki is a tongue-in-cheek exploration of issues of seeing, desire and representation. Bouki is a clever and cunning Wolof and a popular character who causes mischief and cheats his way to what he wants. Much like the character Tsuro (the hare) in Shona folklore, the reference to Bouki speaks of the use of metaphor and imagery to hide in plain sight. 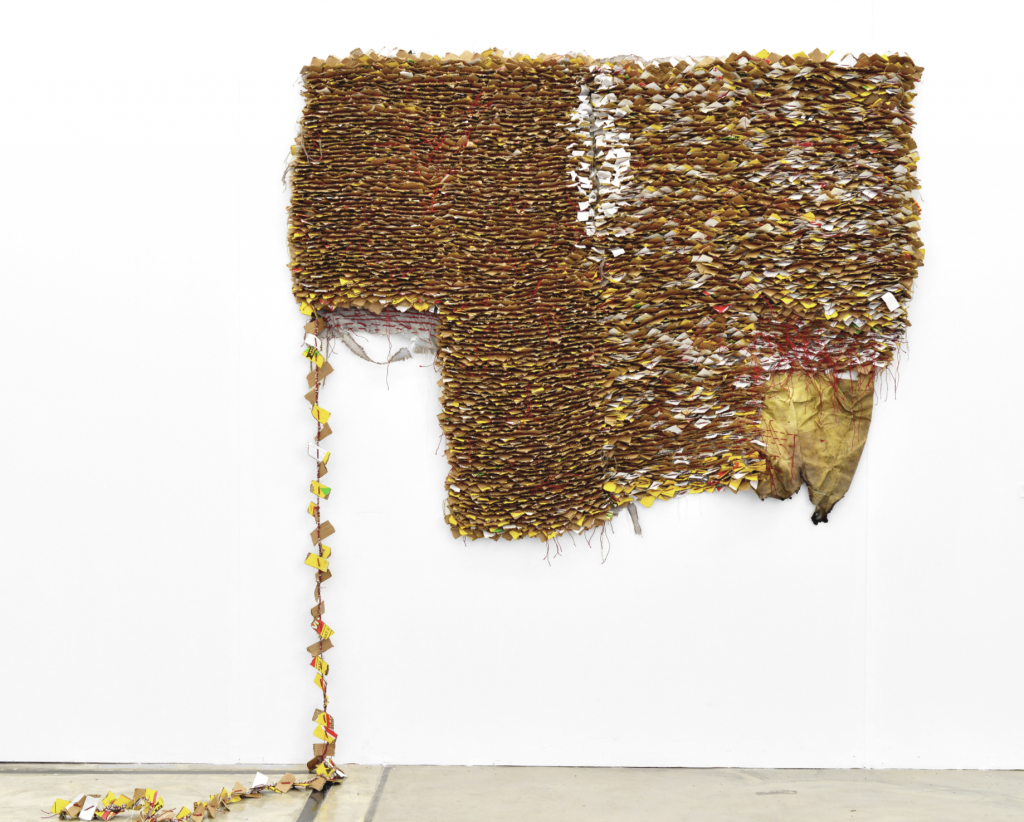 Kubvunura III, the title of Wallen Mapondera’s work, is a word with a lexical ambiguity that talks of unbundling, unraveling, and uncovering. “Kubvunura” is also a play on “Kubvondora,” a colloquial Shona word that means whistleblowing, an apt description of Mapondera’s practice of socio-political commentary.

The distinctive materials that Mapondera uses in this work, the pieces of cardboard and the sewing thread, speak directly to his practice and draw from the lives of the ordinary man at the mercy of unscrupulous politicians and forces of capital. Mapondera looks to cardboard packaging as a tool for survival and exploration. 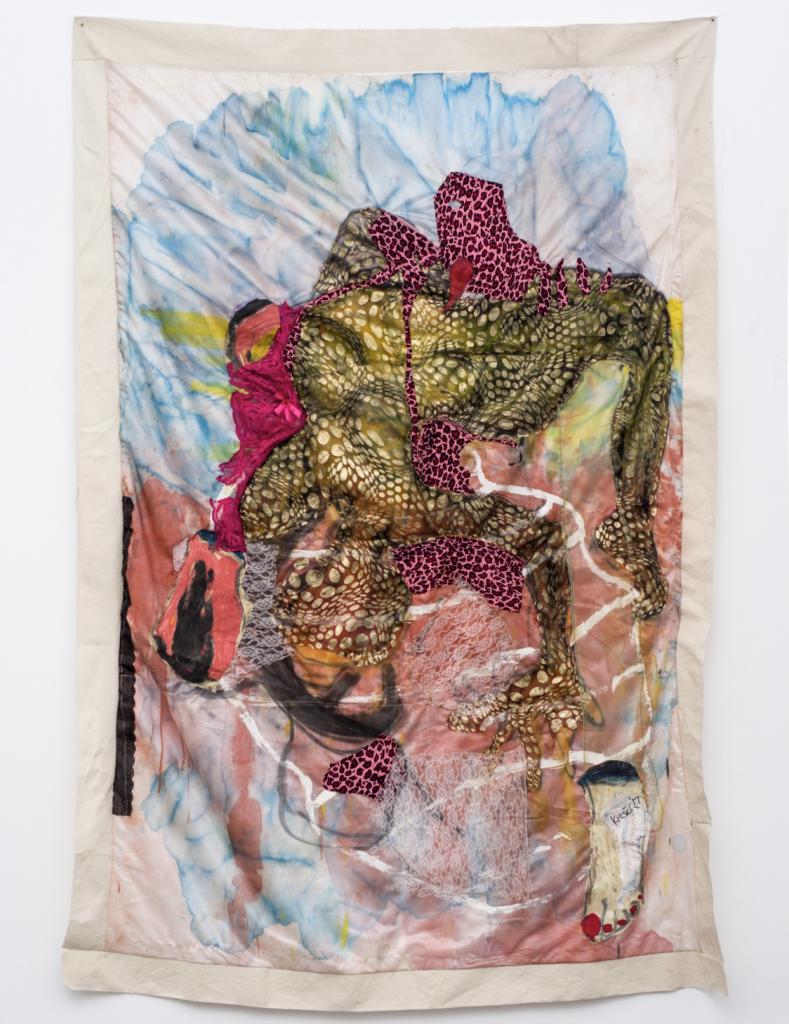 Kresiah Mukwazhi’s Unreachable Parts Painted Gold is a celebration of women who survive, at all costs, in a world of precarity. Her work delves into the underbelly of the sex work industry, chastising a society that continues to push sex workers into the shadows. Unreachable Parts necessitates and provokes active spectatorship and conversations about governing where the body is the territory being governed.

Mukwazhi represents or poses a threat to social order through her textile work. She complicates the dichotomy between what is seen and what is said. Bold choices and socio-political themes place marginalized protagonists in the center of her works, seeking to realize an elusive dream. 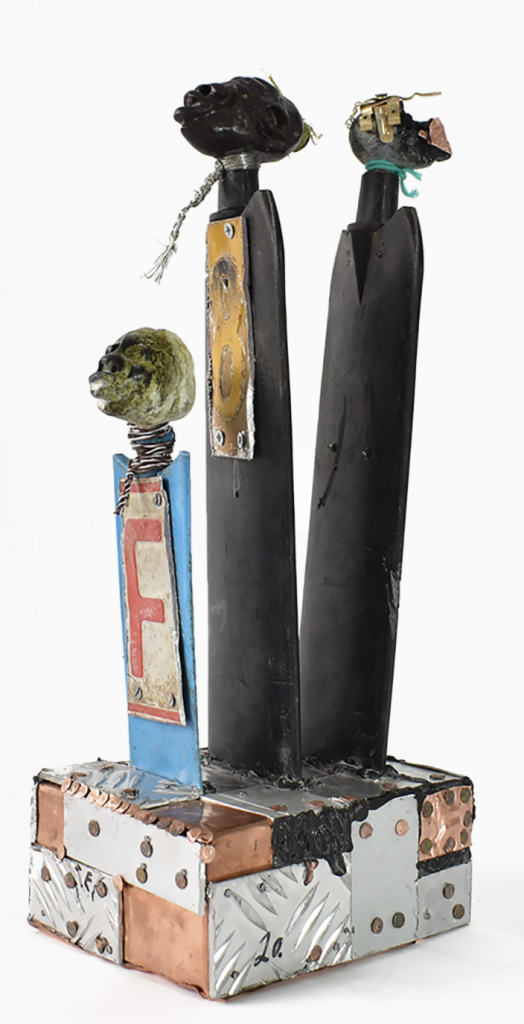 Terrence Musekiwa’s Kubuda Mudope 7 directly translates to Out of the mud. The word “dope” (mud) is an allusion to the predicaments and exigent circumstances that one must escape. Musekiwa utilizes scraps in his practice, fusing stone sculptures with other scrap materials, as a commentary on the fear and survival tactics that many utilize to adapt and to survive. 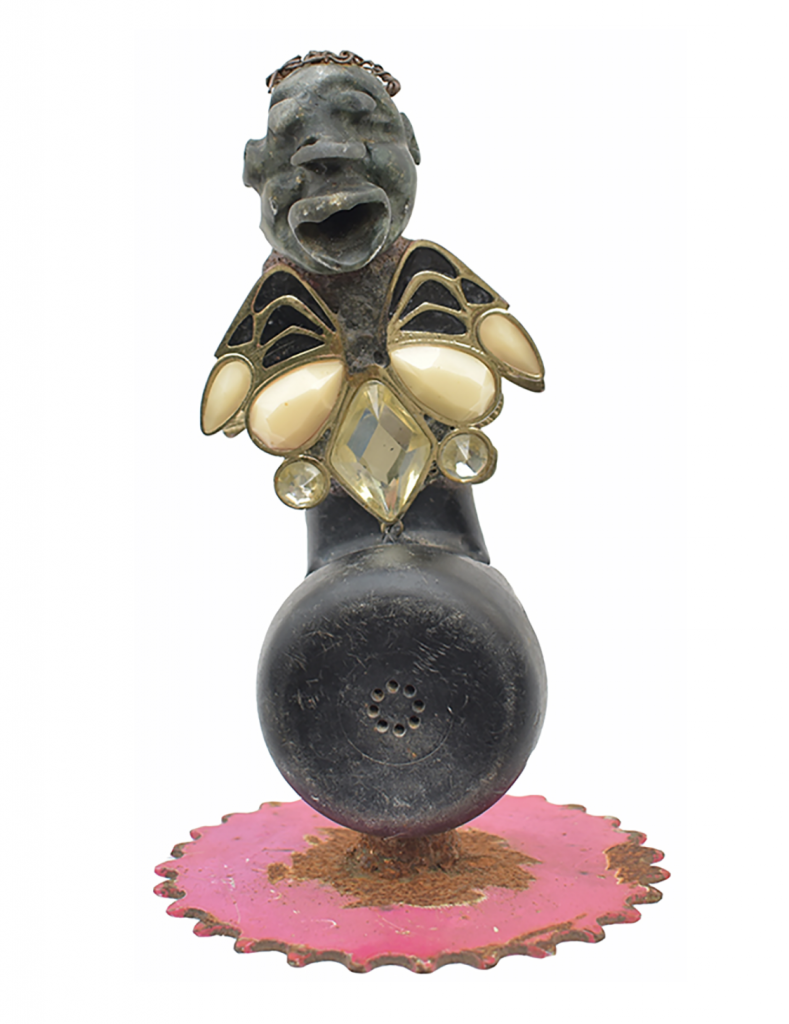 Much like Kubuda Mudope 7, Musekiwa’s piece Muimbi (Singer) is created from his signature technique of combining hand-carved stone with found and industrial objects. The artist’s visual language wrestles with convention to simultaneously challenge and pay homage to Zimbabwean tradition, creating a dialogue about the mechanics, politics, and the micro and macro trade systems of his home country.