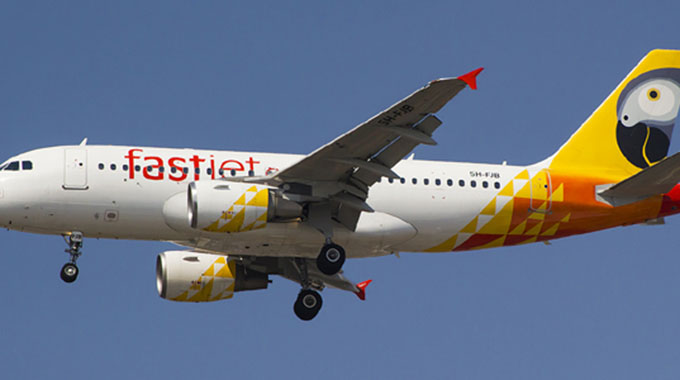 Africa Moyo Business Reporter
Low cost airliner, fastjet, is set to land at the Joshua Mqabuko Nkomo International Airport at about 9am today, on the aviation firm’s inaugural flight on the Harare-Bulawayo route.

This move is in sync with a Government decision to embark on the “managed liberalisation” of the air transport sector to promote destination connectivity for the benefit of travellers.

Only local airlines such as fastjet and FlyAfrica Zimbabwe have been allowed to ply local routes.

In the past, domestic routes were preserved for national airline, Air Zimbabwe.

fastjet has a special launch fare that begins from $59 including taxes.

The airline’s CEO Nico Bezuidenhout recently said they have been “pursuing this route designation for several years”.

Mr Bezuidenhout said they are now delighted to see that “positive changes” in the country’s political and economic environment has allowed fastjet to ply the route.

Mr Bezuidenhout says they have invested “substantially” in the market with positive outcomes.

fastjet is launching the route with a single frequency but there are plans to grow the route, and potentially introduce additional aircraft to facilitate growth.

Mr Bezuidenhout believes that fastjet’s entry into Bulawayo would further stimulate economic activity and growth in the second capital, which is a strategic economic hub that services nearby mining, industrial and agricultural activity.