Fight or surrender: The plight of the young in Zimbabwe

Source: Fight or surrender: The plight of the young in Zimbabwe 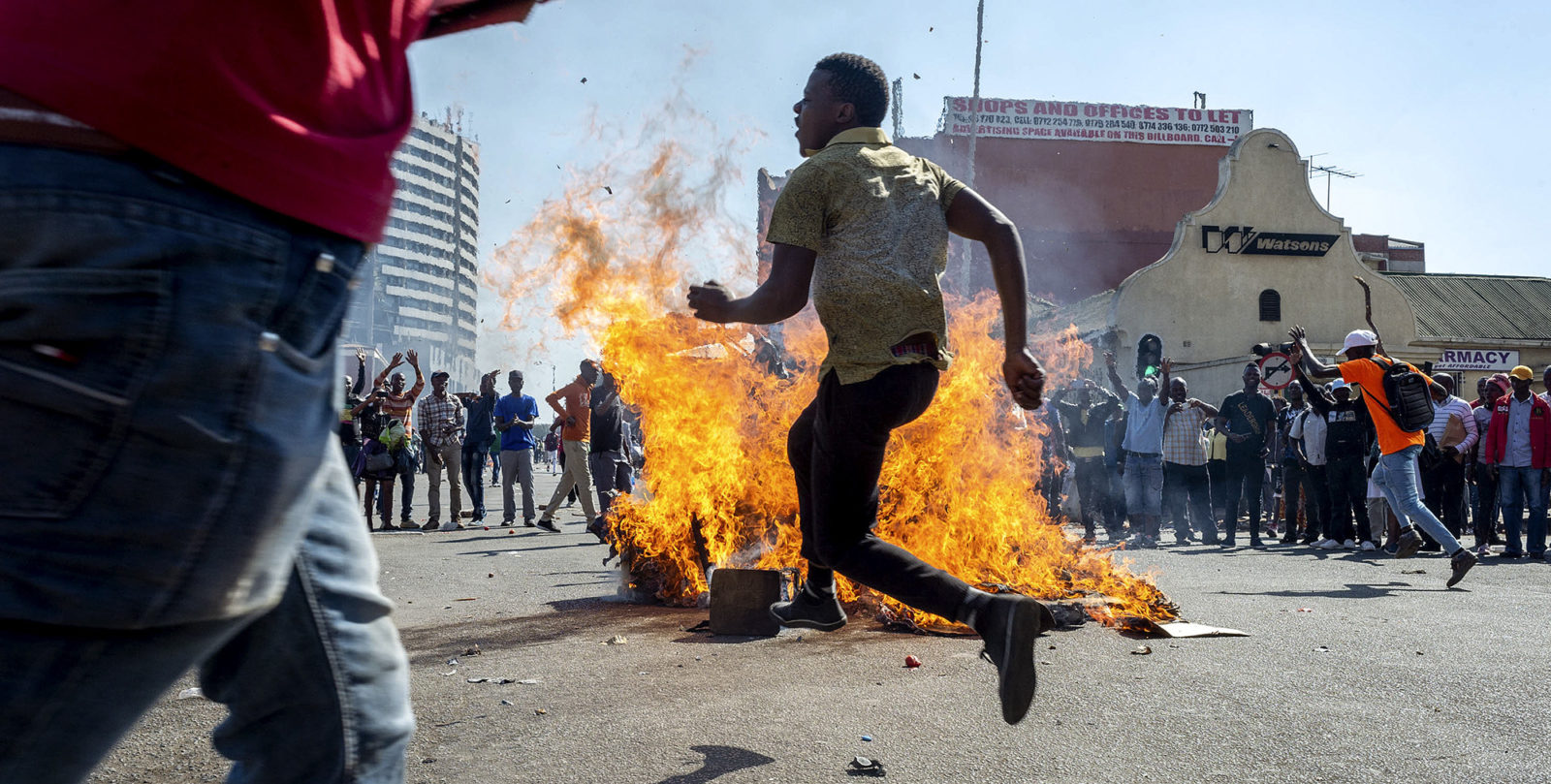 People gather around a fire on the street during a protest against polling results in Harare, Zimbabwe on 1 August 2018. The day saw protests turn violent when police fired rubber bullets and teargas before the army was called in and began firing live rounds. (Photo: EPA-EFE / Yeshiel Panchia)

As the Zimbabwean crisis deepens, many in the media and academic fraternity castigate their countrymen as docile, unable to resolve their perennial economic woes due to a reluctance to speak out against corruption and State Capture. Young people have been on the receiving end of these aspersions.

There is much truth to the claim that Zimbabwe’s judicial, legislative and executive branches are captured by corrupt cartels that milk the country’s resources for the benefit of the top 1%. However, the argument that young Zimbabweans are docile in their complicity breaks down when subjected to critical analysis. It fails to take account of the heavy yoke of unemployment, poverty, repression and other factors resulting from the malevolence of Emmerson Mnangagwa’s presidency.

Young people in Zimbabwe are not a homogenous entity.

Whereas a significant portion spend much of their time watching unproductive videos on social media, they co-exist with those who speak up about the deteriorating economy. Those who follow people like Fadzayi Mahere, Joana Mamombe, Ostallos Siziba, Nqobizitha Mlambo, Allan Moyo, Makomborero Haruzivishe, Treasure Basopo, Jacob Lawrence Sedze and Namatai Kwekweza know the great work that young Zimbabweans are doing. This not only conscientises people about the depth of our perennial crises, but organises them to rebuke the massive corruption that stifles growth.

It is time to stop castigating young people homogeneously. Instead, try to recognise and identify with the remarkable effort of those fighting for change. This would better organise the fight for a better Zimbabwe. It is time for older generations to be mentors, to share their wisdom with young activists and political newcomers. Instead of castigating young people for not knowing how to navigate the political terrain, why not help them learn?

It is also time to ask: Why are older people unwilling to help the young?

Although there are suppressive laws that hinder strong civic education, media freedom and free speech, mentoring is a big step everyone can take immediately to help combat critical obstacles to participation by young people. It is time to understand why some youngsters choose to distance themselves from politics and devise means and ways to conscientise them.

Since 2017, Zimbabwean politics has become increasingly dysfunctional. The radicalisation of Zanu-PF continues to entrench corruption, inefficiency and obstructionism in government and public service, leading to poorly designed macro-economic policies. Why would anyone coming of age aspire to work in this quagmire? It seems Mnangagwa learnt nothing and forgot everything from his malevolent predecessor, Robert Mugabe.

Participation in politics by young people is circumscribed by social media participation. Sublime as it is, online engagement or participation is never as effective as physical engagement. Mnangagwa’s government is ruling with an iron fist and has become more ruthless than Mugabe’s. Abductions, torture, wanton arrests and crackdowns on protesters, journalists and opposition leaders have become the order of the day.

Zimbabwean youngsters have therefore resorted to using their hard-earned data bundles to ardently follow socialites and comedians such as Passion Java, Mai Titi and Madam Boss on Facebook, Instagram, Twitter and YouTube rather than using them to speak up, conscientise and mobilise each other to confront their plight.

The impact of online activism on the streets

This is not to negate the substantial impact of online activism and political participation. Social media participation was key in the Arab Spring from 2010 to 2012. However, its organisation translated well from social media mobilisation to a series of physical anti-government protests, uprisings and armed rebellions.

This has surely not yet been the case with the Zimbabwean context, where the government clamps down internet activity whenever there is a serious, robust and well-organised online campaign.

The country made history as the first to shut down the internet, on 19 January 2019, fearing the potential political impact of social media mobilisation. The most important point is that social media activism alone is futile if not backed by physical engagement which is often disregarded by many because it is often followed by arrests, torture and abductions.

Another powerhouse for politicisation is the student movement in universities across the country — the famous ZICOSU and ZINASU which produced active national politicians including Nelson Chamisa and Authur Mutambara.

It has nevertheless been rendered useless by several factors. Student politics is supposed to be the training ground but upon finishing school some student leaders are becoming inactive as they grapple with economic woes such as unemployment and poverty.

Some lose focus and ideological standing due to the politics of the stomach. Those who are carefree about selling their soul are joining the regime they would not join in their sober, right mind. On the other hand, those marginalised young people, without a fancy education or job, rather succumb to substances such as drugs because of economic woes and the grim future of national politics. They feel they can do very little to turn the tide.

More than apathy, pessimism or disorientation, despondency plagues young Zimbabweans today. Overcoming that hopelessness requires showing empathy and making it clear that our crises are being shouldered by allies of all ages.

Also, we need to finally stop gaslighting young people with tales of previous generations’ tribulations and how they overcame them.

Before the advent of the internet and social media, in the 1950s and 60s youthful nationalist leaders like James Chikerema, George Nyandoro, Edson Sithole, Paul Mushonga and Thompson Gonese formed the City Youth League that challenged the racial discrimination of the settler government and the repressive land policies enshrined in the Land Husbandry Act of 1951. Although led by young people the movement appealed to the elderly, the workers and peasants of the surrounding areas.

From the late 1950s, the anti-colonial struggle underwent a more qualitative change in its goal, organisation and strategy.

But in fairness to these early protest movements, they enjoyed that homogenous collective support — public buy-in. Future nationalists built on the foundations of these movements could show the world that settlerism could not be removed by any method except militant and revolutionary nationalism.

However, today’s young people are caught between two extremes: if they do not speak against repression and corruption they are castigated as “docile”. If they do they are not supported by older generations, they are left alone to organise disoriented movements, only to be told in the local parlance “zvepolitics zvenyu izvi zvineropa, munofa murivana vadiki, siyanayi nazvo’’ (“politics is a game of death, you will die young, refrain from it”).

Given the rigid social fabric in Zimbabwe, no matter how hard they try to be well informed, young people end up confused. The lack of fruitful seminars, workshops and awareness, as well as the practicality of things, have restricted their creative minds and paused their career growth. Their choices and dreams must conform to social norms, so they end up switching careers. It is difficult for them to figure out what they want in life, what they aspire to. And more varied advice enhances their dilemma. Then, at an age when they should be confident, supporting their family and contributing towards the nation’s GDP, they doubt whether they made the right choices in life. DM/MC

Anotida Chikumbu is a historian and political economist. He is a PhD candidate and assistant lecturer in the Department of History at the University of Massachusetts Amherst. His broader research focus is on the “political economy of development in post-independent southern Africa”. Anotida also produces and hosts The Conversation with Anotida Chikumbu-Book TV, a books and articles review and academic dialoguing programme that offers insights and analysis on outstanding publications on the “political economy of development in Africa”. See a recent discussion with Mark Heywood here.

David Anodiwanashe Chikwaza is a researcher and scholar of political science and international development studies. He focuses on climate change adaptation, resilience building and transformation in Africa.