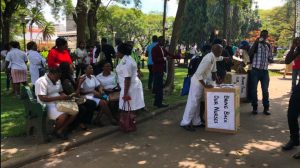 Nurses attending to the public at the Africa Unity Square in Harare, Zimbabwe’s capital Friday.

Harare, Zimbabwe (CNN)Fired Zimbabwean nurses offered a free clinic to the public in a demonstration outside the country’s parliament Friday.

“We are doing this to show that we are for the people,” Pretty Mugudza, a nurse based at Harare Central Hospital, told CNN after addressing members of the public who had gathered at Africa Unity Square adjacent to Zimbabwe’s parliament building.
“All we are asking for are better working conditions. We can’t be looking at patients dying in hospitals because we have no resources,” she said.
“We really want to work, but we have been barred from entering our work stations,” she added.
Around 16,000 nurses went on strike Monday to press home demands for improved allowances and irregular salary grading system, its union said.
The striking nurses were fired earlier in the week by Vice President Chiwenga who said they refused to go back to work after $17m was released to improve their pay.
The government said the decision to sack the striking nurses would not be reversed.
Health Minister David Parirenyatwa told CNN Thursday government has ordered heads of hospitals to recruit new nurses to replace those sacked.
“We aren’t going back on fired nurses. But they are free to apply if they still want to work,” he said.
Zimbabwe Nurses Association urged members to disregard the dismissals. The vice president had no power to sack them, the union said in statement Wednesday.
“For the record, our members have not received any letters terminating their services. They, therefore, remain employed by the Health Services Board,” the nurses union said.
Chiwenga, Zimbabwe’s former defense commander became Vice President December after he led the military pressure which forced Robert Mugabe’s resignation in November, ending the dictator’s 37-year grip on the southern African country.
Rights groups condemned the sacking and called it a “dangerous and irresponsible response” by the government which could endanger the lives of patients in the nation’s health facilities.
According to the Zimbabwe Association of Doctors for Human Rights (ZADHR) and Zimbabwe Lawyers for Human Rights (ZLHR), the directive lacks legal merit as it is in contravention of their constitutional rights.