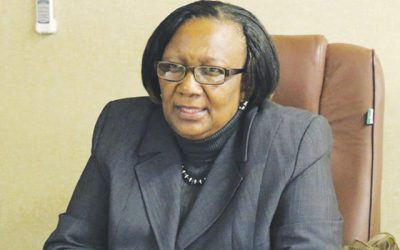 Mutsamwira claimed Mupfumira defied a court order compelling her to issue a show cause order in a labour dispute between her and her former employer, Stanbic Bank.

She filed the court application on October 13 this year, shortly after Mupfumira had been axed from Cabinet and replaced by President Robert Mugabe’s nephew Patrick Zhuwao.

Mutsamwira claims that on August 11 this year, the High Court ordered Mupfumira, under case number HC6108/17, to furnish her with reasons for the refusal of the show cause order within 20 days.

“The minister has, with impunity, wilfully impeded, obstructed and interfered with the course of justice and brought the administration of justice into contempt. The order aforesaid was duly served on the minister and came to her notice,” Mutsamwira said.
“The applicant accordingly moves a motion to compel by means of personal attachment and committal to prison, in order to secure the performance of the court’s order . . . without doubt the respondent’s disobedience to the court’s order affords reason for her committal for contempt. The minister’s conduct is a clear callous act, which affords no mercy to the poor workers who have now gone for years being denied them sources of livelihood.”

In the court papers, Mutsamwira said in February 2011, the bank and its workers engaged in collective bargaining at which time she led the meeting as the chairperson and was later victimised and subsequently fired in April 2015 for her role.

She, however, challenged her dismissal and won the matter in court.

After all her efforts to engage Stanbic Bank failed, Mutsamwira approached the court seeking an order to compel Mupfumira to issue a show cause order specifying the date, time and place at which Stanbic Bank was supposed to appear before the Labour Court to show cause why a disposal order should not be made.

The applicant said she also wanted the disposal order to be issued declaring the lock-out unlawful and ordering her reinstatement without loss of salary or benefits from the date of termination.