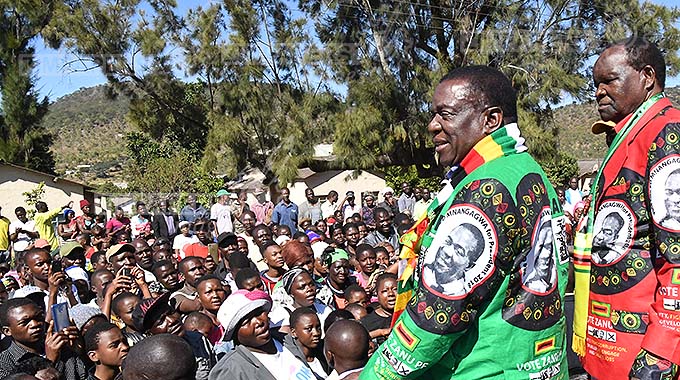 From George Maponga in MASHAVA
President Mnangagwa yesterday toured Mashava Asbestos Mine which he said will soon resume operations after Government poured $20 million for the firm’s revival. Mashava Mine, which was under Shabanie-Mashava Mines (SMM), ceased operations nearly a decade ago, under the weight of viability challenges, leaving thousands of workers jobless and the mining settlement on the verge of becoming a ghost town.

The President toured the mine where he was briefed by SMM management about progress in reviving asbestos mining at King Mine.

SMM management led by the firm’s chief executive Mr Chirandu Dhlembeu briefed the President about progress in de-watering the flooded mine shaft ahead of resumption of operations and also new equipment, including bigger pumps that were imported after Government injected funds into the firm.

Before touring the mine, President Mnangagwa told hundreds of Zanu-PF supporters who had thronged Mashava Pavillion to welcome him that the asbestos mine was set to resume operations soon.

‘’We have come to see progress at the mine (Mashava Mine) which will soon re-open after we secured some funds to revive it,’’ said President Mnangagwa to the cheering crowd.

In his address to thousands of people at Mucheke Stadium B arena, President Mnangagwa told the crowd about the impending re-opening of Mashava Mine after recapitalisation by Government.

‘’Mashava Mine will be re-opening soon after we sat down as Government and availed $20 million for recapitalisation out of the $35 million that is required to reach full production capacity and right now de-watering of the mine shaft at King Mine is underway and we expect production to start soon,’’ he said.

‘’During my tour of the mine (Mashava) I was shown new pumps and other equipment that have been procured after we injected funding towards revival of the mine. We are also working flat out to make sure Shabanie Mine is fully functional and we also injected funds that were required to revive operations and the two mines (Shabanie and Mashava) should be up and running soon.’’

President Mnangagwa said the two firms had potential to create 6 000 direct jobs where operating at full capacities with thousands more expected to benefit from downstream industries.

He said the new administration was more focused on fixing the country’s economy saying the ongoing drive to re-open closed firms was an indication of a new narrative by his Government.

Speaking to the media on the sidelines of President Mnangagwa’s tour, Mr Nhembeu said Mashava Mine was expected to resume production by year-end.

He said projected asbestos was anticipated to hover around 40 000 tonnes before shooting up to the full capacity of 75 000 tonnes upon injection of more capital.

‘’We have so far started re-employing some of the workers we had laid off and our staff complement now stands at 400 and we employ more as production increase until we reach a workforce of 1 400 which is the maximum.

‘’The $20 million that we got will see us producing 40 000 tonnes of asbestos and we will reach the full capacity of 75 000 tonnes per annum if we get the additional $15 million capital. At the moment
workers are de-watering the mine shaft and doing fabrication,’’ said Mr Dhlembeu.

Mashava Mine manager Mr Graciano Mapfumo said they had acquired a bigger pump that will pump out 180 cubic metres of water per hour, a development he said will speed up the de-watering process to pave way for resumption of operations.