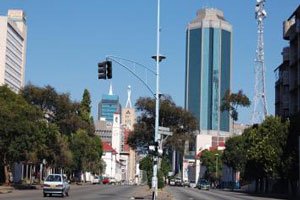 GOVERNMENT has been surviving by raiding the Reserve Bank of Zimbabwe (RBZ) to finance its ever-widening budget deficit with Finance minister Mthuli Ncube revealing this week, in a rare show of transparency by the authorities, that US$1,4 billion had been drawn illegally from the central bank by the end of August.

The Reserve Bank Act (Chapter 22:15) restricts government borrowing to not more than 20% of the previous year’s revenue collections.

Going by last year’s figures (US$3,814 billion) government’s overdraft at US$2,3 billion is more than three times above the statutory limit (US$762,8 million).

The country has been on an unbridled spending spree, financing populist policies to appeal to voters and appease top government officials.

Government spends upwards of 90% of its revenue to pay wages for a bloated civil service.

According to a recent Treasury report, the government budget deficit amounted to US$1,3 billion in the first half of the year.

Outlining fiscal interventions accompanying the Monetary Policy Statement presentation by Reserve Bank of Zimbabwe (RBZ) governor John Mangudya this week, Ncube said he would curb use of the overdraft facility.
“Consequently, government will effectively limit the use of the RBZ overdraft facility and curtail RBZ advances to government in line with Section 11 (1) of the Reserve Bank of Zimbabwe Act (Chapter 22:15), which states that borrowing from the Reserve Bank shall not exceed 20% of the previous year’s Government revenues at any point,” Ncube said.

Domestic debt rose by more than 34 times from US$275,8 million in 2012 to the current levels of US$9,5 billion, an indication of the alarming levels of fiscal indiscipline in government.

“Similarly, the high deficit has ignited expansion of domestic debt from US$275,8 million in 2012 to current levels of US$9,5 billion against US$7,4 billion external debt. This brings total public debt to US$16,9 billion,” Ncube said.

The government has also been relying on the issuance of Treasury Bills to borrow on the domestic market, contributing to the country’s ballooning domestic debt.

Newer Post
The state of the Right to Peace in Zimbabwe
Older Post
Will this govt break with the dark past?