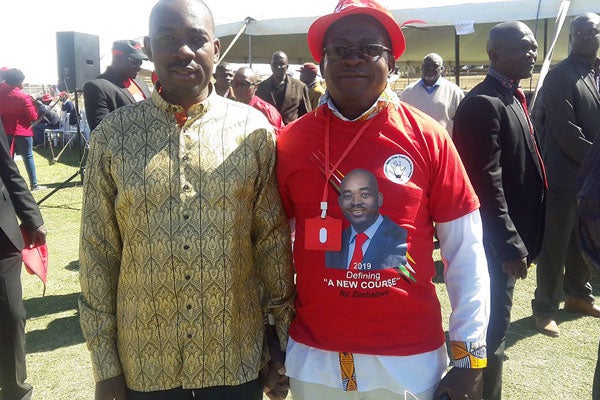 THOUSANDS of MDC supporters slept in the open for the entire duration of their party congress in Gweru at the weekend due to lack of financial resources, amid allegations that the Zanu PF government had “deliberately” withheld money due to the opposition movement under the Political Parties Finance Act.

“I can confirm that government did not disburse our funds. This was totally unfair,” Mwonzora said, equating the move to a financial warfare against his party.

“We budgeted for this congress with that money in mind. Over the years, when there is a congress and the money has not come, we would make a case with the government. In this case, I personally went to make a case with the Justice minister (Ziyambi Ziyambi) and his permanent secretary (Virginia Mabiza), they actually promised us that they were going to pay by Wednesday last week, but the money did not come,” he said.

Government through the Political Parties Finance Act, funds all parties with representation of 5% or more in Parliament.

The Nelson Chamisa-led MDC was entitled to almost $4,8 million which it was eyeing to fund its congress, including paying for delegates’ accommodation.

“We are talking of money in the region of $4,8 million and this congress was actually going to cost us less. What it means is that we were then unable to accommodate our people decently, but you see the resilience of our people, some of them did not have good meals, but there are still here, because these people love their party, love their change and they have to work for their change,” he said.

But Ziyambi denied meeting MDC officials to discuss the issue of the funds, accusing the opposition party of trying to find a scapegoat for its failures.

“I am not aware of the visit. In any case, even Zanu PF has not received its allocation,” Ziyambi said.

In the chilling cold spell that ravaged Gweru over the days of congress and the spiking prices of basic commodities, many MDC activists slept in the open at Ascot Stadium and vowed to keep the vigil until it closed.

Delegate Jairos Vemba told NewsDay that he had sold some of his livestock to fund his stay in Gweru.

“We are a party with no resources, but we have a big heart. This party is ours and we will not tire, we will fund this party with our sweat and tears,” he said.

Chamisa told NewsDay that there has been a protracted warfare against his party.

“Zanu PF has been trying by every turn to bring us down, but this is a people’s project, it will not fail because someone wants to withhold State funding or target the party leadership. Our people are resilient and committed to ensuring that the MDC, as a vehicle for change, delivers,” he said.

Up until late last night, elections for members of the MDC standing committee, which includes top posts of vice-president, treasurer-general, secretary-general, chairperson and vice-chairpersons, were still ongoing.

Tension was high, especially as Mwonzora mounted a fight back against Charlton Hwende in the secretary-general’s race.

Mwonzora has mounted a brave campaign despite being labelled a sell-out. He marched on with his team, declaring loyalty to party, leadership and cause.

Chamisa could be heard consoling Hwende who appeared to be suffering post-electoral stress.

“Don’t stress much about elections, remember my time when I was defeated for the secretary-general position, I was stressed. I wanted to go to the rural areas because my attitude has always been that these are people’s choices,” Chamisa told a visibly distraught Hwende.

Insiders are, however, tipping Welshman Ncube and Tendai Biti to land the vice-presidents’ posts.

However, Lillian Timveous’ supporters were pushing hard to ensure that Linnet Karenyi-Kore does not grab the female vice-president’s slot.

David Coltart appeared set to land the treasurer-general’s position, while Thabitha Khumalo was almost assured of the party chairperson post. For the vice-presidency, Job Sikhala appeared at ease, but his challenger Happymore Chidziva kept him on his toes.

Candidates cited a number of irregularities, saying they never got time to inspect the voters’ roll and feared that names of their supporters could be missing.

Mwonzora alleged they could have been some ballot stuffing after one voter was caught with two ballots.

Chamisa, who has been blighted with legitimacy issues after he was jettisoned to power by the party’s national council to take over from the late Morgan Tsvangirai, said he is now preparing his party for a major showdown with Zanu PF.

Speaking to the media just after pushing a victory lap to a rousing reception by party delegates, Chamisa said the MDC was building a continental giant.

“We are unstoppable, there is no going back. This is a massive political party, a party of the people. We are grateful to (the late) Dr Richard Morgan Tsvangirai, Dumiso Dabengwa and many others who contributed to this great project. I am sure you have seen the provinces and we pray to God and we wait for them to vote and pray that the best candidates will win,” he said.

Having lost many elections to Zanu PF, amid allegations of rigging, Chamisa said the party was going through a transformative stage, especially to ensure the they match the ruling party pound for pound.