Govt to roll out Command Mining 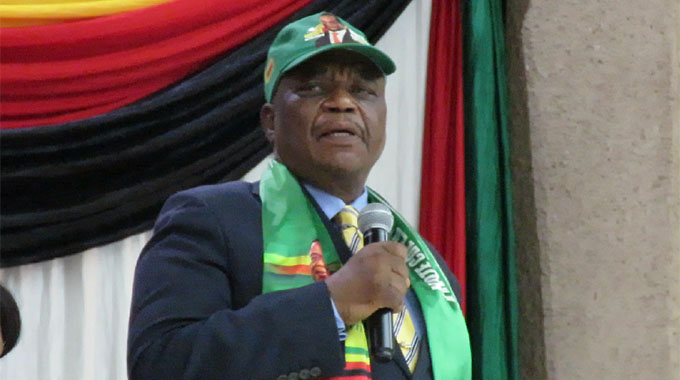 Mash West Bureau
Government is introducing Command Mining for Zimbabweans to fully participate in the exploitation of the country’s mineral resources while contributing to economic development, Vice President Constantino Chiwenga, has said. Addressing thousands of Zanu-PF supporters at a rally at Tengwe Country Club in Hurungwe District, VP Chiwenga said the command element in Government’s programmes ensures that all Zimbabweans commit to the country’s economic development.

He also addressed another bumper crowd at Magunje Business Centre in the district saying Zimbabwe should forget about the pre-November 24, 2017 era and move on in unity and peace.

VP Chiwenga urged Zimbabweans to vote overwhelmingly for President Mnangagwa and Zanu-PF for the new dispensation to continue its programmes.

Vice President Chiwenga said initiatives by President Mnangagwa during his tenure as vice president including Command Agriculture had been very successful.

“We are also introducing Command Agriculture for tobacco farmers, for livestock, but we are also moving to Command Mining so that all Zimbabweans can participate in the exploitation of our mineral resources.

“So what do we mean by command, it means all of us as Zimbabweans, we commit ourselves to achieving our set goals.”
VP Chiwenga said command entails all Zimbabweans to commit to a particular programme while making sure that it becomes fruitful.

VP Chiwenga said the Command Agriculture initiative was so successful that no one would starve in Zimbabwe.
He said Operation Restore Legacy was now past us and Zimbabweans should unite for the development of the country.
“What happened in November last year, it is now in the past. We are moving forward, carrying the good from that era and leave behind the bad from the past.

“The country needs to be united, Zimbabweans from all its four corners, from the East to the West, from the North to the South, all the people in this country called Zimbabwe, which is between the rivers Zambezi and Vambe, I know you call it Limpopo, that is, Vambe.

“All these people, no matter their colour or creed, as long as they are children of Zimbabwe, we need to be united. It does not matter whether they are black, coloured, Indian or white, we are all Zimbabweans.

“We must be united if we are to be a strong Zimbabwe. There is no country in the world that can be developed when the people are not united.”
He said for Zimbabwe to continue attracting investors people should work together.
“You heard that from the time President Mnangagwa and his team took over the Government last year when we said Zimbabwe must be united. When we said Zimbabwe is a sacred land. Zimbabwe is not a country for insulting each other. It is a country where everyone lives in harmony.

“We will maintain this stance. What we now need to do is to be united among ourselves so that we know that if we sow a seed, it can take days to germinate.”

He said that seed needs to be protected until harvest time.
“However, our erstwhile colleagues (in the opposition) are saying since you say you have the money coming in, let us start spending it. Is that proper? Would we be building the country when we do this?”

“But before we have reached the extent of our promises, you have already seen what we have done as Zanu-PF and for the programmes to succeed, we have identified some fundamental principles to guide us as a party and these add up to five points.
“Firstly, there is no way development can be achieved with unity. So we are saying unity, unity, unity. We also want to fight corruption as a nation. It does not matter who is involved, there will never be any progress.

VP Chiwenga said after winning the fight against corruption President Mnangagwa’s Government would move to the development of the country.

“So all of us, whether we are sleeping we should be talking of development, development and development. Let’s all develop our country. United we stand and united together we destroy this animal called corruption and when we destroy it, we develop our nation.”

VP Chiwenga said Zimbabwe was also re-engaging with the whole world after 18 years of isolation.
“As a person, wherever you are, make a few enemies and many friends, because when you have too many enemies you will never know the one who would destroy you as you have enemies everywhere.

“So we should have a few enemies, even none at all. Why should we have enemies? We are all God’s children. All of us we were created by God and we should be united and live in harmony.”