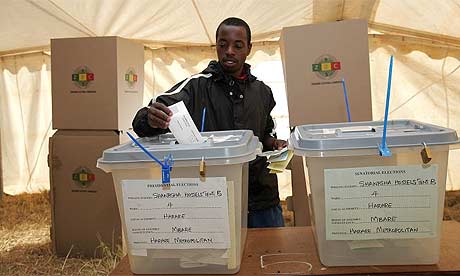 With the recent announcement of July 30 2018 as the election date, Zimbabwe is less than two months away from crucial elections that are expected to restore political legitimacy following the military-led ouster of Robert Mugabe in November 2017.

There are six make-or-break issues that will singularly and collectively determine whether Zimbabwe’s upcoming elections will be free, fair and credible. In no particular order of importance these are: First is the integrity of the voters’ roll. The Zimbabwe Electoral Commission (Zec) announced in early 2016 that it will introduce the Biometric Voter Register (BVR) for the 2018 elections.

The apparent aim was to develop a reliable register or database of voters after over 30 years of a shambolic voters’ roll that was managed by the Registrar-General and known to contain unverified numbers of dead people. A cleaner register would ostensibly create trust and confidence in a largely discredited voters’ roll, which in 2013 was not released in time for inspection and verification by the public and political parties.

It became one of the main sources of the 2013 electoral dispute between Zanu PF and the opposition. Several concerns have been raised about the current BVR, most important of which relates to its authentication. Recently, the Electoral Resource Centre (ERC) requested Zec to share the provisional voters’ register so that it could independently audit or validate it, but the elections body turned down this request. ERC is pursuing legal action to compel Zec to disclose the register. The refusal by Zec to release the provisional voters’ register is worrying. It runs counter to a commission that claims to want to earn public trust and confidence and raises fears the elections body will re-deploy the 2013 strategy for the coming elections.

The danger here is the possible manipulation of the voters’ roll in a variety of ways including resurrecting dead voters; facilitating multiple registration; and deliberately under-registering in certain areas to disadvantage political contestants or parties.

The simple fact is that the public does not trust Zec. In several public surveys since 2013, Zec has consistently scored embarrassingly low on public trust. Refusing to share the voters’ roll for inspection only makes things worse. In fact, in genuine democratic processes, the voters’ roll should be open for inspection, verification, authentication and audit on a continuous basis all the way until the election.

Second is the integrity of the ballot paper and the vote. The ballot paper is the most important document in any election. It sets out who is contesting and provides for voters to select their preferred candidate from a range of choices. After voters have selected their choice, ballot papers are counted and the winner determined. It therefore follows that the rigorous control and accountability over the number of ballot papers printed is central to ensuring a fair electoral contest.

Without this, it is possible and easy to print more than required ballot papers and assign the additional to a contestant, giving them advantage through what is called ballot stuffing — an age old rigging strategy.

Sixth is ensuring equal and fair access to all political parties to public broadcast media. This means that all contestants must be given equal coverage to campaign and canvass for support. Media plays a crucial role in providing channels for both candidates and voters alike to share and receive information about the value propositions of respective candidates and parties. While private/commercial media retains its prerogative to cover and charge parties who use it, public broadcasting media belongs to and must be accessible to all. Currently, only Zanu PF has access to state broadcasting media.

In addition, the coverage of the opposition by state media has been negative and unbalanced. According to daily media monitoring reports produced by Media Monitors Zimbabwe, Zanu PF continues to enjoy overwhelming airtime and space in the state media, including live coverage of President Mnangagwa’s campaign rallies. The few times the opposition is covered, it is to project it negatively. This is clearly in violation of Section 61 (3) and (4) of the constitution, which proscribes editorial interference in the state media and enjoins them to be impartial and afford fair opportunity for the presentation of divergent views and dissenting opinions.

While new forms of media including social media mitigates this challenge in urban areas, low internet penetration and connectivity in rural areas means that public broadcast remains the most accessible to rural communities where the majority of voters reside.Successive audience research in Zimbabwe shows that the majority of Zimbabweans rely on radio, especially the state-run outlets, for information.

While, the six make-or-break issues sound alarming, there is still time—albeit very little—to remedy these flaws before they deliver fatal blows and irredeemably taint the transparency and credibility of the very crucial 2018 elections. The window for fixing them is shutting—fast!

Malunga is the executive director of the Open Society Initiative for Southern Africa. (Osisa).