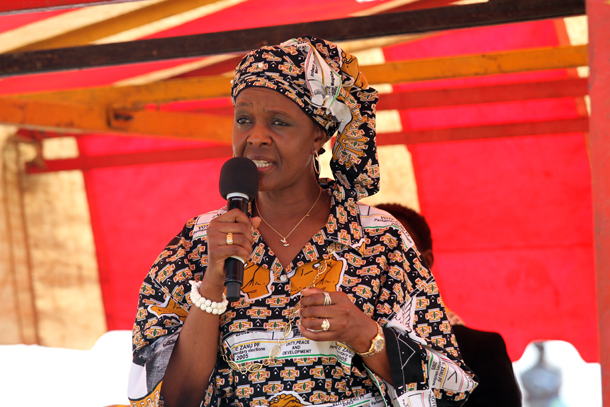 FORMER first lady Grace Mugabe’s ambition to become vice-president has torpedoed coalition talks between the MDC Alliance and the National Patriotic Front (NPF), resulting in the disbandment of a steering committee tasked with handling the delicate negotiations, it has emerged.

This will see MDC Alliance presidential candidate Nelson Chamisa taking over direct discussion with the former first family, it has emerged. Senior officials from the MDC-T led by Chamisa told the Independent in off-the-record briefings that the planned electoral strategic coalition, which would have seen former president Robert Mugabe and the audacious Chamisa join hands in a bid to defeat Zanu PF’s Emmerson Mnangagwa in the July 30 general elections, have now virtually collapsed.

In meetings before nomination court sat, this was after the NPF — a party which has Mugabe’s backing behind the scenes — demanded that they needed an arrangement in which the position of vice-president would be allotted to them and, reciprocally, the Mugabe-backed NPF would deliver an electoral advantage to Chamisa.

The NPF also demanded that 82 National Assembly seats be reserved for its candidates, something which did not go down well with the other parties in the MDC Alliance.

Sources close to the developments said in addition to publicly backing Chamisa so that he gets residual Zanu PF officials and supporters that still sympathise with the deposed 94-year-old Mugabe, who was toppled in a military coup last November, the Mugabes were also offering US$24 million to fund Chamisa’s campaign.

Mugabe also offered 12 vehicles which were to be used in the build up to the elections. But while the rest of the MDC Alliance principals promptly rejected the demands of the NPF, Chamisa is said to have warmed up to the idea of working with the Mugabes, especially considering that the funding that would come along with it would come in handy — given the insolvency of his party.

That, sources further said, strained relations between him and the other MDC Alliance principals who were not prepared to make a compromise. Chamisa responded last month by disbanding the steering committee, which was chaired by MDC-T national chairman Morgen Komichi.

The Zimbabwe Independent also learnt that Chamisa stormed out of a meeting of the MDC Alliance principals last week when the matter came up again for discussion.
As a result, relations between Chamisa and other MDC Alliance principals, particularly Welshman Ncube, Jacob Ngarivhume, Agrippa Mutambara and Tendai Biti, have now soured.
According to a senior MDC official who was part of the disbanded committee, problems arose when the committee passed an adverse verdict on the engagement with Mugabe and his wife.

“The president (of the MDC-T) sent us to South Africa to discuss with these people. We met with Patrick Zhuwao, Jealousy Mawarire, Jeppy Jaboon and Shadreck Mashayamombe. We discussed the possibility of them joining the alliance and the negotiations were progressing really well until they started throwing in impossible demands like that they wanted 82 seats to be reserved for them and that Grace was going to be vice-president,” said the official.

“We made it very clear that we didn’t think that the involvement of Mugabe was a clever thing since we believed he had run his race. The wife is worse. So we couldn’t agree. We came back and reported to the principals. We passed the verdict that the deal was bad but, for some reason, the president insisted on continuing with the deal,” the official, who kept referring to Chamisa as the president said.

An MDC Alliance principal, who also spoke on condition he was not named, accused Chamisa of lacking commitment to the alliance from the time that talks with the NPF opened.
“We all realised that, suddenly, he was not committed to the alliance. In some instances, some senior officials in his own party were accused of involving themselves in the MDC-T factional fights. All the principals are complaining bitterly. Mutambara, for example, has always questioned why Chamisa’s wife was being sidelined. They began to see him as a cheat, and we insisted on him to treat all alliance partners with respect. But he doesn’t listen to anyone,” the principal said.

Another principal added: “One other thing which we realised has been a push factor to Mugabe was finance. Mugabe had promised some money and 12 cars. I know he has been receiving calls from Grace. We don’t have a single cent or car right now. But the rest of us said we would rather sacrifice than involve ourselves with Grace whom we all know is heavily discredited. The alliance campaign isn’t funded. Donors have refused to give us money. They have also raised the issue of violence, particularly the Khupe issue and lack of constitutionalism.

“He just decided to disband the steering committee because we weren’t in agreement. Our problem was with the specific role that Grace would then play and I thought it wasn’t a good idea, although a pact with NPF wouldn’t have been a bad thing but a specific role to be played by former first family. Things have really gone bad in the alliance since then. For instance, at the meeting of principals last week, Ngarivhume raised the issue and also asked about what was being done to solve the issue of double candidates in parliamentary constituencies. As you now know, Ngarivhume, was supposed to stand for the alliance in Bikita East but now the MDC-T clandestinely cleared its candidate to also stand,” he said.

“So when Ngarivhume raised those issues, Chamisa responded by saying he preferred to have a one-on-one with Ngarivhume and excused himself from the meeting, saying he had a busy schedule and walked out on all of us. When Ngarivhume later tried to pursue that one-on-one meeting, he wasn’t given the chance.

“I can tell you that the senior leaders in the party are extremely unhappy about that type of leadership. Soon after the election, that would be the end of that alliance. You have almost half of the top leaders vowing not to vote for him, very disgruntled senior leaders,” the source said.

Chamisa’s spokesman, Nkululeko Sibanda, denied the reports, saying they were being peddled by his internal party rivals.

“I don’t know anything about my president corresponding with Grace and, if I don’t know, it means it’s not happening. I have his timetable and I don’t see any meeting with Grace there. These are lies coming from people in the party and we know them. In fact, you shall see more of these stories being planted in the remaining three weeks leading to the elections,” he said.

NPF spokesperson Jealousy Mawarire confirmed that they demanded the vice-presidency in the event that the MDC Alliance wins the polls, but said the question of who should be occupying that position would be for his party to decide.

“We are clear that with the critical mass we bring to the alliance, we deserve a senior position like VP and we are very clear that the choice of who would become VP should be left to the internal processes within NPF. We agreed that NPF will field 82 parliamentary contestants and this was based on scientific considerations which took cognisance of areas where we are stronger than any of the entities in the MDC Alliance,” he said.

Mawarire also confirmed that talks were still going on with Chamisa’s MDC-T but declined to disclose who they were now deliberating with on that other side.