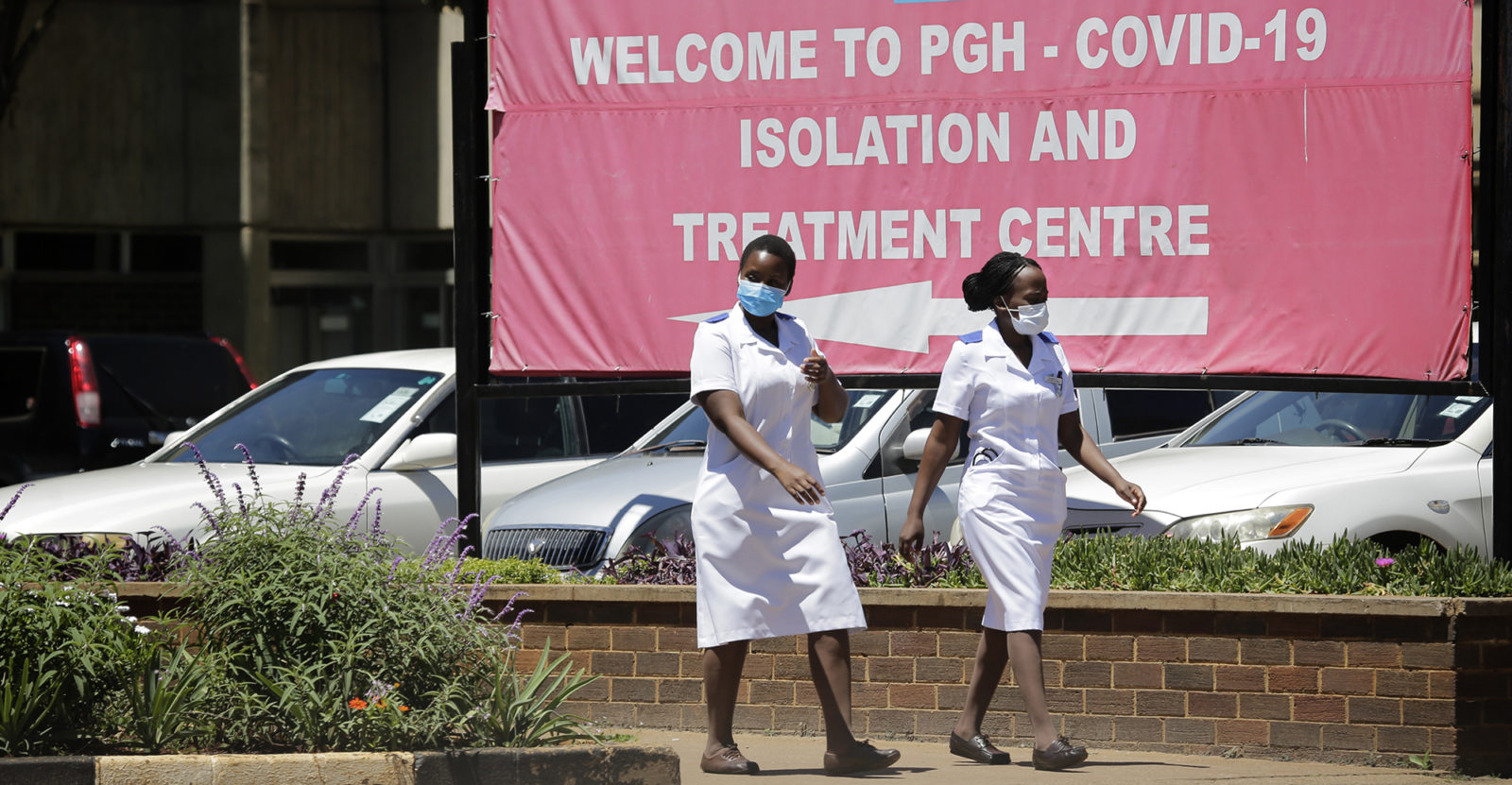 Health workers in Zimbabwe have been on a continuous collision path with the government for many months. (Photo: EPA-EFE / Aaron Ufumeli)

An increasing number of nurses have tested positive for Covid-19 at Harare’s biggest hospital as Zimbabwe succumbs to a second wave, while more staff were issued with suspensions and disciplinaries for alleged misconduct.

More than 120 Zimbabwean nurses at Sally Mugabe Central Hospital (SMCH) have tested positive for Covid-19 as the country endures a harsh second wave of the coronavirus, since the beginning of its first lockdown in March 2020. Shortages of PPE, water, electricity and basic medicines continue to haunt the country’s biggest hospital in what could easily become a significant health catastrophe.

Speaking to Daily Maverick, the spokesperson of Zimbabwe Nurses Association (Zina) executive committee at SMCH, Tapiwa Jason Mutambara said, “So far we now have over 120 nurses who have tested positive at Sally Mugabe Central Hospital to date. The number could be more because we have nurse managers who, for various reasons, could not come out because they do not associate with other nurses of lower ranks due to their agreement of service which doesn’t allow them to be open.”

Mutambara is a state-registered midwife. He and his wife are nurses at SMCH. Both tested positive for Covid-19 recently and are recovering in their Chitungwiza home, about 20km from the capital city Harare. He feels they are “fighting a lone battle” and are being “neglected” by their employer, who has not checked on them since they tested positive.

“We are not getting any psychosocial support, medication, a good diet, sanitisers, face masks and many other things to take care of the affected health workers who are in isolation. These things are far beyond the reach of many, thus further complicating the situation and even increasing the possibility of infecting other innocent people at home,” said Mutambara.

Denying the assertions by Mutambara, Ministry of Health and Childcare spokesperson Donald Mujiri told Daily Maverick, “The 120 nurses’ story is simply not true. From the beginning of the year to 11 January we have had a total of 96 healthcare workers testing positive with only 39 of these from nursing.”

On 7 January, the 1,300 nurses at SMCH were joined by hundreds of nursing professionals from Harare and Bulawayo province in downing tools over a lack of PPE, following the death of a matron and two nurses from Covid-19. The government quickly moved in to avert possible catastrophe by providing PPE for nurses to resume their duties, despite high levels of fear and demoralisation among hospital staff.

Zina successfully appealed to the high court against a government directive, given in 2020, which cancelled flexible working conditions. Zina called for the flexible position of working 40 hours over three days to be maintained, while the government had directed that all nurses work the same 40 hours over seven days.

Zina President Enoch Dongo told Daily Maverick that, “Authorities are not in a capacity to provide enough PPE if all nurses report for duty at once. Reverting back to the flexible working hours will resultantly reduce the number of nurses being exposed to the deadly virus at any given time in our health institutions.

“This will also ease the pressure on government to provide the required PPE to the fewer nurses who will be on duty,” said Dongo.

“Sally Mugabe Central Hospital has been addressed and we will continue to keep a watchful eye on the situation as we fight this deadly pandemic, but like any other country, be it America, South Africa or Britain, we have had a significant number of our healthcare workers contracting Covid-19. We are aware of the challenges and clear on our priorities that provision of PPE is number one.

“Effective use of PPE was also a challenge in the nurses’ predicament and so we have embarked on training our entire healthcare workforce to make sure that this limited resource is used wisely. Furthermore, we have also incorporated local producers to assist with the production of PPE in order to reduce the prohibitive import costs,” Mahomva explained.

Authorities responded by instituting a new nationwide lockdown on 5 January 2021 putting into effect a daily 6pm to 6am curfew.  International and interprovincial travel by land is prohibited, while international air travel is still permitted, subject to testing requirements.

What is to come?

Several nurses have been suspended since 12 January, for publicly commenting on issues concerning the lack of PPE. Some have opted to resign citing frustration, according to Mutambara. Undoubtedly this action is unsettling among hospital staff as fear of victimisation by the government coupled with death by coronavirus rages on.

“It’s true that at least four nurses have been suspended whilst investigations are going on, for alleging that management is manipulating Covid-19 results. This is a lie that puts the country’s testing programme in disrepute,” Mujiri told Daily Maverick.

“The other nurses were suspended for alleging that one matron had given an instruction to doctors not to give off duties to genuinely ill nurses, sending messages that hearses of bodies were failing to get parking at the hospital due to the massive deaths at the institution and that staff was not being given PPE at all”, explained Mujiri.

Evermay Makoka, chairperson of Zina at SMCH, was suspended without pay on 14 January for allegedly recording an audio clip explaining the dire situation at SMCH.

Makoka, however, told Daily Maverick that she was, “not the author of the alleged recorded clip” and has “engaged the association’s lawyers together with Zimbabwe Lawyers for Human Rights” for legal defence.

Samson Gurupira, a nurse at SMCH, was also served with misconduct and suspension charges.

The heavy-handed response by Zimbabwean authorities against demonstrating health workers in July 2020 shocked the world, as images were captured of riot police chasing nurses in uniform while breaking up a protest outside SMCH. Eleven nurses were subsequently charged with breaching lockdown regulations.

Health workers in Zimbabwe have been on a continuous collision path with the government for many months. In 2020, doctors led the longest strike yet in the country by medical professionals over poor remuneration, lack of PPE and basic medicines for patients.

The former Minister of Health and Childcare Dr Obadiah Moyo was arrested in 2020 over a US$60-million Covid-19 equipment procurement scandal. DM