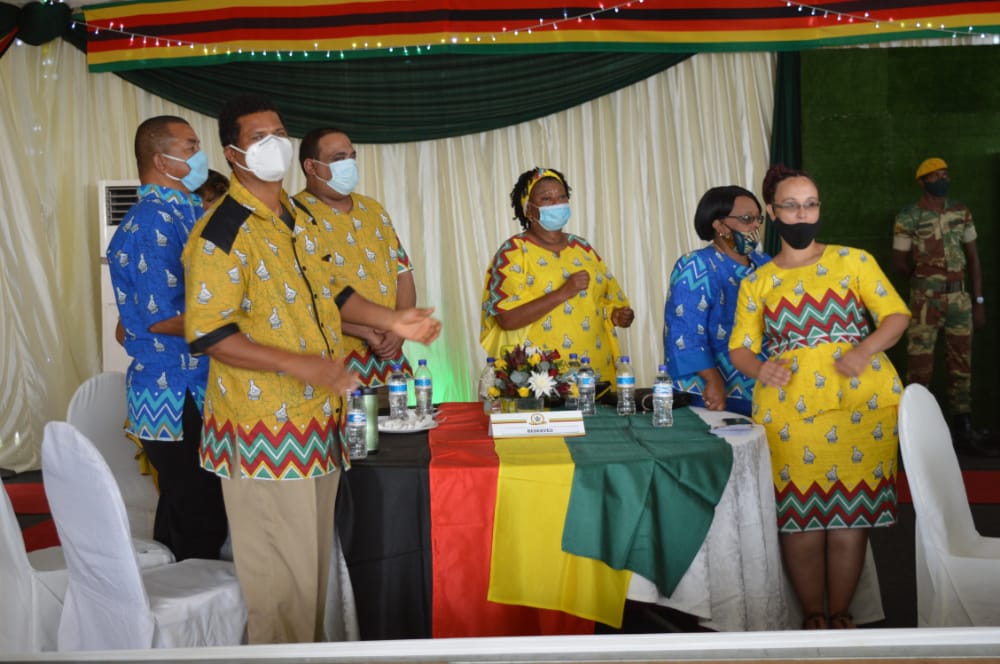 A mid pomp and circumstance, something called the National Dress Fabric was launched last Saturday, but there was one missing detail: who manufactures the fabric? Speeches full of platitudes were said and read, but this small detail was glaringly absent.

Said President Emmerson Mnangagwa: “The fabric plays an important role in the preservation of national values and cultural heritage and helps create unity among our people. I challenge the citizenry to conceptualise our apparel as more than just a form of identity. It must be a bridge, joining communities with the uniqueness of their heritage bla bla bla . . . Going forward, as Zimbabweans, both here and in the Diaspora, let us now promote our country’s sovereignty and national identity through this National Dress Fabric bla bla bla.”

First Lady Auxillia Mnangagwa, who is credited for the success of the research, identification and launch of the fabric, said she intended the National Dress Fabric to depict the country’s traditions, history, national heritage and aspirations while being appropriate to all social and religious gatherings. But where is this fabric from? David Whitehead is comatose; so is Cone Textiles; which textile manufacturer gave us this material? Wouldn’t it have been great had the textile borne the signature, “Made in Zimbabwe”?

Let’s take a look at Zimbabwe’s cotton value chain. Cotton was once dubbed “white gold” because it enriched everybody in the chain from Gokwe, to Sanyati to all those semi-arid areas where the crop thrives to the manufacturers and retailers. We exported finished fabrics and clothing to the whole world. Some of the greatest clothing labels including Van Hussein were made in Highfield!

But what has happened to that? Now our farmers have been impoverished by a system that does not recognise and reward people who work hard. Our poor cotton farmers are owed about a billion dollars by buccaneering middlemen and state enterprises that should promote them. Laughably, this season farmers were paid in grocery hampers after all their toil: a packet of sugar, a packet of salt, a bottle of Mazoe and a bottle of cooking oil were about all they got after such backbreaking work.

This is what has resulted in the collapse of the whole textile industry; with not much cotton delivered by the farmers, fabric manufacturers couldn’t survive and that cascaded to the whole value chain.

Because of this negligence on the government’s part, gates were opened for the importation of cheap second-hand clothing and textiles from Europe and the East, which imports have hammered the last nail into the coffin of our own industry. Now we are importing cheap fabrics from China or some such predatory country and calling it our national fabric! It’s much like saying the Honda Fit is our national car because about everyone drives one. Had the fabric been manufactured in Zimbabwe using our own cotton then the last week’s launch would have been the icing on the cake.

Chimanimani East Member of Parliament Joshua Sacco has sent a distress signal. He wrote on his social media handle: “There are predictions of Cyclone Chalane hitting Beira on the 30th of December and Eastern Zimbabwe, with Chimanimani in its path on 31st December. We pray that this Cyclone loses its velocity before it hits Beira and Zimbabwe. Mwari pindirai (God please intervene).”

True, weather experts on Monday warned of a tropical storm that is building up in the Indian Ocean and could make landfall in Madagascar this weekend and proceed towards the Mozambique Channel early next week. They said the ongoing heating of the water surface in the southwestern Indian Ocean is expected to result in a tropical storm forming during the course of this week. It warned that the storm would result in periods of heavy rainfall, gusty winds and rough seas in northern Madagascar and surrounding areas. Rainfall of great magnitude was expected to result in flooding and increased mudslides.

Going by a report elsewhere in this newspaper, it looks like the government has been listening. An emergency national subcommittee made up of the Civil Protection Department, the Zimbabwe Defence Forces, the Zimbabwe Republic Police, the Ministry of Public Service, the Ministry of Information and the Meteorological Services Department met yesterday to plan a response.

That is as it should be. But, hey, poor Sacco, all he could do was plead with God to intervene! It is this kind of superstition that has been the bane of our people’s response to emergencies. Instead of taking action, they kneel down and pray. What are the chances that the same God would stop a cyclone he created, if it’s him really who controls the weather on a day-to-day basis?

The people of Chimanimani should know better now than to wait for divine intervention. Instead of kneeling down to pray they should run. Yes, the government has promised to be on the ground early to alleviate any plight that might befall the people, but the people should take their lives into their own hands, so to speak.

Those who can move should move immediately. Families with elderly people and children should already be moving to safer places. That also should include moving livestock. What we don’t wish to see again is groups of homeless people with nothing to begin rebuilding their lives.

Zimbabweans must have heaved a sigh of relief on hearing the government is ready to roll out Cocid-19 vaccinations, especially after the country had been receiving the gloomy news that the vaccines being rolled out in Europe and in America are likely unsuitable for African countries due to the climate.

One of the vaccines has to be stored in temperature below -70 degrees C, while the other is okay in our deep freezers. After such announcements many Africans had given up hope of getting the jab in the next 24 months while the disease continues to ravage the continent.Zimbabwe has re corded 12 047 cases of the coronavirus since the beginning of the pandemic, with 316 people having died from it. In recent weeks the country has witnessed a spike in new infections, with 3 218 new cases having been recorded between November 16 and December 18. Like all the other countries of the world, Zimbabwe therefore needs vaccines as soon as possible.

The announcement by President Mnangagwa this week is therefore welcome but a number of questions still need asking. The president doesn’t name the vaccines that will be used in Zimbabwe, neither does he say where they were trialed. This is important since vaccines cannot be assumed to work in a similar manner in different geographical locations. We have already seen how temperature is a factor in the two vaccines being rolled out in America and Europe. In the recent past the question of vaccines has become a political issue. Scientists in the developed world have used Africans as guinea pigs before in testing their medicines. Often they have done this for clearly racist reasons.

Does Zimbabwe have a standard operation procedure in trialing and deploying vaccines? It would be great if our Ministry of Health came out clean on this. We have a very good cadre of medical personnel in this country including medical doctors and scientists; have these been involved in the testing of these vaccines? If so, can they vouch for the vaccines before they are rolled out onto the gullible population?

Muckraker isn’t anti-vaccination and would love to have Zimbabweans, like all the other peoples of the world, enjoy the scientific successes that promise to tame a virus that has marauded across the globe killing millions of people. But in our rush to save our population care should still be taken.