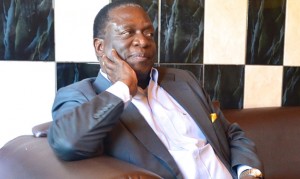 WHEN newly inaugurated President Emmerson Mnangagwa announced his Cabinet on November 30, much focus went to the personalities he named as he cut the number of ministries to 21, from the previous 27.

He combined some functions, such as Finance and Economic Planning, Defence, State Security and War Veterans Affairs, ICT and Cyber Security, as well as Women and Youth.
Few, however, noticed an important tweak — the dropping of the ‘Indigenisation’ function, a sabre-rattling platform for successive ministers under former President Robert Mugabe.

The indigenisation portfolio, overseeing a law requiring local majority control in all major businesses, had become one of the most notable ministries, but has since been reduced to a desk in the re-calibrated Ministry of Industry, Commerce and Enterprise Development, under the business-friendly Mike Bimha (pictured).

The downgrade was to be followed by an announcement, during last week’s 2018 budget presentation by Finance Minister Patrick Chinamasa, of the effective repeal of the indigenisation law, save for the diamond and platinum sector.

The Mnangagwa’s government attitude towards the indigenisation policy, blamed by many for Zimbabwe’s inability to attract foreign investment, was summed up by his spokesman George Charamba in an interview with the Zimbabwe Independent last week.

“It (the law) promised empowerment to indigenes, which it never delivered, while scaring investors who gave us their back. We were the net loser. Not a single person was empowered and not a single investor came. We behaved like we have rare earth minerals and forgot that though highly mineralised, we don’t have deposits which change the world market,” Charamba told the newspaper.

“We have platinum, but we are ranked number three, our gold production is struggling to reach 27 tonnes a year. So we don’t rattle global markets, but we rattle small investors. That is the reality — to know that loud, restless lips sink ships.”