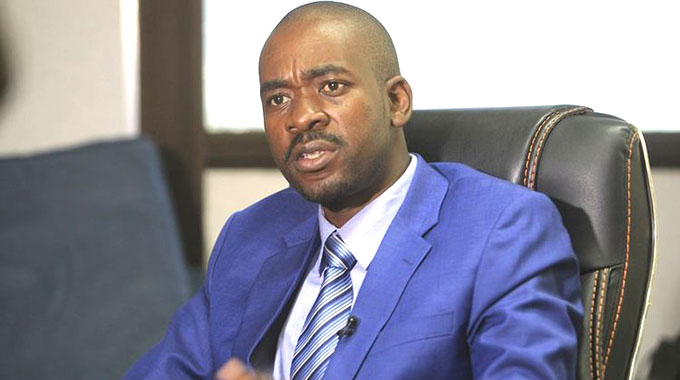 MDC-Alliance leader Mr Nelson Chamisa is facing increasing isolation after being dumped by a team of scholars he had roped in as advisors and also by close lieutenants who are not happy with his failure to furnish them with the evidence he claimed to have to support his rigging claims.

A source close to developments said Mr Chamisa, who has been cutting a lone figure at his daily Press conferences, was now reconsidering his militant position and had sent emissaries to the Presidency in a bid to establish contact.

‘‘What has happened is that all the scholars who were working with Chamisa have either left the country in a huff or have gone underground,’’ said a source at Harvest House.

‘‘In the case of Komichi and Sibanda, the spokesperson, there is a very strong case against them related to contempt charges because when ZEC sits it sits like a court so the fact of storming ZEC was contemptuous,’’

MDC Chamisa faction national chairman Mr Morgan Komichi with Chamisa spokesman Dr Nkululeko Sibanda in tow stormed the Zimbabwe Electoral Commission (ZEC) national command centre as the Presidential elections were being announced and took the microphone to announce that they were not accepting the results.

‘‘In respect of lawyers who were backing Chamisa in the hope of election-plenty, they are now facing a grim professional future.

“Hard statements were made against the entire bench, which is not amused.

‘‘Politically partisan positions were taken as if there were no practicing duties the morning after. In desperation the lawyers so affected have signalled distress by communicating their desire to dissociate themselves from the losing candidate in order to go back to quiet practice,’’ the source said added.

What has made the lawyers position more untenable, the source said, was that not only is the MDC-Alliance case frivolous and vexatious in the absence of the V11 forms, but very senior lawyers within the Alliance had not been favoured with evidence that goes towards making a good case for the planned court challenge.

‘‘When they challenged the MDC-Alliance leader to provide them with evidence, they were branded Zanu-PF agents,’’ the source said.

According to the source Alliance Principal Tendai Biti, who was on the run, has been asking for some kind of reprieve so that he gets back to normal life as a lawyer and parliamentarian.

Biti is reported to be worried that should he be convicted for wilfully violating the Electoral Act, he would lose his parliamentary seat and the tantalising prospect of being the leader of the opposition in Parliament.

Some senior members of the MDC-Alliance with a legal grounding are reported to be so agitated that they are accusing Chamisa of wanting to ‘die with the party’ which they built over the years.

‘‘Chamisa at this stage is ripe for shaking,’’ said the source.

‘‘However, the young man is not waiting to be eaten instead he is reconsidering his militant position as well as his legal options, and this is prompted by lukewarm statements from the West which he hoped would give him a new lease of life politically,’’

Yesterday, the EU released a statement which called for investigations into the violence, hooliganism and shootings that occurred last week when MDC youths youth ran riot in Harare.

‘‘Such an inquiry,’’ the source said, ‘‘is highly unlikely to leave Chamisa unscathed given his pre-election bellicosity.’’

At the heart of the Western ambivalence is the Alliance’s unexpected embrace of former president Mr Robert Mugabe, a figure who stinks in western nostrils.

Mr Chamisa’s association with Mugabe has alienated both the West as well as leading personages in the MDC-Alliance among them party secretary-general Mr Douglas Mwonzora.

In light of the net desertions, the crackdown on suspected hooligans, The Herald has it on good authority that Mr Chamisa has been trying various avenues of re-opening communication lines with President-elect Mnangagwa and Government.

‘‘He has sought to send some diplomats to reach out, he has approached church leaders, again to reach out, but more significantly he has sent distress calls to the Presidency looking for some contact,’’ the source said.

Mr Chamisa is reported to be running against time given that the window on electoral challenges closes on Thursday and sadc is set to meet for its 38th Summit in Windhoek in a little over a week.

‘‘His isolation is now complete and if Komichi, Sibanda and Biti are arrested, it means he is virtually by himself. In the case of Coltart, nothing much is coming from him except Twitter support and even then Coltart has lost status within the white community which now regards him as senselessly headstrong. The little leadership position he wielded has been lost to Eddie Cross who commands the ear of the white community,’’ said the source.

A sadc diplomat, who spoke on condition of anonymity, said Mr Chamisa had dug himself into a hole.

‘‘There is very little sympathy for Chamisa not so much as an individual, but as a tendency within the opposition. A few sadc countries, including South Africa, are set to hold their elections next year.

‘‘Even Nigeria, Africa’s most populous nation, is also holding its elections next year. African governments are keen to send a very clear message against losers who are not graceful and Zimbabwe’s experience comes at an opportune moment for them. Looking into the crystal ball, one sees sadc passing a resolution which will embrace the electoral process in Zimbabwe, but also decry opposition-induced electoral violence. Once that happens, it means Chamisa will be left with an ambivalent Western voice, in which case, the Alliance will go back to its old image as a western political construct,’’ the envoy said.

President-elect Mnangagwa yesterday met a representative delegation of African diplomats accredited to Zimbabwe who were accompanied by their counterparts from Asia and the Americas. They all congratulated the President-elect on his victory saying they had lessons to learn from Zimbabwe.