It’s time to bite the bullet 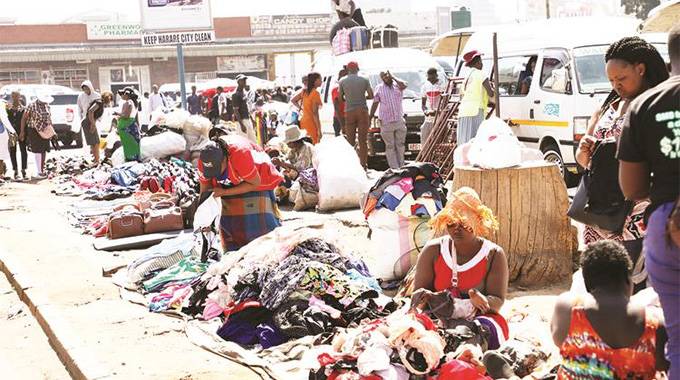 At least 70 percent of all second-hand clothes globally find their way to Africa, leaving the clothing and textiles industries in limbo

Victoria Ruzvidzo In Focus
Zimbabwe will have to make urgent, drastic and in some instances very painful decisions over the coming few weeks if the economy is to grow at the anticipated pace.

There is so much that needs reviewing or completely discarding so the economy can embark on an effective recovery. Pin-stripe suits will have to give way to worksuits where need be.

Instances where jackets were left on the chair for days while the owners gallivanted will have to be a thing of the past. The “Pending” trays should not pile up but everyone should do the work that is required of them and even go the extra mile if the new thrust is to yield results.

Performance management systems need not be a mere routine but should be adhered to and corrective measures taken where necessary.

We got a cue already from President Mnangagwa’s inaugural speech in which he reiterated that the economy will be his Government’s number one priority and that everyone must join hands with Government to ensure the desired results are achieved.

Indeed, there is so much that is outstanding that needs to be done. There is need for a policy shift in some instances, and mindset shifts in others if economic recovery is not going to be mere talk and wishful thinking.

For instance, Government urgently needs to move on the importartion of second-hand clothing and second-hand vehicles if these respective sectors are to come alive again. We did say some of the decisions will be painful.

While we all agree that second-hand clothing imports have brought relief across the entire social specrum as both the very poor and the haves have found solace in the low prices and often high quality apparel found in the s0-called “mabhero”, this does not mean we should as a country turn a blind eye to this vice.

Second-hand clothes have been attractive even to the working class and well-to-do who find top-notch brands at a fraction of the prices these would ordinarily fetch in the average retail shop or boutique.

But a decision will need to be made to ban these clothes. In fact, that decision was made some time ago but it has not been implemented. The advent of the second-hand clothes has brought joy to families and yet much more pain to others. Over the past few decades, major textile firms such as Cone Textiles and David Whitehead have succumbed to the competition brought about by cheap second-hand clothes.

This led the loss of thousands of direct and downstream jobs. Therefore, if the clothing and textile industry is to be resuscitated, second-hand clothes will have to be banned. Of course, many families are surviving from the proceeds of this business but a more global pictures suggests that the economy will perform better if the local clothing and textile sector was revived.

It has become a multi-billion-dollar global business that has left Africa poorer. Research has shown that the disadvantages of second-hand clothes far outweigh the benefits for African economies.

It is in this regard that we implore Government to enforce the ban on second-hand clothes.

In Zimbabwe “hembe dzemabhero” (clothes from the bales) have carried the day for many. In such countries as Kenya and Mozambique they call them “clothes of dead white people” and “clothing of calamity” respectively. Despite the connotations here, many have still found joy and relief in buying these for their families.

In this country most of the clothes sell for 50 cents to $1 for such items as blouses and skirts while dresses, trousers and jackets fetch slightly higher amounts. The prices are a tiny fraction of what retail shops charge, but all this comes at a huge price that the economy cannot afford.

Enforcing the ban of these second- hand clothes is exactly what President Mnangagwa must have meant when he said radical steps and reforms would need to be undertaken.

That the business has become a viable source of livelihood for many is quite understandable but this will have to give way to more sustainable strategy of resuscitating the local clothing and textile industry that will bring about better and more paying job prospects.

We thus anticipate action in this regard.

In Rwanda, for instance, President Paul Kagame has banned the importation of second-hand clothes. This has made him unpopular with the United States to the extent that Rwanda no longer enjoys some of the economic benefits associated with AGOA but the man will not relent.

We all agree that in a short space of time Rwanda has become one of the most powerful economies of Africa. There must be something right about banning the second-hand clothes imports.

Furthermore, the advent of second- hand cars has afforded thousands of Zimbabweans with an opportunity to own a vehicle, a status that many have always wanted to achieve. However, these imports, just like the second-hand clothes, have resulted in the collapse of the local vehicle assembly sector.

Most Zimbabweans have resorted to importing their personal or business vehicles, leaving local assemblers such as Willowvale Mazda Motor Industries, in the lurch.

Presently these firms are operating at an average 10 percent of their capacity. This scenario is quite understandable in the sense that most of the locally assembled vehicles are beyond the reach of the majority.

But be that as it may, solutions need to be found to breathe life into the local motor industry. Early this year Industry Minister Mike Bimha launched the Zimbabwe Motor Industry Development Policy which will see a phased banning of second-hand vehicle imports. Although there has been an outcry, in the final analysis it will be more beneficial to the economy if the ban was effected and affordable hire purchase terms introduced to facilitate Zimbabweans to buy the cars locally.

Banks can introduce concessionary financing terms so that it becomes easier for Zimbabweans to buy locally. Presently second-hand vehicles constitute up to 50 percent of Zimbabwe’s vehicular population of about 1,4 million cars.

Government will need to lead from the front in this instance. Although there is a requirement that  Government departments must buy local vehicles, this has been largely ignored.

Ministers and Government departments drive very expensive imported cars with only a few, if any, locally assembled ones in their parking lots and backyards.

But in a bid to promote the “Buy Zimbabwe” policy, a Cabinet circular was issued in 2105 directing all parastatals and Government departments to buy vehicles from Willowvale Mazda Motor  Industries or Quest Motors.

The temporary pain will have to be bearable for the greater good and prosperity of our economy.

Furthermore, the import list will have to be revised or enforced vigorously to ensure there is no smuggling of goods that have been removed from the list, particularly for those products such as cooking oil that are available locally.

Of course, those that enjoy luxuries such as imported chocolates, wines, bottled water, butter, cheese, etcetera, will have to pay a high price for such as a measure to conserve the few greenbacks  available on the market.

Indeed, everything must be done to ensure foreign currency is available for critical imports such a fuel, electricity, medical drugs, raw materials and machinery but Zimbabwe cannot afford to spend millions of dollars annually on chocolates, water, weaves, etc.

There is need to tighten belts and forgo some luxuries as long as it is not a matter of life and death.

The President was quite incisive on his intolerance of corruption. It is certainly a vice that the economy should not allow at all. Billions of dollars have been lost in this economy through corruption.

This is not an easy one to deal with and measures will have to be put in place to alleviate the scourge and ensure culprits are brought to book and dealt with decisively.

The next few months will have to witness a rolling up of the sleeves as everyone gets down to business. The economy has immense potential to recover but the pace at which this will happen depends on the change of attitude and mindset of all Zimbabweans within and without our borders.

Work is cut out for Government already and for all of us in our little corner.

The die is cast!

In God I trust!