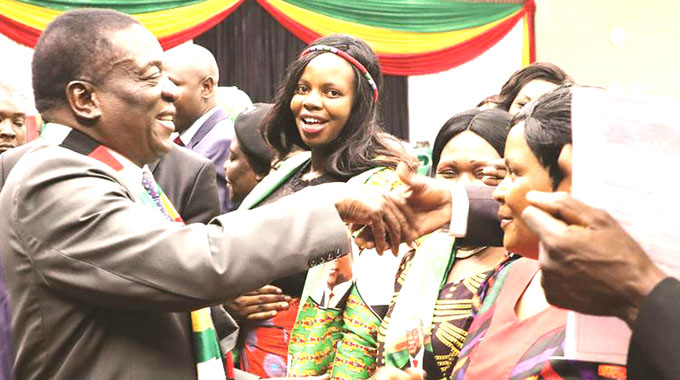 President-elect Cde Emmerson Mnangagwa greets zanu-pf Members of Parliament and other members after addressing them in Harare yesterday. — (Picture by John Manzongo)

The revolutionary party secured a comfortable two-thirds majority after amassing 145 seats out of the 210 contested constituencies.

His positive showing in the polls was despite spirited efforts by some candidates to do a “Bhora musango” where they urged the electorate to vote for the National Assembly members only and not the President.

Cde Mnangagwa reiterated that after bagging such a convincing victory, there was no basis for a Government of National Unity.

The President-elect said this while addressing Zanu-PF winning candidates in Harare yesterday.

Cde Mnangagwa said measures would be taken against those who engineered “Bhora musango”.

He commended Bulawayo Province for performing well both in the Presidential and House of Assembly polls.

“I have been given a report showing statistics of the number of votes attained by the MP and the President in every constituency. I want to talk in general terms,” he said.

“There were others who were saying vote for the MP but as for the President just do what you think is good for you. We now know these people. What it shows is that such comrades do not rely with the leadership of party. So such people should be retired and if they want to come back they should come back as full members of the party.

“What we want is unity from the grassroots level up to national leadership speaking one message. That is why we have party ideology. We should all follow party ideology wherever we go.”

On the violence that rocked Harare after the polls where six people died, President Mnangagwa said: “Yes, after our peaceful elections we encountered an unfortunate incident where MDC-Alliance engaged in acts of violence and burnt several cars, property and beat up people. We never imagined that there will be violence in our country because we were preaching the gospel of peace throughout our campaign.

“We voted in peace but we have this incident of violence by drunk members of MDC-Alliance burning buses and I am told that they wanted to lock up and burn people at Zanu-PF provincial offices in Harare. We had few people in Harare after others were deployed to man elections across the country. After noting that the situation was going out of hand, the police officer who was in charge in Harare sought assistance from the military.

“During the violent protests, six people died and we regret the loss of life in that incident. The police officer who sought military assistance did so in line with the provisions of the Public Order and Security Act but the matter is now being misrepresented on social media but the truth will not change. We, however, continue to preach peace in our country.”