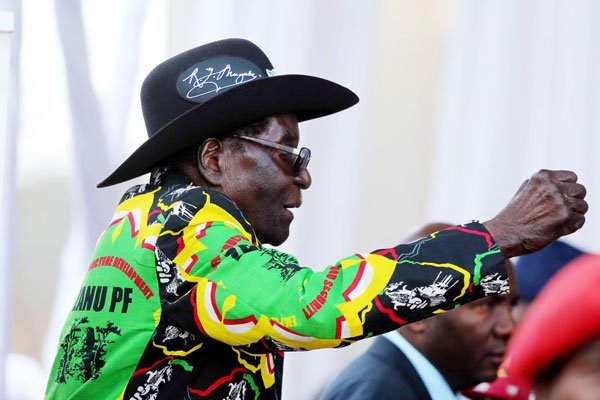 Most of you are aware that we survive in an era in which primitive behaviour, such as the staging of coups, is acceptable.

etter to my people BY DOCTOR STOP IT

Most of you are aware that we survive in an era in which primitive behaviour, such as the staging of coups, is acceptable.

But far from that, the Great Gushungo and the royal Queen Giresi are doing very well in Singapore.

The source of the happiness that we are experiencing can be located in the matters of the heart being experienced by our two sons.

Can you imagine that very soon I could be a grandmother again, something that all mothers wish they could experience over and over?

This experience would be very special as it would make me a very special person, producing Gushungo’s grandchildren with his male child.

For those who are not familiar with current affairs, one of our sons has been linked to a very famous celebrity, Bev Sibanda, well known for her raunchy dancing.

Allegations have been made, but not been denied.

I am not too sure about the second allegations, but it is about an alleged love relationship between our other son and another raunchy dancer, Zoey Sifelani.

Many will remember that in the past I would beat up anybody, including “models” found in the company of my boys as happened in South Africa.

During that regrettable moment when I found the boys with South African “models”, I lost my temper and used a nearby extension cable to crack a few skulls.

But as we all know, experience is the best teacher and I have now resigned myself to accepting all “daughters-in-law” that the boys may bring to me.

As one of my friends was suggesting to me, there would be lots of advantages if the two boys married the two celebrities.

There would be no need to hire entertainers as the two brides-would-be are in the business of dancing, well, sort of.

As for me, I am now resigned to the fact that boys or girls will bring in-laws of their choices and not mine.

I can’t imagine what the Great Gushungo would think though.

So the comrades who helped themselves to multiple farms must have suffered from near heart attacks as the minister responsible for land, Perrance Shiri, told the National Assembly that they should compensate the white former owners for developments done on the land.

A big “sorry” for the chefs who rushed to occupy farms with infrastructure such as farm houses, dams, fowl runs, paddocks and barns.

I have said that the coup plotters are slowly returning the country to the British and very soon many of you will begin to see what it is that I am talking about.

Lizard Ngwena has already evicted some black indigenous farmers from commercial farms which they had liberated from white British foreigners.

Those of you who read newspapers will already be aware that the British were behind the coup that toppled Africa’s great fighter against imperialism, the Great Gushungo.

Now if that is not a return to British rule, I need to be convinced further.

Before my allegations that there was ample evidence that the country was being returned to the British, I was vindicated.

Former Liverpool goalkeeper Bruce Grobbelaar revealed that he would like to return to Zimbabwe and get involved in the politics of the country again.

He has already admitted to his role in the civil war like most adults at the time.

My boys and girls in dark glasses tell me that the “Jungleman” has already spoken to Lizard Ngwena about actively participating in local politics.

Match-fixing on Dead BC

Watching Dead BC and reading The Horrid has become a hilarious experience for some grade six pupils.

All they have to do is identify two blunders per pupil.

The blunder or mistake can either be in the main news bulletin or any programme or any edition of The Horrid newspaper.

One youngster was able to identify 10 mistakes in one programme aired on the one and only national broadcaster.

In the programme sub-titles, it had been written that in a certain community in Zimbabwe, that “match-fixing” was common to ensure some people got married.

Said the youngster to her colleagues, some of whom were laughing out loudly: “I think they meant match-making or arranged marriages.”

That kid could be an effective editor at Dead BC.