He took refuge in Ecuador’s London embassy in 2012 to avoid extradition to Sweden over an alleged sexual assault. 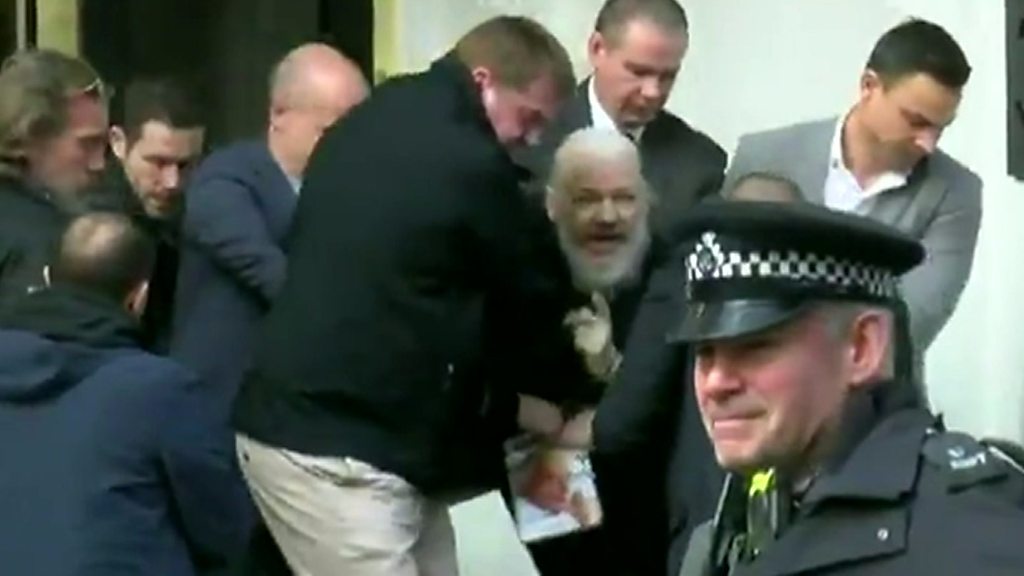 Wikileaks co-founder Julian Assange has been arrested at the Ecuadorian embassy in London.

Mr Assange took refuge in the embassy seven years ago to avoid extradition to Sweden over a sexual assault case that has since been dropped.

The Met Police said he was arrested for failing to surrender to the court and following a US extradition request.

Ecuador’s president said it withdrew his asylum after repeated violations of international conventions.

But Wikileaks tweeted that Ecuador had acted illegally in terminating Mr Assange’s political asylum “in violation of international law”.

Home Secretary Sajid Javid tweeted: “I can confirm Julian Assange is now in police custody and rightly facing justice in the UK.”

Mr Assange, an Australian national, set up Wikileaks in 2006 with the aim of obtaining and publishing confidential documents and images. The organisation hit the headlines four years later when it released footage of US soldiers killing civilians from a helicopter in Iraq.

Former US intelligence analyst Chelsea Manning was arrested in 2010 for disclosing more than 700,000 confidential documents, videos and diplomatic cables to the anti-secrecy website.

She said she only did so to spark debates about foreign policy, but US officials said the leak put lives at risk.

Mr Assange, 47, had been in the Ecuadorean embassy in London since 2012, after seeking asylum there to avoid extradition to Sweden on a rape allegation – which he denied and was later dropped.

But he still faces a lesser charge of skipping bail in 2012 and he says this could lead to an extradition to the US for publishing US secrets on the Wikileaks website.

Scotland Yard said it was invited into the embassy by the ambassador, following the Ecuadorian government’s withdrawal of asylum.

After his arrest for failing to surrender to the court, police said he had been further arrested on behalf of US authorities under an extradition warrant. He is accused in the US of “computer-related offences”, the Home Office said.

Mr Assange was initially taken to a central London police station and is due to appear at Westminster Magistrates’ Court shortly.

Ecuadorean president Lenin Moreno said the country had “reached its limit on the behaviour of Mr Assange” after he intervened in the internal affairs of other states.

“This and other publications have confirmed the world’s suspicion that Mr Assange is still linked to WikiLeaks and therefore involved in interfering in internal affairs of other states.”

Mr Moreno said the British government had confirmed in writing that Mr Assange “would not be extradited to a country where he could face torture or the death penalty”.

This man is a son, a father, a brother. He has won dozens of journalism awards. He’s been nominated for the Nobel Peace Prize every year since 2010. Powerful actors, including CIA, are engaged in a sophisticated effort to dehumanise, delegitimize and imprison him. #ProtectJulianpic.twitter.com/dVBf1EcMa5

It comes a day after Wikileaks said it had uncovered an extensive spying operation against its co-founder at the Ecuadorean embassy.

There has been a long-running dispute between the Ecuadorean authorities and Mr Assange about what he was and was not allowed to do in the embassy.

BBC diplomatic correspondent James Landale said that over the years they have removed his access to the internet and accused him of engaging in political activities – which is not allowed when claiming asylum.

He said: “Precisely what has happened in the embassy is not clear – there has been claim and counter claim.”

Mr Assange will initially face UK legal proceedings but could be extradited to the US over the Wikileaks revelations, he added.

Prime Minister Theresa May told the House of Commons: “This goes to show that in the UK, no one is above the law.”

Foreign Secretary Jeremy Hunt said the arrest was the result of “years of careful diplomacy”.

He said: “We’re not making any judgement about Julian Assange’s innocence or guilt, that is for the courts to decide. But what is not acceptable is for someone to escape facing justice and he has tried to do that for a very long time.”

Press freedom organisation Reporters Without Borders said that the UK should resist extradition, because it would “set a dangerous precedent for journalists, whistleblowers, and other journalistic sources that the US may wish to pursue in the future”.

The actress Pamela Anderson, who has visited the embassy to support Mr Assange, said the arrest was a “vile injustice” that proved he was “right all along” about the threat of extradition.

Australia’s Foreign Minister Marise Payne said he would continue to receive “the usual consular support” and that consular officers will try to visit him.