JUST IN: President returns from China 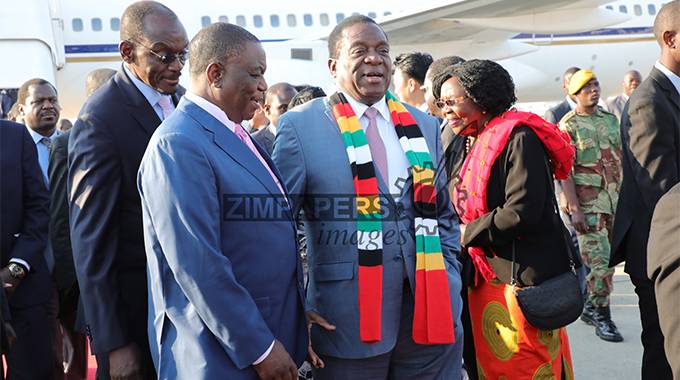 Source: JUST IN: President returns from China | The Herald September 6, 2018

President Mnangagwa speaks to his two deputies VPs Chiwenga and Mohadi shortly after his arrival today. Picture by John Manzongo.

President Mnangagwa has returned to Zimbabwe after a successful trip to China where he attended the 2018 Beijing Forum on China-Africa Cooperation and at the same time managed to sign three significant bilateral agreements with the Chinese Government.

The agreements were signed after a string of high-powered bilaterals with his Chinese counterpart President Xi Jinping. During the course of the five-day visit, the President also attended the 2018 Forum on China-Africa Cooperation (FOCAC).

President Mnangagwa also met a with a number of Chinese companies that want to invest in Zimbabwe, as well as some Zimbabweans living in China.

Notwithstanding the hugely successful bilateral meetings, Zimbabwe stands in good stead to benefit immensely from the $60 billion concessionary loan that was announced by President Xi during FOCAC 2018 as President Mnangagwa has promised to put forward bankable national infrastructure projects.