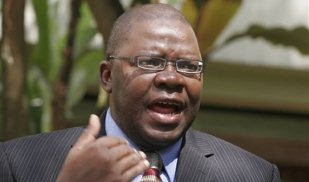 HARARE – Members of the Ninth Parliament were sworn in yesterday with
former Finance minister Tendai Biti painting a gloomy picture of its
prospects of success owing to what he termed a “crisis of legitimacy”.

Speaking to the Daily News soon after taking oath yesterday, Biti insisted
that President Emmerson Mnangagwa lost the July 30 elections to MDC
Alliance leader Nelson Chamisa adding that as long as the two protagonists
do not find each other MPs will not be able to deliver for their
constituencies.

“This is an unfortunate Parliament coming as it does on the back of a
stolen election so unless Mnangagwa accepts the reality that Chamisa is
the legitimate one and that he is the one who has the keys to unlock
economic value in the country, then this Parliament is bound to fail in
its mandate,” Biti who is Harare East MP said.

Biti said while the international community had no confidence in Mnangagwa
and his administration, the MDC Alliance was not interested in a
government of national unity with Zanu PF.

“This is not to say we want an inclusive government, no far from it. We
are opposed to it. What is clear, however, is that we as the MDC simply
have the keys to economic development.

“Mnangagwa must engage Chamisa to resolve the legitimacy issue, the
militarisation of government institutions, the challenges around the
economy with signs showing that we are tethering towards hyperinflation.
Chickens are coming home to roost and we now bear the hallmarks of a
country emerging form a civil war.

“I hope will visit Emmerson so that he talks to Nelson,” he said.

However, contrary to Biti’s assertions Zanu PF MP for Masvingo West Ezra
Chadzamira said the prospects of the ninth legislature’s success were
bright with Mnangagwa emphasising developing the economy at the expense of
politics.

“We have very high hopes that Parliament will be focusing more on issues
that enhance economic development to improve the people’s lives in line
with the message being preached by the president. There is no reason why
we should fail if we follow the leader’s vision,” Chadzamira who is also
the ruling party provincial chairperson for Masvingo said.

Another Zanu PF MP for Shamva North Oscar Gorerino weighed in saying the
new Parliament will provide the panacea to the long running economic
problems bedevilling the country.

“Although I am new in the House, I am confident that what we are going to
do here in the next five years will transform people’s lives and have a
positive impact on their standards of living owing to the trajectory that
the new political dispensation is taking.

The swearing-in ceremony will culminate in the election of Speaker of the
National Assembly, Senate President and their deputies to be held on
Tuesday next week.

After the election of presiding officers next Tuesday, Mnangagwa is
expected by law to officially open the First Session of the Ninth
Parliament providing its legislative agenda.

Of the 350 MPs sworn-in yesterday, 270 were drawn from the National
Assembly while the other 80 are members of the Senate.

The ninth Parliament is a mixed bag of returning members, new faces and
those who had been in the previous Parliament but had left for various
reasons.

The swearing-in process was done in 27 batches of tens to save time owing
to the large number of legislators particularly in the National Assembly.

Newer Post
May and Merkel backing Mnangagwa is bad news for Zimbabwe
Older Post
JUST IN: President returns from China