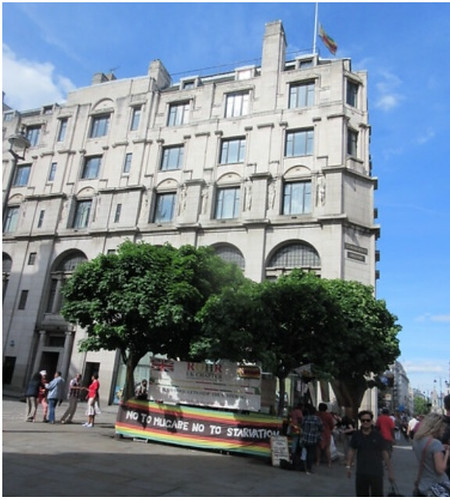 The Zimbabwean government has rejected a petition protesting at the treatment of leading opposition MP Job Sikhala and another MP Godfrey Sithole who have been held in jail with 14 other CCC activists since June awaiting trial. They are accused of inciting violence following skirmishes at the funeral of murdered CCC supporter MoreBlessing Ali.

The petition has been supported by thousands of people including prominent Zimbabweans such as the entrepreneurs Strive Masiyiwa and Mutumwa Mawere, and veteran journalists such as Geoffrey Nyarota and Trevor Ncube as well as award winning author Tsitsi Dangarembga and famous musician Thomas Mapfumo.

The petition accused the government of selective application of the law but the Information, Publicity and Broadcasting Services Secretary Ndabaningi Mangwana said the President would not interfere with the justice system  Leading human rights lawyer Musa Kika said the petitioners were asking the President to end violations of the constitution. ‘We are aware there is judiciary interference. Judges and prosecutors are told what to do and we know that. Our petition is to say, ‘Mr President, this is happening and you should act to end the constitutional violations”’ (see: https://www.newsday.co.zw/theindependent/local-news/article/200000565/mnangagwa-looks-the-other-way-on-job-sikhala-petition).

Former State Security minister Owen Ncube has described the opposition CCC of Nelson Chamisa as the enemy of the ruling party and urged Zanu PF supporters to defend it. He said: ‘It is only Zanu PF which must rule this country not the opposition because liberation fighters sacrificed for this country.’ The Zimbabwe Peace Project has listed Zanu PF as the leading perpetrator of violence in Zimbabwe. It also alleged that village heads were ordered to demand villagers identity documents so they could manipulate the election (see: https://newsday.co.zw/local-news/article/200000552/zanu-pf-declares-war-on-ccc and https://bulawayo24.com/index-id-opinion-sc-columnist-byo-223376.html).

The President of the People’s Progressive Party Timothy Chiguvare says foreign mediators from the AU, the EU or the UN are needed to address the quest of electoral reforms. ‘We cannot have dialogue with the ruling party which has over the years refused to reform. They have ruined this country and they believe they own Zimbabwe’. Chiguvare criticised the government funded Politcal Actors’ Dialogue (POLAD) which he described as ‘the joke of the century’ . . .  ‘It’s just a gang of Zanu PF sympathisers, some of whom never received a single vote but are just there for benefits and nothing else. It’s an embarrassing gathering of looters and chancers.’ (See: https://www.newsday.co.zw/local-news/article/200000623/au-eu-must-intervene-on-zim-crisis.)

The American publication Foreign Policy says 2 US Senate Aides were harassed by suspected security officers on a recent visit to Zimbabwe. They were sitting in an outdoor café in Harare talking to a civil society activist when they were interrupted and forced to flee to the Embassy pursued by a phalanx of cars. The Chairman of  the Senate Foreign Relations Committee, Senator Robert Menendez, has urged President Biden to step up US attention to the ‘dire’ political atmosphere in Zimbabwe and boost support for embattled civil society organisations and pro-democracy activists (see: https://foreignpolicy.com/2022/09/16/zimbabwe-human-rights-senate-aides-harassed-chased-biden-africa/).