Lost hope, uncertainty and despair as youths search for opportunities 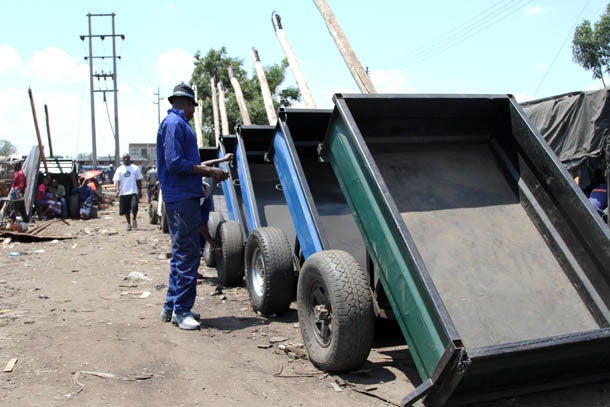 It is a sunny January afternoon in the low-class high- density suburb of Highfield, down at Gazaland, a hub of cottage industry, beerhalls, garages and backyard pawnshops.

Here is where men, mostly clad in overalls, toil all day — their bodies dirty and sticky from sweat — making anything from wheelbarrows to scotch carts.
Every trade is represented here; be it car-breaking, car repairs, scrap metal dealership, coach-building, outdoor catering, second-hand clothes trade, metal craftsmanship, woodwork, or sex work.

There’s a going joke that goes: “Everything, including used aircraft wheels, can be found on sale at Gazaland!”

On the outward, Gazaland looks dull, dusty, smoky and somewhat ugly. Its old colonial era buildings, which are the majority, now mostly serve as beerhalls, general dealer and motor spare parts shops, and garages, and they blend well with the vast tracts of outdoor workshops where scrap metal dealers, car breakers, metal workers and woodworkers ply their trade.

From an aerial drone’s viewpoint, the place looks like one dark brown scar in the middle of densely housed Highfield.

Perhaps, for all its ugliness, the beauty of Gazaland is in the hard work of the men and women who sweat it out in production, where each trade is vital to the other.

Gazaland is the story of a community that sustains itself in the hard times the country is going through.

For the unemployed and hopeless youths, it is more like a refuge.

It is a place where 25-year-old *Justin — like many in his situation — can find anything — anything to do.

After graduating with a Sociology degree, he could not find a job, just as the millions of young people churned out by universities in Zimbabwe, Gazaland, where everything is informal, has given him a home, and today, he works as a car-breaker.

He spends his days with colleagues, many of whom are older than him and have various backgrounds that resulted in them ending up at Gazaland.

His job is never easy. It involves being part of a team that contributes to buy a car that is due to be broken, actively looking for buyers of various parts, sharing proceeds, and keeping money for fresh purchases.

It is a gamble and hustle and they sometimes run into losses if they buy a car whose parts are not on high demand. But as Justin says, “at least we can survive and be able to buy clothes and food”.

As each day ends, Justin and many other labourers at Gazaland converge in local bars to quench their thirst for booze and digest plans for tomorrow and beyond.

Tonight, another warm, dry night, Justin is with his friend and agemate, Lovemore, an iron fabricator also stationed at Gazaland, and they are in one of the dingy outlets and as they chug down some opaque beer, their conversations are about their dreams and ambitions.

“I am not sure, but I am hopeful that one day I will be out of this place,” Justin says, “but for now, I am a car-breaker and tomorrow I might be trading in aluminium scrap, depending on what gives me a few dollars,” he says, lighting a cigarette and nodding to a Thomas Mapfumo song that is playing in the bar.

The song, Rufaro, is a track of hope and despair, the kind of music that you find playing in spots at Gazaland, where there are people who are in search for a brighter tomorrow and yet under the current regime, the future never becomes quite clear.

In Rufaro, Mapfumo sings, “Rufaro Mudiwa, uchauya rinhi?…tichafara rinhi, tichagarika rinhi, Tamirira kare, tamirira taneta…” [Rufaro my love, when are you coming . . . when will we enjoy life? We have been waiting and waiting and we are tired now . . .] and Justin sings along like the track is speaking to his heart.

A former bank employee, Lovemore was forced to abandon his studies in Banking and Finance and now uses his O’Level Metalwork experience to make various items such as weeding hoes and garden rakes, among others.

“I dropped out of school beginning of last year and I began this work here with the hope that I would be able to raise funds and go back to school, but am sure you can see how things are getting worse every day,” he says as he takes a long swig of the opaque beer, now popularly known as “chiMnangagwa”. This is a blend of opaque beer, packed in a brown plastic container, slightly smaller than the regular Chibuku Super and colloquially named chiMnangagwa in apparent mockery of President Mnangagwa’s disastrous economic policies which have wreaked havoc on people’s lives.

“It is wasted years that we will never recover from. I am afraid that Gazaland is where my ambition will die, and so far there is nothing I can do about it,” a distraught Lovemore says.

Justin and Lovemore are not alone in this.

Theirs is a story of many a young people in Zimbabwe, who have been caught up in the country’s volatile economic winds, leaving them enduring what seems like an endless sad movie.

“It is like being pulled backwards each day,” says Shorai, a 21-year-old woman who sells in a car spare parts shop.

“I would have gone to college last year, but things were not so good so I decided to look for a job, hoping things would have been better by the end of 2019. I was basing on what government was telling us. But right now, there is no hope. I am stuck.”

“Whenever I look at my O’Level results slip, I think of the years I wasted repeating English and Maths subjects so that I would be acceptable in college, only to end up being a salesperson,” she said.

As the country’s economy continues to dive downwards, and government appears to have run out of anything to inspire hope and confidence, young people remain haunted and restless.

The situation fits perfectly to the notion that peace is not merely the absence of war. The economic losses and social upheavals Zimbabweans have suffered over the years make the country anything, but a peaceful one.

Blessing Vava, regional co-ordinator for Crisis in Zimbabwe Coalition (CZIC), whose organisation works towards building democracy and good governance, believes the plight of poor Zimbabweans cannot continue to be ignored.

“The sad story of Zimbabweans’ sense of loss and broken dreams is right in the poor communities, where graduates are doing anything to just go by, where people have lost entire savings more than twice in a decade.

“It is not in Borrowdale or Mandara, where the few elite who can still afford bacon, make decisions and rationalise and justify the intolerable life ordinary people endure daily,” said Vava.

“The story of Zimbabwe can never be complete if it is about political leaders sitting down in some air-conditioned hotel to discuss the country’s future, it is also significantly about the absence of a healing and reconciliation process for the political, economic and social rights violations that have happened over the years.”

According to Vava, “it will take huge political will for those with authority to forgo their endless politicking and give in to a genuine and broad based healing, reconciliation and truth-telling process that will feed into a change in political culture and ease the long-standing polarisation and usher in confidence that will help the economy to get the much-needed boost.”

“Unfortunately most of these economic challenges are man-made. Zimbabweans are generally hardworking and resilient, especially the women, but the economic meltdown and uncertainty has forced many to abandon their skilled jobs for anything that puts food on the table. Elderly women who have worked in the past and retired are getting pittances as pension income. All that they worked for over the years continues to be eroded by inflation forcing many to live on one meal per day.”

Executive director of the Zimbabwe Human Rights NGO Forum, Blessing Gorejena, said there was a close link between economic misgovernance and its impact on all human rights.

“It impacts on people’s rights and undermines their dignity, so to have a peace and reconciliation conversation without including the impact of the economic haemorrhage will only take us back to previous attempts which were not successful. When we talk of accountability, and a never-again situation, we cannot to afford to ignore the impact of the economic haemorrhage, especially considering that this is a man-made problem. When we are talking of a holistic approach, the economic impact cannot be ignored.”

“Without a social contract that binds the right to work, the right to an adequate standard of living, including food, clothing, and housing, the right to physical and mental health, the right to social security, the right to a healthy environment, and the right to education, Zimbabwe is going nowhere. We need an all-inclusive approach to repairing the social damage that has happened to our country which has affected not just women, but the general population and has left many living in abject poverty. There is need for closure.”

A window of hope for Zimbabwe to deal with the political, economic and social trauma is provided by the Constitution’s provision for the setting up of the National Peace and Reconciliation Commission (NPRC).

This is, however, still fraught with what appears to be government’s lack of political will to enable the NPRC to fully carry out its mandate.

The Zimbabwe Peace Project (ZPP) is one of the non-governmental entities that have been documenting violations and engaging in initiatives to promote peace building in Zimbabwe, and has actively pushed for government to make the NPRC functional.

ZPP executive director Jestina Mukoko, however, is concerned that the NPRC “is not adequately funded and is thinly spread” to fully discharge its mandate.

“When the NPRC began its provincial consultations, they raised hopes of those who seek to see a proper and genuine healing and reconciliation, but so far there has not been feedback and this is a cause for concern,” said Mukoko.

Mukoko added that the involvement of the NPRC in the Political Actors Dialogue (Polad) may “dilute the mandate of the NPRC”.

Retired Justice Sello Nare, the NPRC chair, has been part of meetings of Polad, which comprises of President Mnangagwa and more than a dozen minority political actors who contested for the presidency in the 2018 elections and has been touted as an attempt to create a shortcut to genuine dialogue.

Added Mukoko: “We are also worried about the recurrence of violations and this does not bode well because it means we are still yet to be in an environment where proper healing and reconciliation processes have begun.”

On how the NPRC can build onto the current efforts by various organisations, Mukoko said: “ZPP and many other rights organisations have over the past years, documented violations and the NPRC can make use of such vital information.”

As another sun sets on Gazaland, it was clear that Justin and many other young Zimbabweans could only expect the worst and hope for the best in a country where uncertainty has become a ghost that continues to haunt progress.