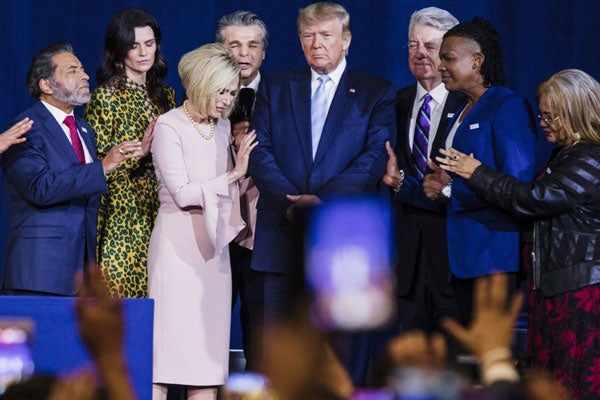 Reading US newspapers and listening to television media will give one a false impression that US President Donald Trump is unpopular and that all his actions are ultra-vires. Nothing can be further from the truth.

The Democratic Party and the media are totally against Trump, and have plotted to remove him from power by any means possible. Whatever he does, they will oppose, even if yesterday, they were in favour of that policy.

For the sake of brevity, I will use the example of Connecticut Senator Richard Blumenthal, a Hillary Clintonite operative.

On April 9, 2018 Blumenthal condemned Trump for not taking action in Syria to protect Syrians and Kurds from Jihadist terrorists. “Military response ought to be considered. It must be robust and unmistakable in holding accountable a war criminal, truly a war criminal that should be prosecuted… but also his Russian and Iranian enablers.”

Iranian General Qassem Soleimani was the coordinator of the resistance that sought to rid the Middle East of US influence. In doing so, he has been blamed for the death of 600 US servicemen in Lebanon and in Iraq. General Stanley McChrystal writes in one of his memoirs that Soleimani was in the cross hairs of US forces and he was conflicted as to whether he should target him or not.

June 2, 2020: Blumenthal once again blamed Trump for “horror and shame” for refusing to take action in defence of US allies in the Middle East.

January 2, 2020: Blumenthal once again rides his high horse of moral blame. Trump must be impeached. Why? Trump, he confesses, has used the “authorisation” given to him by Congress to murder Soleimani.

So what is Blumenthal’s complaint? “This step can bring the most consequential confrontation in decades.”

Jonathan Alter, a progressive independent journalist, has given us the answer. Blumenthal finds himself caught between his own forked tongue talk, and the fact that Trump’s decision has the general approval of the US population.

More worse (Black English) Americans are being shown on their daily television how Soleimani and his convoy was targeted by US hell-fire missiles, revealing US awesome power.

So what are we to think about all this hoopla?

It is amazing how politicians at home (in the US) and abroad have underestimated Trump from the beginning.

Soleimani, by giving a press conference and cursing out Trump, may have drawn attention to himself. “Come, we are waiting for you. We are the men on the scene… You know that a war will mean the loss of all your capabilities. You may start a war, but we will be the ones to determine its end.”

With an unpredictable mad man like Trump in the White House, who was elected on a wave of “Make America Great Again,” the chips are against Iran.

‘Pusy cat’ leaders like Obama and George W Bush, who, because of their much learning, entertained doubts about the use of US power, are behind us.

The result was a giant super nation whose leaders were uncertain of their own moral compass.

At a conference of Southeastern Asiatic countries, the Philippine president, angered by Obama’s moral posturing on human rights (and gay issues), cursed him out.

“I will not be lectured to by that son of a prostitute,” the Philippine president said. Obama’s mother had more than one husband.

A great country cannot allow its leaders to be treated in that manner for whatever reason without loud consequences following as morning follows night.

Soleimani can be credited with some successes in weakening US hegemony in the Middle East. His success in Lebanon and Syria has left these countries virtually unlivable.

The risk for Iran!

The Iranians, as is mandated by their fealty to Allah, must revenge the death of a martyr. If they take a small action now to harm US citizens in the Middle East, they will face the wrath of a madman in Trump.

A successful sortie on some US enclave may loosen Trump’s support at home, but having been placed in a no-win situation, and fearing loss of his position in the coming election in November, 2020, he can unleash an even greater hell-fire on Iran.

We have an inkling of Trump’s thought process in the following statements. In 2018, Trump responded to Soleimani’s cursing as follows in a tweet:
“Never, ever threaten the United States again or you will suffer consequences the likes of which few throughout history have ever suffered.”

Sean Hannity, a friend of Trump, may have an idea of Trump’s inner thoughts. He says that Iran’s oil industry pivots around three oil refineries. The issue here is whether the US army, if asked to destroy those facilities, will refuse, as Democrats are urging them to do.

House Speaker Nancy Pelosi is on record as saying that she was not consulted prior to Soleimani’s murder.

Trump would have been foolish to inform Democrats. They hate Trump more than they hated Soleimani.

Trump’s support is solidifying among the Jewish-Israeli lobby. The destruction of Iran’s power in the Middle East has been the subject for the last 20 years of Israel’s Prime Minister, Benjamin Netanyahu. As we went to press,
7 000 Evangelicals for Trump were meeting at King Jesus rally in Florida.

Evangelicals see the present Iranian leader Ayatollah Khamenei as playing the role of the Persian Vizier, Herman the Agagite. Herman persuaded King Aherseurus (485 BC) to take note of his obedient subjects as they bowed down at a certain time of day in his honour.

Failure by Jews to take part would lead to their destruction.

US Evangelicals believe that unless and until Iran’s wings are clipped, (Persia) the safety of Israel cannot be guaranteed.

Trump, as the Evangelicals view him, is a pagan king (Ahersuerus) placed at the crossroads of history to save Israel.

If therefore the Iranians take a precipitate step to revenge the death of the martyr Soleimani, they risk a disproportionate response from Trump. If on the other hand, they delay their hand until November, Trump may be re-elected and they face four more years of unpredictability.

Democrats are in an uncomfortable position of appearing to support the scourge of US presence in the Middle East and the spineless policy of making excuses for Third World tyrants.

Trump has responded to a call by the Iraqi parliament for US forces to leave by demanding re-imbursement for expenses incurred for invading their country.

Non-historians do not know that France has been collecting 10% of all revenues from their African colonies as re-imbursement for colonial development.