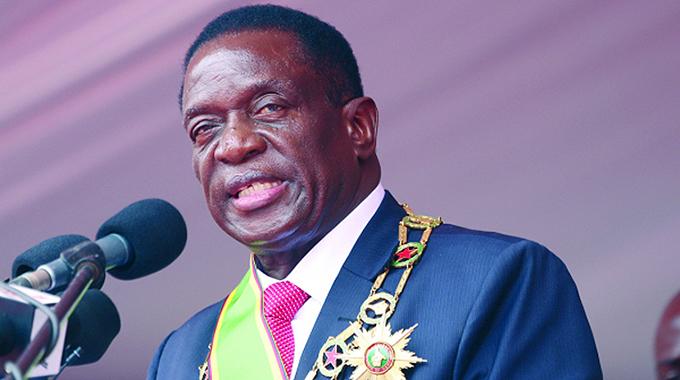 Tendai Mugabe Senior Reporter
THE majority of Zimbabweans are expressing confidence in President Mnangagwa’s administration and are becoming more sympathetic to the ruling Zanu-PF, just two weeks before general elections, a survey has established.

A survey conducted by a Pan African organisation, Leaders for Africa Network, on election credibility last month showed that 49 percent of the survey sample size of 2 500 said they decided to register to vote in the July 30 elections to maintain the status quo, while 23 percent said they wanted to change the current administration.

Discerning from these statistics, Leaders for Africa Network concluded that: “Basing on the above responses, there seems to be wide public sympathy towards the ruling party since 49 percent of the respondents have stated that they will vote to preserve the status quo, while 23 percent are determined to change it.”

Analysts who spoke to The Herald said the findings of the Leaders for Africa Network were in sync with results of several other surveys that are pointing to President Mnangagwa’s crushing victory in the coming polls.

As such, they argued that would Zanu-PF and President Mnangagwa’s victory on July 30 should not come as a surprise.

“The findings of this survey are not surprising as they only help to cement the only known public view that was proven by other researchers before,” said a Harare based analysts who refused to be named.

“It is public knowledge that since his inauguration, the President through concerted hard work has managed to win the hearts of many Zimbabweans who had lost hope for a better country. He has managed to restore the people’s confidence and the results of these surveys are only helping to confirm that position.”

A survey by Trends and Insights for Africa (TIFA) recently said if elections were to be held today, President Mnangagwa would garner 68,5 percent of the votes, while Mr Chamisa of the MDC-Alliance would get 19,5 percent, National People’s party (NPP) leader Dr Joice Mujuru 2 percent, and others 0,5 percent of the vote.

TIFA is a full market research company offering market, social and sports research and is headquartered in Nairobi, Kenya.

The survey said 8 percent of the study population was undecided on whom they would back with the majority, 87 percent, showing strong leaning towards President Mnangagwa and 13 percent to Mr Chamisa.

A Kenyan research network, the Pan African Forum Limited, released a survey whose results forecast President Mnangagwa would win with 70 percent of the vote against Mr Chamisa’s 24 percent.

In a hypothetical presidential election held at the time of its survey (April to May 2018) but released last month, the Pan African research network, Afrobarometer, gave Zanu-PF 42 percent of the vote against MDC-T (combined Chamisa party and Alliance)’s 31 percent.

Professor Chan, who teaches African Political Thought at the SOAS University in London, is of the view that MDC Alliance is not positioned for victory on July 30.

He argued that the party’s founder Mr Morgan Tsvangirai died before addressing the succession issue in his party resulting in deep squabbles on who the current leader was.