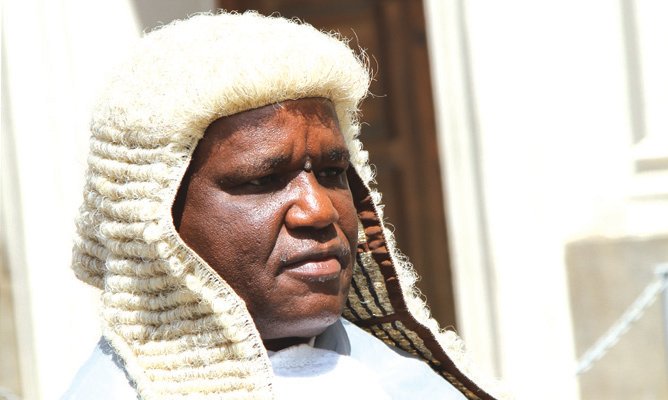 DETAILS have emerged of a controversial meeting between MDC deputy president Elias Mudzuri and secretary-general Douglas Mwonzora as well as Chief Justice (CJ) Luke Malaba, which has seen daggers being drawn against the two politicians.

Mudzuri and Mwonzora met Malaba and his deputy Justice Elizabeth Gwaunza at the Constitutional Court (ConCourt) in Harare where the two are accused by pro-party leader Nelson Chamisa supporters of tendering an apology to the chief justice.

This was after MDC Alliance MPs embarrassed Malaba during the swearing-in of new MPs in September.

According to minutes of the meeting obtained by The Standard, the two wanted to mend relations between the opposition party and the judiciary following the acrimonious election dispute.

“The purpose of the meeting was to discuss the relationship between the judiciary as an arm of the state and political parties in view of recent developments and various statements on social media,” reads part of the minutes in our possession.

“It was emphasised that the purpose of the meeting was not to discuss any personalities or judgements made by the Constitutional Court.

“Hon Mudzuri thanked the Chief Justice for the meeting. He introduced the secretary-general Hon Mwonzora.

“He stated that the MDC has specific positions regarding the separation of powers, the judiciary, the Constitutional Court as well as the officers within the judiciary in particular the Chief Justice himself which it wanted to make clear to the CJ and his team. He called upon Hon Mwonzora to outline these.”

Mwonzora told the meeting that the MDC respected the doctrine of separation of powers between the executive, judiciary and the legislature, but was against the domination of one arm of the state over the others.

The two said their party had a right to criticise the behaviour of any arm of the state including the judiciary.

“That criticism should not be regarded as disrespect or contempt of that arm, but part of positive criticism, which is the cornerstone of any democratic system,” added the minutes.

They said the MDC would play its role both within Parliament and outside to make sure that the judiciary is not undermined and its independence preserved.

Mwonzora told the meeting that during the constitution-making process, the MDC was instrumental in the establishment of the ConCourt.

During the discussions, concern was raised over a number of articles on social media “maligning” the judiciary and the claims that the MDC was behind the messages.

In response, Mwonzora said the party only communicates through the office of the spokesperson and not social media.

“On the recent heckling of the Chief Justice by members of Parliament, Hon Mudzuri advised the meeting that this had not been planned by the party and appeared to have been a spontaneous reaction by the MPs to the Constitutional Court ruling in the presidential election petition,” the minutes added.

“However, the petition was clearly not a subject matter for discussion in the meeting as previously stated.

“The MDC assured the Chief Justice that the reaction of the MPs was not directed at him personally.

“He regretted it that an impression had been created in the state media that the reaction had been directed to him personally.

“He reiterated that the party and its president retained a lot of respect for the person of the Chief Justice and would maintain the distinction between the judicial officers, including the Chief Justice, and the decisions that they make.”

Malaba “thanked the MDC for the courtesy and respect that they had shown to the judiciary, the Constitutional Court as an institution and his person through this engagement”.

However, Mwonzora and Mudzuri’s opponents in the party are now using the meeting to push for their ouster.

The two, who have been linked to a group plotting to oust Chamisa, refused to comment on the matter.