Some of the 2 200 houses under construction at KockMallock Estate in Norton.

The Second Republic’s thrust to eradicate poverty and protect citizens against scammers, through provision of affordable housing, is on course, as a massive 2 200 housing project takes shape in Norton.

Government is ticking all the right boxes towards an upper middle income status as enshrined in national Vision 2030, and envisioned in the recently launched Zimbabwe National Human Settlements Policy.

The human settlements policy is aimed at informing the implementation of relevant facets of Agenda 2030’s Sustainable Development Goals, Vision 2030 and national and international pliability frameworks.

This will in turn massively contribute to overall economic growth in line with National Development Strategy 1 (NDS 1) — a five-year economic blueprint that runs from 2021-2025 — launched by President Mnangagwa in November last year.

A successor to the Transitional Stabilisation Programme (TSP), the NDS 1, is key to the achievement of Vision 2030, and seeks to streamline gender, youth, women and other vulnerable groups, hence creating equal opportunities for all citizens in an economically stable environment.

High rise flats, as envisaged in the policy, are the way to go, although in some cases they may be costly as compared to building low-cost 50-square-metre houses on 200 or 250 square metre lots, considered socially acceptable.

To that end, the Second Republic under the stewardship of President Mnangagwa has set a target of 220 000 houses and flats by 2025, with hundreds of houses having been completed in Norton. Thousands of other houses and flats are at different stages of construction across the country.

Last Thursday, the President commissioned the Marimba Flats Project, and launched the Zimbabwe National Human Settlements Policy to expedite the creation of a conducive environment for all stakeholders to participate in human settlements development, for ease of housing delivery.

The policy will, among other issues, provide for disaster risk assessments, environmental impact mitigation, and climate change implications into rural and urban settlement planning, development and management.

The President said his administration will deliver on the provision of accommodation.

“My Government is accelerating the provision of houses and social amenities to all sections of society, including the health sector. Numerous new housing projects and others, which had stalled, are being completed across the country.

“Success of the programme is being further accelerated through collaboration and coordinated efforts from various stakeholders,” he said.

To curb settlement stretch, 40 percent of land earmarked for human settlement will be set aside for the construction of high-rise flats and buildings. 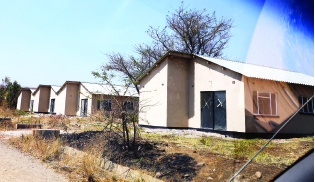 Part of the completed housing units.

Recognising that housing is a basic human right, the settlements policy opens up opportunities for Public-Private Partnerships (PPPs) in the construction sector.

Shelter is considered one of the effective indicators of the extent to which poverty has been eradicated in any country.

Hence, companies, banks and local authorities should complement Government efforts in the provision of affordable housing, as a progressive way of eradicating poverty and protecting citizens against scammers-induced heartaches.

Shelter Afrique, a Pan-African bank, has come on board with a US$65 million facility to fund housing through building societies and the Urban Development Corporation (Udcorp). Under the partnership, hundreds of the 2 200 houses under construction in KockMallock Estate in Norton, are now complete.

National Housing and Social Amenities Minister Daniel Garwe said the approach adopted in the policy was to rope in all stakeholders in human settlements growth.

“This approach was taken after noting deficiencies in the National Housing Policy of 2012. Government then embarked on consultations, and solicited opinions with a view to address these shortcomings.

“The vision of the policy is ‘towards well planned and governed sustainable human settlements’. It also explains alternative housing finance models. The policy shall be the cornerstone of the housing delivery sector under the National Development Strategy 1, pursuant to Vision 2030,” said Minister Garwe.

He said the Government is taking a deliberate move to ensure sustainable provision of housing and social amenities in both rural and urban settlements, in consultation with relevant stakeholders, as a way of addressing existing disparities.

The policy also highlights adverse impacts of climate change “in view of the adoption and adaptation of resilient building technologies and inclination towards green energy.” There is emphasis on the need to protect wetlands.

“Urban regeneration programmes and projects shall be informed by the need to densify settlements regularisation; and sanitisation of informal settlements shall be employed to rectify past mistakes through building back better,” Minister Garwe said.

On arbitrary evictions, the Government shall be conscious of constitutional provisions, and where people have settled on undesignated sites, like road servitudes, land earmarked for social amenities, and any other designated use, they will be relocated to proper places.