Community volunteers get bicycles from NAC

Source: Community volunteers get bicycles from NAC | The Herald

The National AIDS Council (NAC) has unveiled 130 bicycles worth $3,7 million for use by community volunteers in Mashonaland Central to capacitate them in the response to HIV/AIDS and reaching all hard to reach areas.

This comes as the Government set an agenda of leaving no one and no place behind as the country moves towards attaining an upper middle income economy by 2030.

Mashonaland Central has about 1 000 community health volunteers some of whom travel long distances to create demand for health services, raise awareness and capacitate communities to have information to prevent themselves from pandemics.

Minister of State for Provincial Affairs and Devolution Senator Monica Mavhunga said Government was impressed that NAC was taking the National AIDS Trust Fund back to the community through implementation of community-based and peer led HIV prevention models.

“I am informed that the bulk of funds from the National AIDS Trust Fund are channeled towards the HIV prevention drive,” she said.

“investment in community peer-led HIV prevention interventions is now at the heart of HIV/AIDS programming in Zimbabwe, as NAC coordinates the multi-sectoral approach towards eliminating HIV by 2030.

“This peer led approach is in line with Zimbabwe National AIDS Strategic Plan 2021 to 2025 which states that health communication is more effective if it involves dialogue and problem solving skills provided through participatory or empowering approaches.”

Senator Mavhunga said the peer-led approach was in line with the National Development Strategy 1 which focuses on capacitating communities to take the lead in pursuit of their development desires.

She said it was necessary to provide community volunteers with necessary tools to do their work properly which will result in increased service delivery and improved quality of life for everyone in the province. 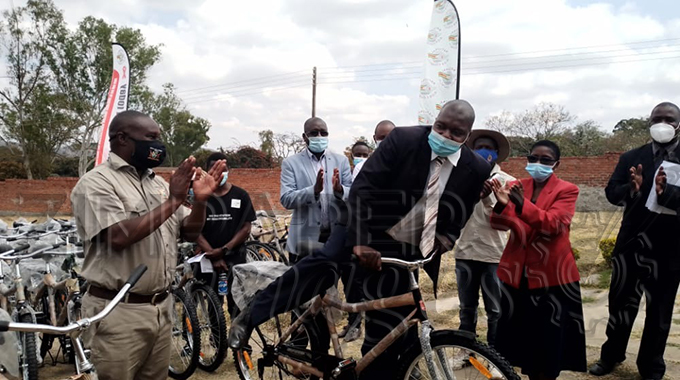 NAC provincial manager Mr Edgar Muzulu said they invested $30 million towards the provision of school related subsidies for 2 000 learners in the province.

He said community volunteers were foot soldiers in the response to HIV/AIDS and other pandemics like COVID-19.

“The National AIDS Trust Fund is a domestic funding basket initiated by the Government to finance the response to HIV/AIDS,” he said.

“Mash Central is at number four in the country with a prevalence rate of 13 percent. Factors driving the pandemic in the province include multiple concurrent partners, social and religious practices that lead to vulnerability and expose young girls and women.”

“This is all hinged on the work of community volunteers who create demand for health services, raise awareness and capacitate communities to have information to prevent themselves from pandemics,” he said
More bicycles will be availed soon to the volunteers in Mashonaland Central.