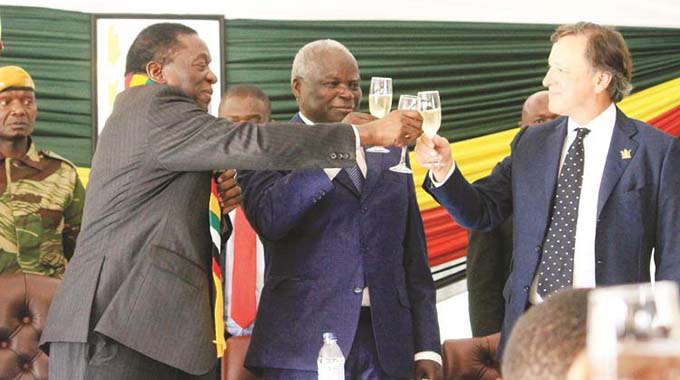 Farirai Machivenyika  and Nduduzo Tshuma in Beitbridge
President Mnangagwa yesterday made an unscheduled address to thousands of zanu-pf supporters gathered at Dulivhadzimu Stadium after commissioning a $241 million refurbishment and expansion of Beitbridge Border Post.

Two weeks ago, another huge crowd gathered at the Colliery Stadium in Hwange waiting to be addressed after the President officiated at the laying of the foundation stone for the $1,5 billion expansion of Hwange Thermal Power Station.

The President however, failed to address the Hwange crowd because of a tight schedule.

In his address yesterday, the President said he was overwhelmed by the huge turnout by Beitbridge residents, especially when there was another recent rally in the district addressed by Vice President Constantino Chiwenga.

“I am pleased by the high turnout here because I had not planned to address a rally today as you know Vice President Chiwenga had another rally nearby. But when I heard about the huge turnout here, I said as a servant leader I can’t just go without coming here to greet and talk to you,” he said.

“I hope on July 30 you will turn out in your numbers to vote for your President, MPs and councillors.”

President Mnangagwa hailed Matabeleland South Province for voting overwhelmingly for zanu-pf in the 2013 elections when the party swept all 13 National Assembly seats, challenging them to do the same on July   30.

“The party is very strong in Matabeleland South; it is a pillar of the party and I urge you to remain like that,” he said to the cheering crowds.

“We have opened up democratic space in this country and there are many political parties, 133 of them, so that the game becomes enjoyable but we don’t want any violence. Why should we be worried by these small parties with little following?”

The President said he was a servant leader who followed the aspirations of the people adding that all his lieutenants should work to fulfill people’s needs.

The President said Government was working on the devolution of power so that provinces take an active role in their development.

“Devolution means that some governing powers should be cascaded down to the provinces. We are going to implement the principle of devolutions so that each province looks at the priorities of that province and ensure the resources of that province grow, modernise and industrialise that province with its God-given resources.

“We shall need young people, young man and women who are committed to use their knowledge and skills to develop their communities where they come from. We as Central Government should give you that empowerment,” he said.

“We must not have a situation where some provinces feel marginalized. On the contrary, Harare must be marginalized by the provinces because as a unitary State the provinces are the cogs, are the pillars which constitute the united Republic of Zimbabwe but each pillar must stand up and develop itself.

“We must have local leadership which is developmental. Provincial ministers should ensure the development of their areas or they would be fired. We want projects across the board. For youths who want to engage in mining we have a $100 million facility for artisanal miners and you should approach the Ministry of Mines for assistance. Currently we are at 24-26 tonnes of production in the country.”

The President was then presented with Parliamentary and local authority candidates that will represent the party in the July 30 elections among them Cdes Albert Miles Nguluvhe and Tambudzani Mohadi.

Giving a vote of thanks, Zanu-PF secretary for information and publicity Cde Simon Khaya Moyo called on Matabeleland South to rally behind President Mnangagwa and the party in the coming polls.

“From today onwards, we are not resting. Let us campaign vigorously and convince the people to back President Mnangagwa and zanu-pf,” he said.