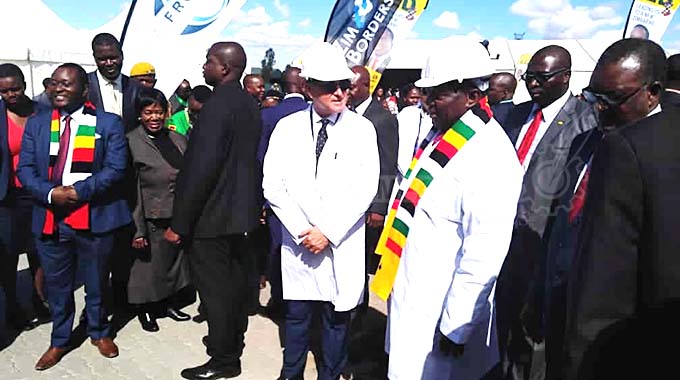 Nduduzo Tshuma in Beitbridge
President Mnangagwa yesterday commissioned the $241 million upgrading and modernisation project at Beitbridge Border Post that will see its transformation into a robust, efficient economic enabler of trade, commerce and tourism.

Speaking at the ceremony, President Mnangagwa said due to its strategic location, the entry point opens up the country to the rest of the world as one of the busiest inland ports in Sub Saharan Africa and a strategic entry into the north-south corridor.

The President said the upgrading and modernisation of the border post along with similar projects throughout the country represented Government’s resolve to modernise infrastructure towards the achievement of a middle-income economy by 2030.

“This event indeed signals a new beginning, a new Zimbabwe full of hope and immense possibilities. A Zimbabwe open to the region and open to the world, ready to play its part in facilitating regional and continental integration and industrialisation,” said President Mnangagwa.

He said the Government prioritised the refurbishment and modernisation of Beitbridge Border Post, which has for a long time required a facelift and improved service delivery, as it handles the bulk of Zimbabwe’s imports and exports and generate a lot of revenue.

President Mnangagwa revealed that an inter-ministerial committee had been set up to oversee the project and that Zimborders, a consortium of local and international investors, was awarded the tender after a rigorous selection process.

He said the comprehensive works under the project would be undertaken on a build, operate and transfer (BOT) model.

“I am optimistic that Zimborders will meet the contract specifications which will involve the refurbishment of the road network to and from the border post, separation of traffic inside the border area, construction of passenger, freight and bus terminals, construction of a commercial centre and staff accommodation, construction of a weigh ridge, upgrading of communication, security and lighting systems as well as the renovation of water and sewer reticulation facilities for Beitbridge Town, among other aspects,” said President Mnangagwa.

“Over and above the physical infrastructure, this project will also see an Integrated Border Management Information System which will smoothen the flow and coordination of operations among all border agencies.”

“On completion of the modernisation project, the border post is anticipated to have the capacity to handle about three times the current passenger and traffic flow. This development signifies exciting times ahead for this border as it is part of the Greater Beitbridge Master Plan which entails the construction of an international airport and industrial parks to complement the envisaged Special Economic Zone status to Beitbridge Town.”

President Mnangagwa said the modernisation of Beitbridge Border Post would be complemented by the construction of the Beitbridge-Chirundu and the Beitbridge-Victoria Falls highways which are set to commence soon.

He said the developments would enable the border post to be more competitive by becoming the shortest and most efficient international gateway through which north bound travellers, goods and services can pass.

President Mnangagwa said the importance of the modernisation of the border post could not be over-emphasised, especially in view of the negative impact of bottlenecks and corruption to the convenience of travellers, trade and tourism as well as revenue into the national fiscus.

“We must thus re-envigorate our systems and change our work ethic to win back the confidence of transit clients, passengers and hauliers alike. Equally important is the need for increased coordination between stakeholders so that clients are not subjected to numerous searches by different entities with duplicated roles or subjected to undue delays as means to solicit bribes.

“I direct all men and women within out border control institutions to stop all forms of corruption and chicanery. Perpetrators will face the full wrath of the law. Please stand warned,” said President Mnangagwa.

“In the same vein, touts and conmen and others who loiter around the border post area for various illegal reasons should stand warned. We are determined to ensure that our border posts are hassle free, safe and secure.”

Preisident Mnangagwa said the modernisation and upgrading of infrastructure in the country was testimony of his Government’s boldness, decisiveness and determination in the timely implementation of projects, ease of doing business and improvement of service delivery.

He called on Zimborders to carry out the project with diligence and high quality workmanship in congruence with the total project value and international standards.

Speaking at the same event, the Minister of Transport and Infrastructure Development Dr Joram Gumbo said the project was long overdue and would address a lot of challenges that had over the years frustrated travellers and revenue inflows.

ZimBorder chairman Mr Glynn Cohen said modernisation of the border post would go a long way in ensuring the ease of doing business in line with President Mnangagwa’s “Zimbabwe is Open for Business” mantra.