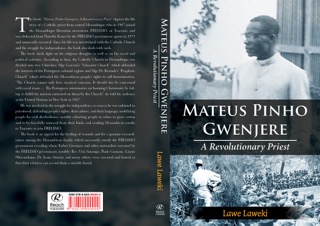 Although 1992 a General Peace Agreement was signed in Rome between Frelimo and Renamo, the internal wars were continuing. In August 2019 a new agreement „Paz definitiva“ was signed in Maputo. The question is why national reconciliation is still not yet fully accepted. 44 years after the independence of Mozambique and so many innocent victims of the civil war, who are the far-sighted and courageous political and religous leaders working for forgiveness rather than seeking retribution?

In any conflict-ridden country, there are hardliners clinging to or campaigning for political power. There are even those in charge of different religions who claim for themselves exclusive righteous-ness, thus refusing to admit past errors and not recognizineg how the past has affected the nation. „For any country to heal, it firstly has to begin by admitting that it is wounded“ says in his preface Fr Michael Lapsley from the Institue for Healing of Memories in Cape Town, SA.

Now in Mozambique, one month ahead of pope Francis’ visit, two publications and their presentations are spelling out and asking very relevant questions. Both books are concerned with ‘The making of politics in Central Mozambique 1940-1986’. This is the title of the second more  analytical one by Eric Morier-Genoud, an academic teaching history at the University of Belfast. The first one about ‘Mateus Pinho Gwenjere, a Revolutionary Priest’ is written by Lawe Laweki, a living witness, who was himself directly involved in the conflicts.

Laweki is the pseudonym assumed in exile in Kenya by Joao Baptista Truzâo, who like Mateus Gwenjere, after the seminary in Zobue, joined the liberation movement in Tanzania 1967 and had military training, but became alienated, fled first to Kenya and then to India, studied at the Poona University and finally returned to Maputo after having worked 10 years at the US-Embassy in Mbabane. Now, with the general willingness for reconciliation, dares to publish his witness, with differing aspects from the former Liberation Front’s leadership. The author confesses how he had felt encouraged by one of the Sena tales, published in the book ‘Mphyanga’ (‘This is mine!’), where a victim – after years of silent suffering – finally speaks up and makes its own voice heard.

Laweki’s book has two major sections: the first on the history and the role of the Catholic church, the second on the history of the liberation movement and its internal conflicts in Tanzania during the late 1960s, ending with the summary execution of important dissident figures including Father Mateus Gwenjere, Uria Simango and Lázaro Kavandame. The first half is about Gwenjere’s childhood and Catholic education in a church, deeply divided between what the author – according to the exposé made by Mateus Gwenjere at the UN General Assembly in 1967 – calls the two opposing churches: ‘the Portuguese Salazarist’ and ‘the Roman Catholic’. The first was sanctioned by the Concordate of Salazar with the Vatican in 1940. It literally considered the church as an instrument ‘in the interest of the colonial empire’ and pratically behaved like that, at least indirectly through bishops, who had to be selected and approved by the State. The second type of church con-sisted in the growing opposition to the first and was centered around the person of D. Sebastiao Resende, the exceptional first bishop of Beira (1943-67). He himself, during his first years in Beira, had eye-opening experiences and was confronted with the injustices in the country and was also influenced by trailblazing missionaries.

The church-state relations had been deeply linked and interwoven over 500 years (1498-1998) by the so-called ‘Padroado’, the system and mentality of patronage, whereby the Pope had entrusted the King of Portugal with conquering and baptizing the Eastern hemisphere of the globe, while the crown of Spain got the Western, latin-american one. Both colonial powers claimed to be dedicated to ‘conquista’ and to ‘christianisation’ but firstly, they were interested in gold. That is why the Portu-guese, having a vice-king in Goa and a representative on the island of Mocambique, tried very early to  penetrate the valley of the Zambeze in the direction of the kingdom of Monomotapa (Great Zimbabwe), where the first Jesuit was killed in 1561.

Over the centuries Jesuits and Dominicans created their missions down- and upstream from Sena, but since they were always dependent on the whims of some local governor or mood of a fragile captain, no authentic local church was ever possible there. The kingdom and later the republic of Portugal itself was too weak to compete with stronger colonial powers in Southern Africa, therefore after the Conference of Berlin 1884/85, it had to rely on companies (called ‘majestáticas) and also on missionaries from foreign countries. That is how after World War II amongst others, the first ‘White Fathers’ arrived in the then largest diocese Beira and started various missions north and south of the Zambeze river in the 1950s and 60s, where Gwenjere himself was born and grew up.

The main focus of the first half of the book on the Catholic church, deals with the work of those missionaries, as seen by the Portuguese secret Police PIDE, basing itself mainly on the archives of PIDE in Lisbon, with numerous denunciations made against individual priests or the bishop himself, who progressively took their defense. In early 1967, after Resende’s death, the regime made sure they would have only trustworthy and cooperative bishops. But this only deepened the internal conflicts within the church, because most of the missionaries were encouraged by the outcomes of the II Vatican Council (1962-65) and accompanied the growing decolonisation process all over Africa. The author picks out Charles Pollet, a White Father, as the most advanced in thinking and practise and who was expelled in 1967, soon after Resende’s death. Pollet worked in Murraca, the birthplace of Gwenjere, and became very influential for Mateus Gwenjere’s own development. Gwenjere had been rather docil and lusophil before he was ordained priest in 1964, but afterwards became, together with Pollet, very outspoken for independence and against colonialism. That is why Gwenjere himself had to escape to avoid imprisonment by the PIDE.

Pollet continued, while in exile in Tanzania, to support refugees from Mozambique and helped many to continue their studies; that is why the author also dedicates the book to him. The further itinerary of Mateus Gwenjere in exile and specially inmidst of the existing tensions and conflicts he faced inside Frelimo is described in the second half of the book. The first half concludes by showing clearly that there existed two different and conflicting types of church in Beira. On page 146 he refers to the „Kairos document“ of South Africa from 1985, which differentiated three types of churches: (1) one of the ‘apartheid regime’, justifying racism and human rights violations, (2) a second rather ‘spiritualistic’ one, just concerned about itself, (3) a third ‘prophetic’ one, identified with the people and denouncing injustices and fighting against structures and ideologies justifying them. Hereby the author strongly challenges the past and present Mozambican hierarchy to finally distance itself from the church’s past involvement in colonialism.

Now this second half of the book is – like the history of Frelimo itself – conflictual and therefore for outsiders more difficult to understand, but it is necessary and worthwhile to read in order to get an understanding of the contradictions inside a liberation movement. Outsiders are less prepared to accept the author’s position of seeing the reason for internal divisons predominantly in regional differences and conflicts between northerners, southerners  and central Mozambicans, and their respective fights for political power. Ideological positions and pacts also played an important role quite early, even before the aggression by apartheid-South Africa drove the Frelimo government fully in the hands of Marxist allies. Comrades across the border would benefit from reading this book, which can lead to a better  understanding of the background which has led to the persisting traumas. Hardening positions led to exaggerations and massacres by both sides and also to summary executions of dissidents by Frelimo. This constitutes the second challenge of this book to the current generation of Frelimo’s leadership: to admit transgressing the moral order or violating human rights even as they fought for liberation or in the name of revolution.

This apparently is asking for extreme forms of heroism from people on both sides, starting with teams of committed and supporting persons. Therefore, the preface of the book features the most meaningful contribution of Fr Michael Lapsley, a witness of South Africa’s own itinerary of suffering and its ongoing healing of memories. This transforms this book into a unique appeal for reconciliation and for the willingness, to admit traumas and to allow a process of healing the memories of all citizens. The author picks this up again in his very last chapter, asking all sides to reach out to former enemies.

In short this book is also an interesting case study and gives some insights into the contemporary history of Mozambique which have previously been overlooked. Beyond the individuals, it exemplifies the structural dilemmas and also the important significance of individual choices made. This can offer insights and energy for the challenges, partly hidden up to now, but most urgent in the immediate future. Fr Michael Lapsley himself handed over a copy of the book to Pope Francis in a private audience in June. Now just weeks ahead of the visit of Pope Francis to Maputo, such inputs to public debate unveil the urgency and the opportunity of sincere reconciliation and of „definitive peace“ for all parties concerned.

(former missionary in the diocese of Beira expelled in 1971 by Portugal, after Independence worked in the Ministry of Education and Culture in Maputo, and later as project manager in the Austrian Development Cooperation and lecturer at the University of Vienna)