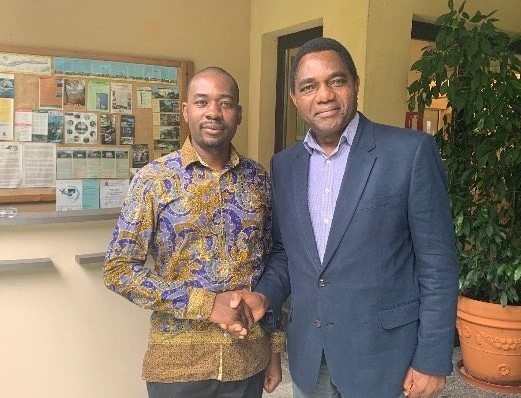 In a statement on Monday morning, MDC Alliance Secretary for International Relations, Gladys Kudzaishe Hlatywayo, said Hichilema’s victory is a triumph for democracy in light of the growing authoritarian consolidation in some regional countries. Pindula News is publishing Hlatywayo’s statement in full below:

CONGRATULATORY MESSAGE TO ZAMBIA’S PRESIDENT-ELECT AND THE UPND PARTY

The MDC Alliance extends its warm congratulations to President-Elect Hakainde Hichilema and the United Party for National Development (UPND) for their resounding victory in the just-ended August 12 elections in Zambia.

This election victory is a triumph for democracy in light of the growing authoritarian consolidation we have witnessed in countries such as Zimbabwe and Swaziland.

The UPND is our sister party and we have exchanged notes over the years to further the cause of democracy and good governance in our respective nations. We draw many lessons from the Zambian story.

Over the last few days, Zambians have engaged in an orderly and democratic electoral process characterized by a high voter turnout and the respect of the will of people in line with the Constitution of Zambia, regional and international norms and practices.

Zambians have yet again demonstrated that they are a beacon of democracy with a rich heritage of peaceful transfer of power since 1991 when Zambia’s first President, His Excellency the late President Kenneth Kaunda, graciously vacated the seat of power following an electoral defeat.

To this end, we urge outgoing President Edgar Chagwa Lungu to concede defeat and allow for a smooth transfer of power.

We also congratulate Zambia’s state institutions for protecting the will of the people and upholding the rule of law.

We appeal to all countries in the region especially Zimbabwe to learn from the Zambian experience.

In particular, we call for state institutions to serve the Constitution and not partisan interests.

It is imperative to respect the will of the people rather than subvert it. Democracy must prevail in the SADC region!

We wish the new administration in Zambia a fruitful tenure characterized by respect for the values of democracy, prosperity and uplifting the lives of the people of Zambia.