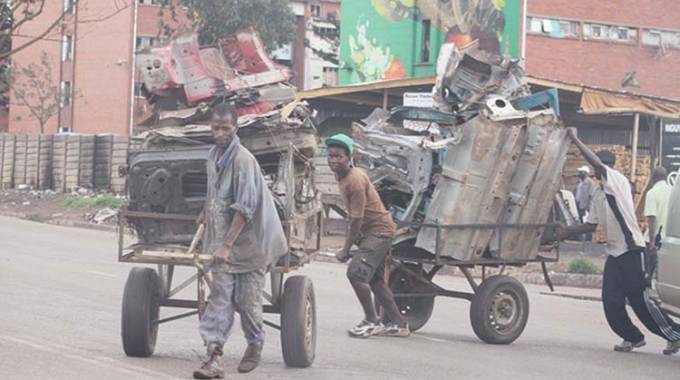 Ishemunyoro Chingwere  Business Reporter
Zimbabwe could save at least $11 million per month and hundreds of jobs if it stops exporting scrap metal and beneficiate it locally, the Zimbabwe Institute of Foundrymen (ZIF) has said.

The foundry industry entails the conversion of scrap metal into viable engineering products, but the local industry is currently running on about 10 000 tonnes of scrap metal per month against its monthly requirements of 27 000 tonnes.

The main foundry end product are mill balls, which are used in gold mining especially in small scale operations and the sector uses several tonnes of mill balls per month.

The shortage of scrap has further been compounded by continued exports mainly to South Africa despite local foundrymen’s willingness and capacity to consume all the available scrap metal at competitive prices compared to what is obtaining across the border.

Zimbabwe has a scrap metal ban in place, but from time to time, companies apply for waivers to export a facility that, however, in some cases go on to be abused.

Other countries in the region have also banned the export of scrap metal.

In a statement to The Herald Business, ZIF said exporters of scrap are realising just $67 per tonne from scrap exports after factoring in transport and logistical costs, which falls far off the impact that befalls the economy when the mining sector then imports finished goods like mill balls from foundry products.

On average, ZIF said iron and steel scrap in South Africa fetches an average $167 per tonne while hiring a 30-tonne truck to the market costs $3 000, which translates to $100 per tonne.

The mining sector, however, spends an average of $1 250 per tonne importing mill balls.

“The domestic foundry industry is able to add value on the scrap up to six times on the lowest scale, for the domestic market, while other ZIF members add value up to 28 times for the export market,” said ZIF vice president Itai Zaba.

“The range of beneficiation ratios of six to 28 avail much more foreign currency benefit than that from the export of scrap metal.

“Production for the domestic market effectively makes unnecessary the need to import, thus contributing to import substitution, whereas production for export brings in multiples of foreign currency compared to export of scrap metal.

“The main domestic end users of the foundry products are the gold mines, who consume about 800 tonnes of mill balls per month totalling about $1 million of actual import substitution per month.

“To produce this much, a total of 1 200 tonnes of scrap metal will be required, and if exported this amount of scrap will bring only $80 000 (which is) about 12 times less into Zimbabwe, in addition to loss of employment,” he said.

The shortage of scrap and foundry coke as well as other viability problems saw 22 foundry industry players have closing beginning in the 90s.