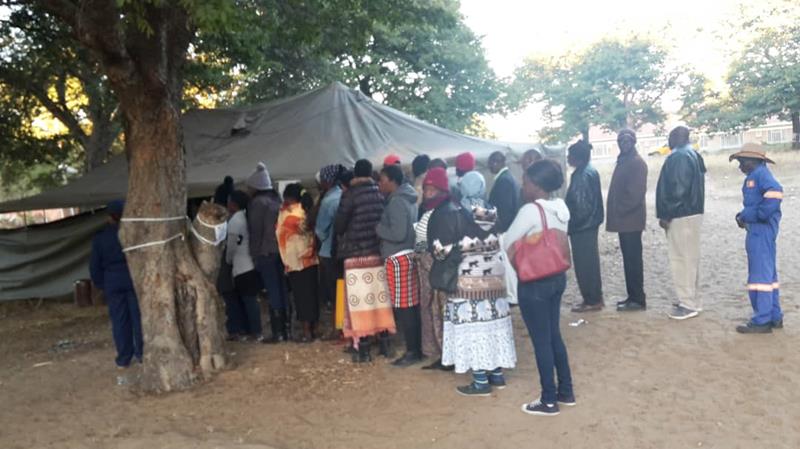 HARARE – There was a missing polling station in Glen View North
Constituency in Harare as polling stations opened yesterday, the Election
Resource Centre has said.

“The polling station that was meant to be situated at Glen View 1 Shopping
Centre could not be located.

Potential voters who were allocated to the polling station in question
were reportedly wandering in the area as they had not been briefed on the
way forward.

“Efforts to vote at nearby polling stations were in vain as the potential
voters were also turned away. The Zimbabwe Electoral Commission (Zec)
officials at the Command Centre in Glenview acknowledged the polling
station is indeed missing and notified the Election Resource Centre (ERC)
that affected voters must go to nearby polling stations failure of which
the irregularity will only be rectified during the next voter registration
exercise,” ERC said in a statement.

Zec was not immediately available to respond to the accusation.

ERC also said there was confusion surrounding allocation of polling
stations resulting in disenfranchisement of would-be voters in some parts
of the country.

“Chirumana villagers in Hwedza North who were allocated to Chigwedere
Primary polling station could not cast their votes following re-allocation
to Chamatendere Primary School. Their names could not be found at both
polling stations. The relevant Zec district officer reported that their
names may have been rejected by the biometric voter registration system to
avoid `double entries’,” ERC said in a report.

It also reported isolated reports of politically motivated intimidation
associated with recording names of voters in certain parts of the country
particularly in rural areas, including Mwenezi West. ZimRights, meanwhile
also reported cases of political party candidates and community leaders
writing the names of people who came to vote have been recorded in some
areas.

“For instance such a case was recorded in Murewa at Nyangambiri business
centre and Mt. Claire Mission, where this was allegedly being done by the
Zanu PF candidate for ward 16 near the polling stations,” it said in a
midday report.

“This was being done ostensibly to see their supporters, who will benefit
from future programmes.”

In the past, such practices have been associated with intimidation of
voters, including denying those suspected to be against the candidates in
social welfare assistance after the elections, including politicisation of
food aid, the rights group said.

ZimRights also said it had received reports of ballot papers that did not
have all or some of the details of the candidates for council in Norton,
ward 10, and Chegutu, ward 6, for the National Constitutional Assembly
(NCA) and Zanu PF respectively.

Equally, veld fires near polling stations are reported to have disrupted
voting at Donnington Farm in Norton.

“ZimRights calls upon everyone in the country to maintain peace and ensure
the election results will be respected and acceptable to all the
contestants.”

ZimRights, which has been observing the 2018 harmonised elections, had
trained observers deployed in many parts of the country.

Throughout the country since voting started at 0700hrs, it said there was
relative peace and calm.

“In terms of the polling stations, ZimRights notes that some had been
moved from their original locations without people being aware of the
changes.

“The changes have caused confusion in some areas such as polling stations
in Epworth, Glenview and Harare West constituencies.

“Because of the confusion, many people have been disenfranchised by the
polling stations movement with some people still missing their names at
the nearest polling stations.

“There are also people who have been turned away because their names were
said to be on the exclusion list,” the rights group said.