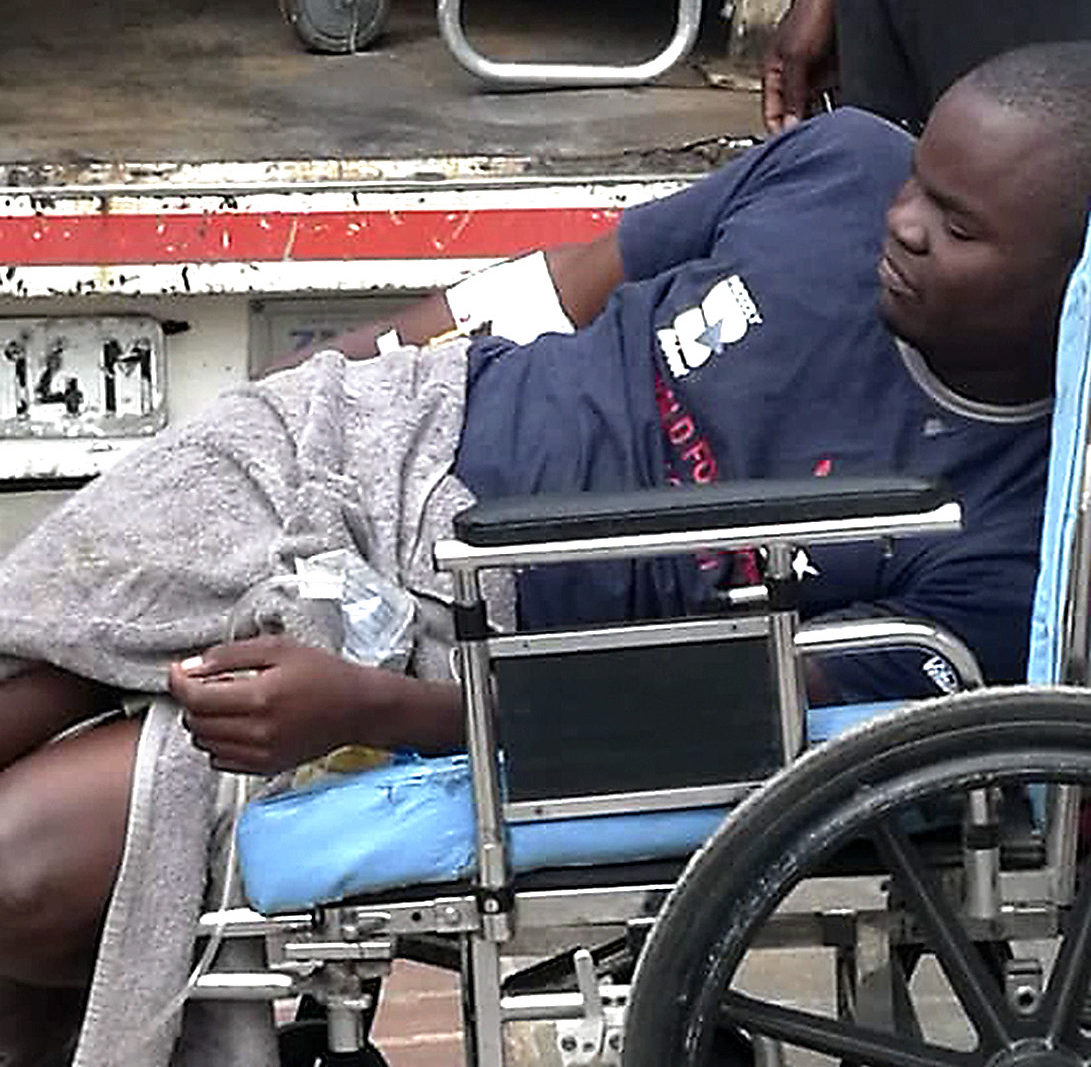 In this second part to the story of the abduction and torture of Tawanda Muchehiwa, Thandekile Moyo recounts the injuries suffered by her research assistant and the mounting evidence that the torturers were an unholy alliance of state security agencies, aided by a private car rental company.

After the shock of seeing the pictures of Tawanda Muchehiwa’s deep open wounds had worn off, I didn’t know how to react to his reappearance. Before they released him all I was living for was news that he was back home, but his return did not bring with it the expected elation and relief. I was angry, blind with rage; I remember asking myself what animal had taken him?

For the next few days, night time was the worst. It was when the world was quiet that I was engulfed by questions of what kind of people abducted Tawanda Muchehiwa? Were they normal people? Normal looking? Normal talking? Do they live among us? How old are they? What does it take to be so evil?

I wondered about their age because you see, Tawanda is only 22. So I wondered if his abductors were his age mates. Or grown men, old enough to be his father? What kind of people are capable of committing such crimes? Are they parents? Are they married?

My heart was broken. It is still broken. The pain doesn’t end, it just keeps increasing. Whoever did this has to pay. They have to be found. They have to be punished. Emmerson Mnangagwa and his government and party, on whose instruction and behalf people get abducted, disappeared and tortured, must be held accountable.

The perpetrators gave Tawanda a message for me.

They told him they almost caught me at a roadblock some time ago and regret not having abducted me on that day. He was told to inform me that they are lusting after me and when they do finally catch me, they are going to rape me.

After giving his statement to the police on the night of his arrival, Tawanda was admitted to hospital. His doctors discovered worse horrors than his external wounds showed. They discovered internal damage, particularly to the kidneys, and he had to begin dialysis to address the renal failure.

Tawanda explained that he had been forced to eat food dipped in something resembling paint. He says when he first entered the car, his abductors had sprayed a chemical that left his private parts itching. They later on laughed and told him after they were done with him, he would be unlikely to ever have children.

Before the expiry of the 72 hours the magistrate had given the police, a police ambulance took bedridden and terribly unwell Tawanda from the hospital and drove him to court to produce him before the magistrate, who is said to have failed to hide his shock upon seeing the state Tawanda was in. That act in itself, of producing Tawanda as per the habeas corpus, was an admission of guilt by the Zimbabwe Republic Police.

This is because after Tendai Masotsha was mysteriously released by the police, she made a choice not to sound the alarm on Tawanda’s abduction.

Many occurrences worked in Tawanda’s favour that day. His abductors left a trail of evidence. But I believe the most significant factor was the presence of his cousins on that day. It not only saved Tawanda’s life, but led Zimbabwe to the first known recording of a state-sponsored abduction.

The case of Tawanda Muchehiwa has brought to the surface a lot of the Zimbabwean government’s criminal activities. For some reason, the state security agents who abducted Tawanda, made the not so clever decision of also abducting Tendai Masotsha and Tawanda’s two cousins who had left them in the car while they went into the store. The arrest of these three became the first piece of evidence that the Zimbabwe Republic Police was involved in the abduction of Tawanda Muchehiwa.

They sped off with Tawanda in a separate car from his companions who they then took to Bulawayo central police station. They were formally booked in and kept in police custody. Police could not satisfactorily explain to the lawyer why they had only three people in custody yet they had arrested four. This proved beyond reasonable doubt that the people who abducted and disappeared Tawanda did so in a joint operation with the Zimbabwe Republic Police.

As luck would have it, it turned out there was CCTV footage of the abduction. Unbeknown to Emmerson Mnangagwa and his government, CCTV cameras had captured everything from the time the cars that abducted them (at least five of them) arrived at the scene.

They staked out the area for a long time before they zoned in on the car Tawanda and Tendai Masotsha were in. The video shows several men get out of the abductors’ cars and swiftly grab Tawanda and take him into a white Isuzu twin cab that immediately sped off, only to stop a few hundred metres away from the abduction scene.

The video goes on to show Tawanda being transferred from the white Isuzu into a white Ford Ranger. The two cars then sped off in different directions. Tawanda’s lucky stars must have been shining on him on that fateful day because one of the CCTV cameras managed to capture the car registration number of the Ford Ranger Tawanda was transferred into.

Further investigations by Zimlive newspaper revealed that the car was owned by a man from Ruwa, Zimbabwe, and that the owner had leased his car to Impala Car Rental. A car rental company that leases cars from individuals and hires them out!? Impala has branches in both Zimbabwe and South Africa.

The Ruwa man expressed shock and ignorance that his car had been used to abduct and disappear Tawanda Muchehiwa.

The discovery was a big break in the case. The CEO of Impala Car Rental, Thompson Dondo, was contacted but he refused to give out information on who had hired the car. Impala conceded that their vehicles had tracking systems which meant that it would be possible to tell where Tawanda had been taken and tortured.

In a bizarre twist, Impala Car Rental later gave the investigative reporters a fake name and a nonexistent address of the client, leading the reporters on a wild goose chase.

With that, the court of public opinion declared him guilty of obstruction of justice. Many now suspect that the company could actually be owned by the state security and that Dondo is just a front. When Tawanda’s lawyer obtained a court order to seize the information from Impala, they claimed they did not have the documentation as they had given it to the police.

This cover-up was the last straw for Zimbabweans who went on a spirited campaign to boycott Impala Car Rental. The pressure was so hot that huge aid organisations such as Hivos Southern Africa, who are listed as referees on Impala Car Rental’s website, have had to put out statements distancing themselves from the company.

I will explain this in detail in the next article.

Evidence of the abduction having been state-sponsored and state-orchestrated is piling up. On the day of Tawanda’s abduction, police raided Tawanda’s uncle’s house, Zimlive editor Mduduzi Mathuthu with a search and seizure warrant. The address on the warrant, though, was incorrect.

After his return, Tawanda helped solve the mystery of the wrong address. He explained that his abductors had driven him to a bush where they tortured him in various ways and demanded he gave them his uncle’s address. In a bid to protect his uncle, Tawanda says he gave them a wrong address. Upon discovering that the address was incorrect after a team had gone there, Tawanda was beaten up and made to give them the correct address.

This, for me, was the most staggering piece of this puzzle. It exposed the extent to which state institutions were working together in the commission of this abduction. Not only were the police involved, but Tawanda was tortured to obtain an address which was then given to the magistrate.

This paints a picture of police and judiciary capture.

Institutions meant to enforce the rule of law and protect democracy and serve the people of Zimbabwe are unashamedly working to protect the Zanu-PF ideology of a one-party state.

Tawanda narrated that his captors identified themselves as the “ferret team” to staff at a tollgate they passed. The ferret team is a group made up of state security agents from different agencies including Central Intelligence (CIO), Police Intelligence Service (PISI), Military Intelligence Department (MID), and Zimbabwe Republic Police Law and Order Section. There is also evidence of the involvement of the military. Tawanda saw army trucks at the place he was kept and tortured for three days. It could have been at an army camp.

It has been nearly two months since Tawanda was abducted, disappeared and tortured by the Government of Zimbabwe. The evidence that he was abducted by the state is irrefutable and has been provided. Some of the men who abducted him are known and have been positively identified. The people who took his cousins to Bulawayo Police Station are known. The police at Bulawayo Central Police Station know who else was involved and they must name them.

So far they have done nothing. They will do nothing. They can’t investigate and prosecute themselves. The only solution is to establish an independent inquiry into the abduction.

Since all other avenues to pursue justice are directly controlled by the perpetrators, the only way to achieve accountability and justice is via a people-powered movement to free Zimbabwe. DM/MC