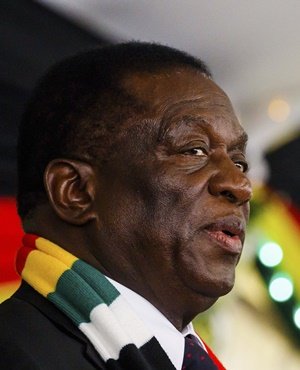 Zimbabwe’s President Emmerson Mnangagwa on Friday accused western countries of supporting violent countrywide protests in January that were sparked by a huge rise in fuel prices.

At least 12 civilians died and hundreds more were injured following a joint police and military crackdown on protesters after shops were looted and set on fire.

“We regret the loss of life but we needed to protect property as well as other citizens not involved in the protests,” Mnangagwa told local reporters.

“We have told the western countries that they cannot turn around and raise concerns when they are the ones sponsoring the violence,” the privately-owned NewsDay newspaper quoted Mnangagwa as saying.

Authorities have blamed the protests on the main opposition Movement for Democratic Change (MDC) party and on non-governmental organisations that they said were backed by western governments.

When he took over from Robert Mugabe in 2017, Mnangagwa pledged to revive the moribund economy and attract foreign investment by ending the country’s international isolation.

Police have arrested more than 1100 people, including opposition lawmakers, trade unionists and even some children as part of the crackdown, which has been criticised by the US, the European Union and Britain as well as by rights groups.

Mnangagwa, who won a disputed election in July, also announced a package of measures for state workers after strikes by doctors and teachers over poor pay.