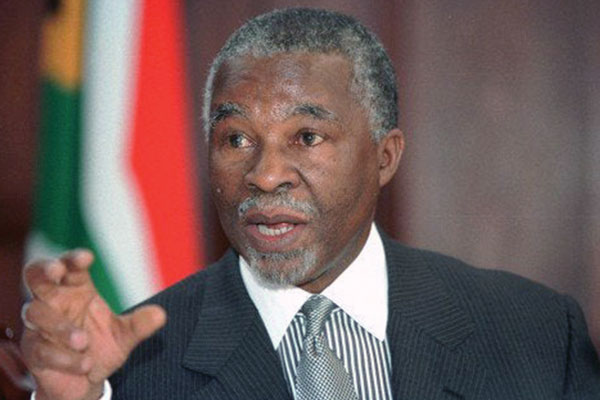 Mbeki visited Zimbabwe mid-December last year on a Sadc-initiated mission to nudge Zanu PF and MDC into negotiations. This was after regional leaders realised Harare’s problems were caused more by a political crisis than the so-called Western sanctions.

During his visit, Mbeki — famed for brokering the 2009 Global Political Agreement, which brought together Zanu PF and MDC into a unity government — also met political leaders who are part of the Political Actors Dialogue (Polad) and civil society organisations.

The former South African president promised to return to Harare by December 30, 2019, to continue with the preliminary talks, but has not done so, amid reports Mnangagwa has been ignoring calls from the respected African elder.

Before Mbeki’s visit, sources said, regional leaders had the view that Chamisa did not want dialogue, but they later realised through discussions with him and other senior MDC party officials that he was just against the idea of participating in a dialogue being held under the discredited Polad platform, which many have dismissed as Mnangagwa’s political fan club.

Sadc leaders publicly supported Mnangagwa’s rise to power on the back of a military coup against the then president Robert Mugabe in November 2017, although they privately urged him to hastily undertake political and economic reforms to legitimise his reign.

Sources told the Zimbabwe Independent this week that Sadc leaders are frustrated by Mnangagwa’s refusal to allow the Mbeki mediation to take shape. They are also frustrated by his failure to turn around the country’s political and economic fortunes, which they are convinced makes Zimbabwe the albatross on the regional grouping’s neck.

“There is growing frustration in the Sadc region about Mnangagwa’s failure to give Mbeki the chance to mediate in the political impasse. They now think that Zimbabwe is not serious about transforming its economy. There is huge disgruntlement over this issue in the diplomatic circles and the entire region,” a Sadc diplomat accredited to Harare said.

“Basically, the concerns are coming from the fact that there are many South African and Botswana companies investing in Zimbabwe and they are feeling the heat from the economic meltdown as they cannot repatriate their profits.

“The general economic environment has been very unfriendly. There was a lot of optimism when Mbeki started the moves, but all that has dissipated now. Sadc leaders are also disappointed that the political impasse in Zimbabwe has persisted for far too long.”

Mnangagwa, sources said, was confronted at a bi-national commission meeting with Botswana in Gaborone early this month. Botswana officials were frank in closed door discussions where they expressed disappointment about the investment climate, among other issues.

Botswana officials cited the decision by the Mnangagwa administration to cancel a deal late last year for the revival of Kwekwe-based firm Lancashire Steel with Botswana-based investor Whinstone Enterprises without revealing the reasons, as an example of the toxic investment climate.

Implementation of the deal, signed in July 2018, was accelerated at last year’s Zimbabwe-Botswana bi-national commission, but government officials frustrated the investor by dragging their feet despite a push by the Botswana company to consummate the deal.

“This is just one example of the many cases that have frustrated investors. So they were saying, in one of the plenary sessions, it is useless to sign deals with people who are not serious about implementation. If you closely examine the communique from the Gaborone bi-national commission, you will realise that there was only one deal signed and the other six were memoranda of agreement in education, wildlife, cultural exchange and similar sectors and nothing was concerning the more serious economic sectors like mining and manufacturing,” a source who travelled to Botswana said.

“Zimbabwe has presented itself to be open for business, which we believe is an appropriate approach to developing this country and economy. However, in order to attract significant flows of direct investment, it is important that Zimbabwe improves its record concerning the following issues: security of tenure and investment protection; repatriation of proceeds by investors; the honouring of bilateral trade and investment agreements; the need to open up the economy to competition; establishment of new credibilities and lastly, optimal debt servicing,” he said while addressing a Polad economic summit in Harare last month.

Many South African companies operating in Zimbabwe have been frustrated by government’s policy flip-flops and corruption. The most outstanding example is the termination of the deal to recapitalise and revamp the National Railways of Zimbabwe (NRZ).

The US$400 million deal, won by the Diaspora Infrastructure Development Group (DIDG) and South African rail, ports and pipeline utility Transnet, was cancelled in controversial circumstances in October last year at the behest of Transport minister Joel Biggie Matiza.