PRESIDENT Emmerson Mnangagwa has promised to appoint a lean Cabinet, to merge some ministries and avoid duplication of duty, departing from his predecessor Robert Mugabe’s penchant for a bloated government. 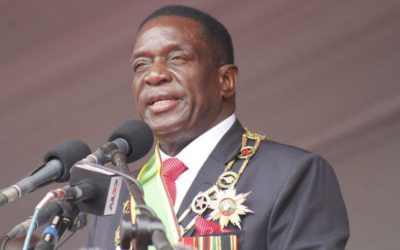 In an address to permanent secretaries at Munhumutapa government offices, Mnangagwa, who took over from Mugabe last Friday, said his new administration would focus on service delivery and job creation.

“I am currently in the process of putting together a new government structure, which should essentially be leaner,” he said.
“This, of course, will entail the merging of some line ministries in order to remove functional duplication as well as contain unnecessary expenditures, so as to enhance productivity and efficient delivery of service.”

“Those whose ministerial posts will be abolished will be re-skilled and reassigned to other areas in the public service.”
Mnangagwa further said he will not tolerate “bureaucratic slothfulness, which is quick to brandish procedures as an excuse for stalling service delivery to citizens, investors and other stakeholders.

Zimbabwe has endured an unprecedented economic collapse in the past two decades, with poverty levels increasing and unemployment spiralling.

Mnangagwa said with the high optimism being exhibited by the public, his administration could not afford to fail — warning civil servants that the honeymoon was over.

“As heads of ministries, your role is supremely critical in the realisation of the aspirations of all our citizens and stakeholders,” he said.

“I will certainly count on you for success in turning around the fortunes of our economy. Indeed, together we can do it.”

Newer Post
An opportunity to reflect on who we are, where we are going
Older Post
Mr Ugly 2017 bigger, better