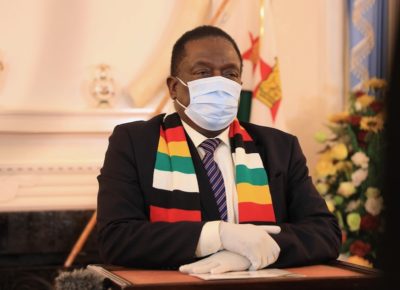 PRESIDENT Emmerson Mnangagwa’s government is set to improve the perks for the leader of the opposition after MDC-T leader Thokozani Khupe ascended to the position through the back door.

Khupe was sworn last week into Parliament alongside 14 other MDC-T officials as a direct replacement of MDC Alliance proportional representation legislators that she recalled under controversial circumstances.

She immediately took over as the official leader of the opposition, a position that was previously held by MDC Alliance’s Tabitha Khumalo.

MDC-T officials who spoke on condition of anonymity said Mnangagwa was determined to formalise his proposal to create the office of the leader of the opposition, which he first made in 2018.

Mnangagwa dangled the carrot to MDC Alliance leader Nelson Chamisa, who had rejected the outcome of the presidential election, which he argued was rigged.

Chamisa rejected the offer and Khupe is said to be now prepared to assume the position snubbed by her bitter rival.

Mnangagwa’s spokesperson George Charamba was not taking calls and did not respond to questions on his WhatsApp number yesterday.

Charamba, however, tweeted: “Leader of the opposition portfolio comes with perks.”

Kennedy Chokuda, the clerk of Parliament, said he could not comment on the alleged plans to strengthen the position.

“The position of leader of the opposition in the House has always been recognised, from way back, you recall Gibson Sibanda.

“The post is there in Parliament and the leader of the opposition is consulted when business is done.”

At the moment, the leader of the House is recognised under standing orders and rules of Parliament.

She also reportedly got two cars from Parliament, one as a constituency MP and the other for her post as leader of the opposition.

Khupe’s spokesperson Khalipani Phugeni said he was not aware of the proposals to bump up Khupe’s perks and enhance her status.

“I am not aware of that, what I know is, she will simply take over from Tabitha Khumalo,” Phugeni said.

Khupe’s associates, however, said she has been promised an office in Parliament and perks that will include pension because she will occupy a ‘constitutional’ office.

The move is allegedly meant to create an impression in the international community that Mnangagwa is tolerant of opposition parties.

Mnangagwa in 2018, during interviews with United States television networks on the sidelines of the United Nations general assembly, said he planned to give Chamisa certain perks as leader of the opposition.

The gesture was seen as an attempt to end the dispute that ensued after the July elections where the MDC Alliance accused the Zanu PF leader of rigging the elections.

Chamisa declined the offer saying he was voted to go to State House, not Parliament.

At the time Ziyambi said the constitution could be amended to allow Chamisa into Parliament since he was not an elected MP.

Charamba said then that the office was going to be created as Mnangagwa’s capacity building measures.

Khupe and Mnangagwa are alleged to be working together to destroy Chamisa, an accusation they both deny.

They are allegedly plotting to have all Chamisa MPs recalled, a development to allow Zanu PF to amend the constitution to raise the presidential running age limit to 50 to block the MDC leader, who is in his 40s.

Zanu PF is also allegedly plotting to form a unity government with Khupe and suspend elections until 2027 to effectively shut Chamisa out.