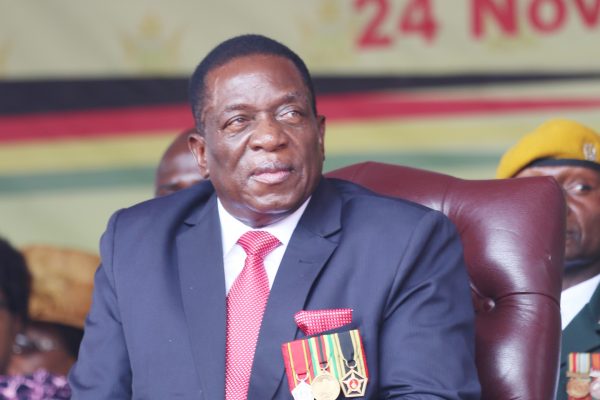 President Emmerson Mnangagwa met one of former president Robert Mugabe’s top allies, Ambrose Mutinhiri, amid indications that the Zanu PF leader is on a charm offensive to lure back his foes into the ruling party.

Mutinhiri last year wrote a stinging letter criticising the coup that saw Mnangagwa taking over from Mugabe in November last year and went on to dump Zanu PF.

He was one of the 23 candidates that took part in the July 30 presidential elections, where he performed dismally.

However, last Wednesday he met Mnangagwa, where it was agreed that the former Mashonaland East Provincial Affairs minister would be cleared to rejoin Zanu PF.

Mutinhiri initially denied the meeting ever happened, but later confirmed it. He promised to issue a detailed statement about his tête-à-tête with Mnangagwa.

“The only thing that I can confirm at the moment is that yes I met with the president at my own initiative and the main agenda really was that I wanted to congratulate him on his victory and inauguration,” he said.

“The statement, which I am going to issue, I think, will have other issues not related necessarily to that meeting.”

Mutinhiri led a faction of the National Patriotic Front (NPF) after the party split on the eve of the elections. The other faction backed MDC Alliance leader Nelson Chamisa in the presidential race.

Before he was appointed founding NPF leader, Mutinhiri met Mugabe at his Harare mansion.

In a statement released yesterday, Mutinhiri’s faction said it backed the Zanu PF government because it had been elected by the people.

Mutinhiri said he was confident Mnangagwa’s government would not let the people down.

“We do not want to fight the elected Zanu PF government,” the Mutinhiri faction’s spokesperson Silence Nhamburo said.

‘It is ready to attack the challenges we are facing by engaging fresh blood in the cabinet, hence technocrats who have vision and sound economic turnaround principles.”

Jealousy Mawarire, the spokesperson of the other NPF faction, said he would not comment on Mutinhiri’s statements because Mutinhiri was fired from the party long back and his utterances were thus personal.

Meanwhile, Zanu PF has also approached other former ruling party officials that were fired as a result of factionalism during Mugabe’s time.

Former Zanu PF secretary for administration Didymus Mutasa, who was fired alongside former vice-president Joice Mujuru on allegations of trying to topple Mugabe, confirmed the ruling party had made overtures to him.

“They invited me yes and I have since written a letter to them. They said everyone who wants to come back must come,” he said.

Zanu PF secretary for administration Obert Mpofu claimed the list of those that they wanted back in the party was endless and they were also receiving various enquiries from many former members who want to come back.

“The president is on record for having an open-door policy and that everybody must come back to Zanu PF and even those who were not Zanu PF to come back to the fold so that we can build this country together,” Mpofu said.

“The president has publicly pronounced his wish for people to combine forces in rebuilding Zimbabwe and it is not surprising that he is welcoming those that are embracing the new dispensation.”

He said there was nothing sinister in Mutinhiri and Mnangagwa meeting.